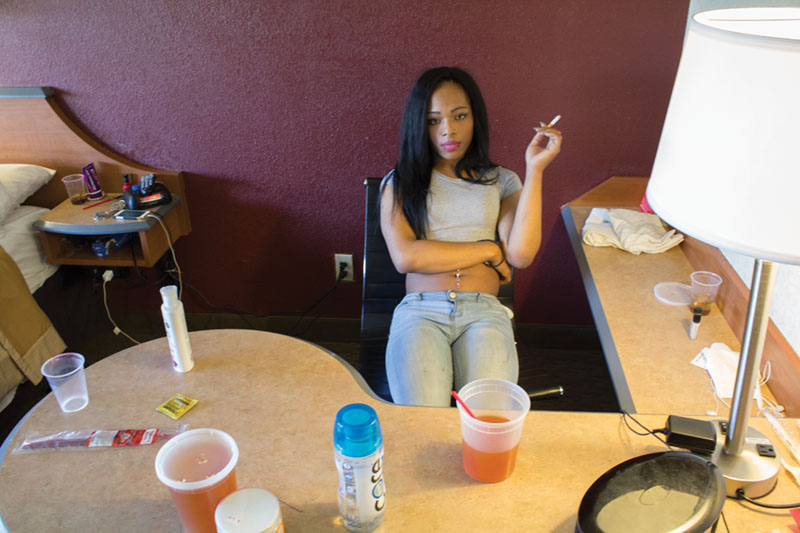 Selena Rose Cruz pops a Xanax. She says it helps with her anxiety. The man who sold her the sedatives wanted oral sex, but she insisted on paying in cash instead.

At 22 years old, Cruz is on the clock, engaging in her trade as a sex worker. She is homeless, but has made enough cash to operate out of an economy hotel in the greater Washington area. Cruz makes $80 to $180 per client, depending on whether they want a quick session or a full hour. Her $70-a-night room is essential for both her work and her security, as she prefers in-calls — where clients come to her, rather than meeting them elsewhere. She says it’s safer that way.

“This is definitely for survival,” Cruz says. “If I don’t make any money today, tomorrow I could be outside on the street. I need to be inside where at least I can be safe and comfortable. Being outside is just going to put me in more danger.”

Cruz hasn’t always been homeless, and it’s only recently that she’s had to put herself in dangerous situations with men she doesn’t know. She grew up with her parents in Winchester, Virginia, but her lack of stable housing began when her father gave her up for adoption, handing her $100 and abandoning her when she was just 17 years old.

“My dad kicked me out because I was gay,” she says. “But at the same time I wasn’t. I was transgender, I was feminine. I wanted to wear girl’s clothes, I wanted to be a girl. I thought a woman’s body was so amazing. I’ve felt like a woman since I was five.”

Cruz wound up at the Henry and William Evans Home for Children in Winchester, Virginia. When she was 18, she ran away and was eventually arrested for being homeless. She now faces the threat of arrest every day by engaging in an illegal line of work.

Cruz’s story is far from unique. Extreme levels of unemployment and poverty lead many LGBT individuals to become involved in underground markets — such as sex work — in order to survive.

“We’re always concerned about LGBT youth that are involved in sex work,” says Eddy Ameen, co-chair of the DC Center’s Youth Working Group. “When you are homeless and potentially even a minor, you can sell things like drugs or your body, or beg for spare change.”

Growing homelessness among the city’s LGBTQ youth is something Mayor Muriel Bowser is working to solve. Bowser’s commitment to ending homelessness, especially for LGBTQ youth, started as a councilmember when she helped spearhead 2014’s LGBTQ Homeless Youth Reform Amendment Act. It required annual reports on addressing the needs of LGBTQ homeless youth and stipulated that a minimum number of dedicated beds be made available.

“When you are homeless and potentially even a minor, you can sell things like drugs or your body, or beg for spare change.”

“Our office’s focus is to make sure that as the city is developing their youth prevention plan for homelessness, that we have a real focus on making sure that LGTBQ youth are at the forefront,” says Darrell Gaston, housing specialist with the Mayor’s Office of LGBTQ Affairs. In the two years since the law passed, the amount of beds dedicated to LGBT youth has increased threefold. “We only had about eight beds, and now we have over 27.”

That’s still far from enough, but building capacity is a priority. This year, Gaston’s office issued a total of $25,000 to local organizations strictly for the purpose of providing shelter to more LGBTQ homeless youth. Five grants of $5,000 were given to HIPS, the DC Center for the LGBT Community, Casa Ruby, the Wanda Alston House, and SMYAL.

Seventeen of the dedicated beds can be found at Casa Ruby, which operates two shelters for LGBT youth. Its emergency shelter has five beds and its transitional facility has 12, where residents can access a range of services including behavioral health services, metro tokens, and legal immigration assistance. Last winter, Casa Ruby also ran a temporary hypothermia shelter, with more than 50 people as young as 16 years old seeking refuge. Its efforts have helped establish Casa Ruby as a main point of entry for LGBT youth living on the streets.

“We learned that it is very, very important to open lower-barrier emergency shelter beds for youth. When people have been homeless for a long time, it takes a lot of effort and learning and unlearning behaviors for them to comply with shelter rules,” says Larry Villegas-Pérez, Casa Ruby’s director of social and mental health services. Providing accommodation without requiring commitments allows the youth to engage with their services, build trust and learn that “somebody else cares for them and their well-being.”

“Many of these kids are part of a pipeline, from homelessness to survival sex work, to being HIV positive, to being arrested, to coming out of jail with no skills and no place to stay.”

However, D.C.’s homeless youth problem continues to grow — something many conflate with other jurisdiction’s failings in LGBT matters. “D.C. may be a haven for queer youth who run away or don’t have family to fall back on from more rural or conservative places in our neighboring states,” says DC Center’s Ameen.

“A kid will get on a bus from Kansas and say, ‘I heard that D.C. is very progressive and helps LGBT youth. Can you help me find a place to stay?’” says Sheila Alexander-Reid, director of the Mayor’s Office of LGBTQ Affairs. “That’s the reputation we have in the country. Very few states have this commitment that D.C. has to its LGBTQ community in general.”

That reputation isn’t always reflected in the experiences of D.C.’s LGBTQ youth. Discrimination in housing and employment still occurs, even though it is illegal, leading to a vicious cycle of homelessness.

“Many of these kids — particularly the transgender youth — are part of a pipeline, from homelessness to survival sex work, to being HIV positive, to being arrested, to coming out of jail with no skills and no place to stay,” says Reid. “We really are trying to break the cycle, and it starts with these kids when they’re kicked out of their homes.”

However, breaking that cycle is made exponentially harder when there’s money to be earned in illegal trades. With high youth unemployment, a dearth of well-paying jobs and the added factor of homelessness, sex work and other activities can be an easy — if extremely risky — way to make money. For Selena Rose Cruz, the math is simple: she earns more selling her body than she made during a short stint washing hair at a trans-friendly salon.

“I get why people don’t like it, but it’s none of their business. It’s my body, I can do what I want,” Cruz says. “If this is the easiest way that I can survive and make money, I wanna do it.”