"An Octoroon" is a brave, chaotic, wonderfully-acted play, but it lacks intellectual cogency

If you have been in the mood to shake up your social and cultural identity perceptions, this has been the theater season for you.

There has been Arena’s Disgraced, with its Muslim-American protagonist and his post 9/11 struggles, a female Bottom, courtesy of the Folger Theatre’s A Midsummer Night’s Dream, and the Shakespeare Theatre Company’s Taming of the Shrew with its gender-rattling all-male cast. If that isn’t enough, now comes Woolly Mammoth’s An Octoroon (

), Branden Jacobs-Jenkins’ contemplation of race via a zanily-provocative adaptation of a late nineteenth-century play by Dionysius Lardner Boucicault.

Of all of these challenges to identity perceptions, Jacobs-Jenkins’ is certainly the boldest. Riffing on the late-Victorian era, in which black characters would have been played by whites in blackface, he goes hell-bent-for-leather first in mixing and matching face paint and races and then in writing them into roaring stereotypes, per Boucicault’s melodramatic style. If this isn’t enough, he throws in a couple of female plantation slaves who sound like they could be sitting in the next cubicle. And just in case you don’t get the point that we are travelling down Jacobs-Jenkins own unabashedly hallucinogenic rabbit-hole, there is, in fact, a giant rabbit around.

If this sounds like chaos, rest assured it’s contained. It may feel like a throw-together of vaudeville, sketch comedy and some kind of “pick-up” theatrics, but it is highly choreographed entertainment and — thanks to director Nataki Garrett’s ability to spin plates in the air — delivers a steady stream of interesting moments and ideas. And there is something palpable that unites the antics, a tone that is never fully comic nor fully tragic (save for one moment of historical reality), but is more accurately described as ambivalent. It is strongly “meta,” not only because the modern playwright character BJJ occasionally breaks in to talk to the audience, but in it’s very approach to the material. There is no moment here that doesn’t comment on itself, ironically or otherwise. It is an interesting and effective lens, one that adds a layer of wit and provocation and also successfully asks: what do you think?

Though it arrives through a hedge backwards, the plot of the original play remains intact, following — at least schematically — Boucicault’s melodrama centered around plantation life. It’s a story allowing for plenty of modern reflection on race relations, past and present, and Jacobs-Jenkins’ choice to work it, without question, makes one think — and laugh. Whether it makes one feel is another question.

And this is where the tumultuous marriage of the rather labored Boucicault and the rather frenzied Jacobs-Jenkins comes into play. Apart from a projected image that arrives two-thirds of the way into the production, between these two extremes there just isn’t much space in which to feel. There is too much vaudevillian chaos, too much arch and wooden language, too much OTT caricaturing, too much breaking of the fourth wall, and too much fisticuffing in the final scenes.

With this much going on, it takes a strong cast to bring not just the momentum, but the clarity of ideas. Carrying the production, without doubt, is Jon Hudson Odom, playing not only the playwright BJJ but also the two white leads, George and M’Closkey (in white-face). Odom ably distinguishes between his three characters, leaving the slightly snarky, slightly sanctimonious BJJ his most memorable. His ability to offer a powerful, intense presence in all his roles is a good one — he is a strong anchor in the melee.

But as essential as Odom is, the real joy here — and much of the humor and pathos — come with Minnie and Dido, the two slaves who appear in interludes to comment on life on the plantation and the goings-on of the white people. Speaking in modern vernacular, these women suggest the separate worlds of Boucicault’s age, but also of our own. They are the voices of people who have no choice but to deal with their “otherness,” and yet in doing so they rise above it, turning the tables to reveal that everything is, in the end, relative. None of this would have come through without the stellar performances of Shannon Dorsey as Minne and Erika Rose as Dido and their immensely convincing chemistry. They steal the show.

That said, the ensemble is strong, with Kathryn Tkel delivering a sweetly earnest Zoe, Jade Wheeler a very comical Grace, and Maggie Wilder playing it to the hilt with her Southern Belle, Dora. As Pete and Paul, the two male slaves, Joseph Castillo-Midyett is best as the older man, channeling racist caricatures that bring some good laughs, but also subtly suggesting the ambivalent struggle to stay in favor. James Konicek creates a suitably big presence in his roles, even if he doesn’t quite sync into Jacobs-Jenkins’ pacing and rhythms. Jobari Parker-Namdar keeps it subtle with his Br’er Rabbit and completely hilarious with his steamboat captain, Ratts.

These excellent players bring out the best in Jacobs-Jenkins’ crazed ride, but they can’t quite cover for what’s missing: the kind of intellectual cogency that leads us somewhere new. It’s a conclusion complicated by the fact that this is the same Jacobs-Jenkins that penned last season’s superbly insightful, nuanced and often hilarious, Appropriate — another vision of the South and its complicated legacy. Such disparate work reveals a talented playwright who is brave enough to experiment. Hard to fault, if sometimes hard to follow.

Check for discount tickets to see An Octoroon

An Octoroon at Woolly Mammoth Theatre 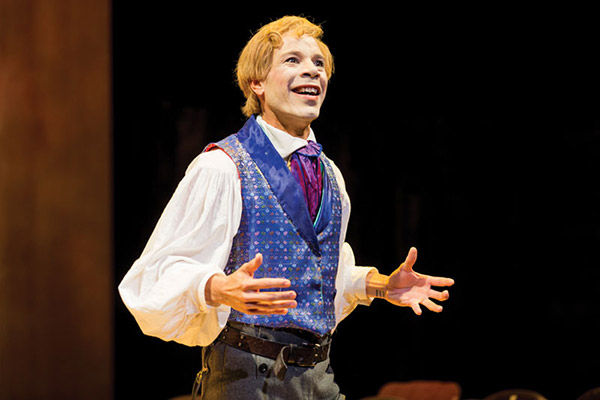