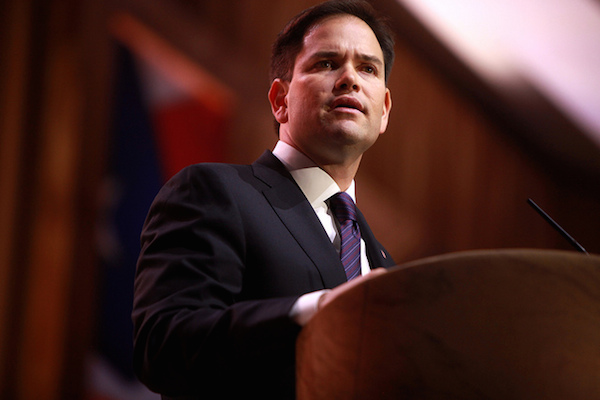 America has two troubling constants. First is that with such an overwhelming number of guns in our society (about 4 million of them rifles) and lax regulation, mass shootings are going to happen. Second is that when those mass shootings do occur, politicians will offer their “thoughts and prayers,” then resume taking NRA funds to block any attempts at curbing future shootings.

After yesterday’s tragic events in Orlando, however, that second constant has taken on a rather twisted nature. As condolences flocked in for the families and victims of the Pulse Orlando nightclub massacre, which left 50 dead and another 53 injured, among them were a number of staunchly anti-LGBT politicians.

Given Pulse was an LGBT nightclub and the dead are presumably mostly LGBT or queer-identifying, we have an odd dichotomy where many politicians who work tirelessly to strip rights from LGBT people are expressing sadness at a barbaric event in that community. Of course, expressing condolences is only human; the problem is that these same politicians helped engender the environment that led to so many deaths.

Whether through anti-trans bathroom bills, attempts to block marriage equality, discriminatory “religious freedom” laws, or just being openly homophobic or transphobic, the conservative Right in America has helped foster a section of our country that is entirely hostile to LGBT people and everything we stand for. While they predominantly focus on the religion of yesterday’s shooter, Omar Mateen’s father offered another explanation for why his son brought a rifle and a handgun into an LGBT nightclub: he just didn’t like gay people.

“He saw two men kissing each other in front of his wife and kid and he got very angry,” Mir Seddique told NBC News.

Mateen, a U.S.-born American citizen, grew up in a country that, at least in part, fosters anti-queer sentiment. These same politicians that rushed to condemn his actions help to further that sentiment. It was a connection that many on Twitter seized upon.

You know what is gross – your thoughts and prayers and Islamophobia after you created this anti-queer climate.

I learned he used guns and targeted the same people you and your friends do. https://t.co/E45DA7J0AY

You’ve palled around w/a pastor who has called “for the death penalty for homosexuals.” You are part of the problem. https://t.co/kToifohyVJ

Let’s take a look at some of the politicians who offered condolences and tweets yesterday.

Please join Janet and me in praying for the victims of the Orlando attack and their families.

Mike Huckabee, former Governor of Arkansas and failed presidential candidate, believes gay relationships have the “ick factor.” He opposes marriage equality, once called homosexuality a lifestyle choice like drinking alcohol, slammed the nomination of Eric Fanning, an openly gay man, as Army Secretary, and was called “disgusting” for comments he made about trans students.

Today, all of America stands in solidarity with the people of Orlando: https://t.co/cXRNXVKcrT

In a lengthy statement posted to his Facebook page, predominantly aimed at blaming Islam for the shootings, Sen. Ted Cruz made a rather curious statement.

“For all the Democrats who are loud champions of the gay and lesbian community whenever there is a culture battle waging, now is the opportunity to speak out against an ideology that calls for the murder of gays and lesbians,” he wrote.

He both belittles the efforts of Democratic politicians to halt or reverse the damage wreaked by the Republican party on the LGBT community, as well as inferring that he has the moral high ground on LGBT issues by supporting carpet bombing ISIS. From someone as vehemently anti-LGBT as Ted Cruz, that’s laughable. Indeed, he once tried to get journalists to stop commenting on how homophobic he is by saying that, unlike ISIS, he doesn’t throw people off buildings.

No, instead he considers marriage equality one of the “darkest hours of our nation,” believes that President Obama is more concerned with “promoting homosexuality in the military” than defeating extremists, and thinks that homosexuality is a choice. And let’s not get started on the ridiculously transphobic things he’s said.

Our prayers are with those injured and killed early this morning in horrifying act of terror in Orlando.

Sen. Marco Rubio was one of the first to connect the dots between the shooter and the LGBT community, telling CNN “he targeted the gay community,” and urged people to donate blood for victims. However, Rubio also focused on Mateen’s religious background, blaming the shooting on Islamic extremism. He then said: “We have seen the way radical Islamists have treated gays and lesbians in other countries.”

It was an unfortunate choice of words, as Senator Rubio hasn’t exactly been the gold standard of treatment in Florida. He openly flaunted his opposition to marriage equality during his failed bid for president, denounced marriage equality when it was legalized in Florida, opposes employment nondiscrimination protections for LGBT people, helped raise money for a backer of “ex-gay” conversion therapy, and opposes gay adoption as children shouldn’t “be part of a social experiment.”

A host of right-wing politicians offered messages or statements in the wake of the attacks, each of them ignoring their anti-LGBT pasts to mourn the lives of people they would otherwise have thrown under the bus for an extra vote.

Reminder: In May, these GOPers voted to protect federal contractors’ ability to discriminate against LGBT people pic.twitter.com/vks1Hbhut7

We’re willing to bet that quite a few of the names on that list issued condolences after yesterday’s shootings, but none batted an eyelid when it came time to strip LGBT people of their rights.

In a time of tragedy, it’s only natural to express grief, sorrow, anger or offer support to the families and friends of the victims. But when it’s a tragedy that so explicitly targeted the LGBT community, thanks in part to a hostile environment perpetuated by the very politicians who are now rushing to send their “prayers” to Orlando, a line must be drawn.

Rather than send empty tweets and issue nondescript statements, those who’ve worked so hard to keep LGBT people as second-class citizens would do well to examine exactly why someone decided to take a rifle into an LGBT nightclub.

Shoutout to pro-gun Republicans who took a break from passing anti-LGBT laws to offer thoughts and prayers to LGBT victims of gun violence.

Rhuaridh Marr is Metro Weekly's managing editor. He can be reached at rmarr@metroweekly.com.
← Previous Story Vice President Biden: Orlando victims were “our brothers and sisters”
Next Story → #TwoMenKissing trends on social media after Orlando attacks