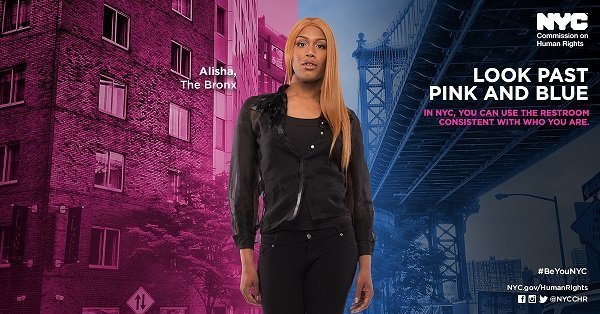 “Use the restroom consistent with who you are.”

— A Pro-transgender ad campaign that will appear across New York. On Monday, the New York City Commission on Human Rights launched the nation’s first citywide campaign to promote trans residents’ right to use a bathroom that matches their gender identity. The $265,000 campaign will appear on public transportation, phone booths, and local newspapers. According to Buzzfeed the ads will also be running in Spanish, Korean, Chinese, Russian, and Bengali language publications.

Mayor Bill de Blasio separated New York City from other jurisdictions — like North Carolina — stating “every New Yorker has the legal right to use the bathroom consistent with their gender identity, no questions asked.”

Under the city’s 2002 nondiscrimination law, the commission released a enforced guidelines, in December 2015, to prevent gender identity discrimination. The guidelines protect transgender residents’ right to access restrooms according to their gender. Businesses and employers that prevent transgender individuals from using the facility of their choice can face civil penalties up to $125,000 for violations and up to $250,000 for willful misconduct.

The campaign comes in response to the multiple complaints from transgender individuals over harassment and denial of access to public restrooms. “Bathroom discrimination is a regular occurrence for the transgender community,” Alisha King, a New Yorker featured in the ads stated. “So much so that many of us avoid even using public restrooms to begin with. I sincerely hope these ads help people understand that transgender people are just people just like you.”