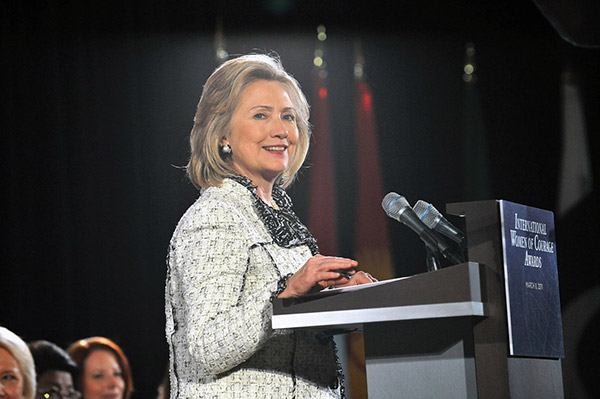 In a historic first, the National Gay & Lesbian Chamber of Commerce has issued its first political endorsement, throwing its support behind Democratic presidential nominee Hillary Clinton.
“The National Gay & Lesbian Chamber of Commerce has never endorsed a candidate in its nearly 15-year history, but the stakes have never been so high for the future of the LGBT business community,” NGLCC co-founder and CEO Chance Mitchell said in a statement. “Hillary Clinton is the progressive champion our businesses and our families need to thrive.”
NGLCC cited Clinton’s support for nondiscrimination legislation, her commitment to “cutting red tape and unnecessary tax burdens on small businesses,” and her promise to expand on President Obama’s executive actions ensuring LGBT equality as the reasons why it decided to support her.
“The NGLCC and our partners are proud to endorse a champion for equality and opportunity who will promote the Democratic Party’s most progressive platform yet,” Mitchell added. “Secretary Clinton proudly affirms an essential core value of the NGLCC: that we are all stronger together, and that our economy only succeeds when the American Dream is available to all LGBT and allied Americans.”
Clinton issued her own statement thanking the organization for their endorsement, saying she was “honored” to receive it. She also promised to push for passage of the Equality Act, which would prohibit discrimination against LGBT people, and touted her plans to make it easier for small businesses to start up.
“The stakes in this election could not be higher for LGBT Americans,” Clinton said. “When Donald Trump says he’ll ‘make America great again,’ that’s code for ‘take America backwards.’ He has said he would appoint judges who would overturn marriage equality. The man Trump chose as his running mate signed a law that opened the door for Indiana businesses to discriminate against LGBT people and said marriage equality could cause ‘societal collapse.’ As we’ve seen in North Carolina, discrimination isn’t only wrong — it’s bad for business.  North Carolina’s egregious HB 2 measure has caused companies to pull jobs and millions of dollars out of the state.
“In America, if you can dream it, you should be able to build it — no matter where you come from, what you look like, or who you love.”
Business Backlash: Corporate America is leading the fight against anti-LGBT laws[/crosslink]
[ninja-inline id=73197]

John Riley is the local news reporter for Metro Weekly. He can be reached at jriley@metroweekly.com
← Previous Story Trump campaign CEO under scrutiny for comment about “dykes”
Next Story → Anti-gay activist writing God-centric government textbooks for public schools