By John Riley on October 29, 2016 @JohnAndresRiley 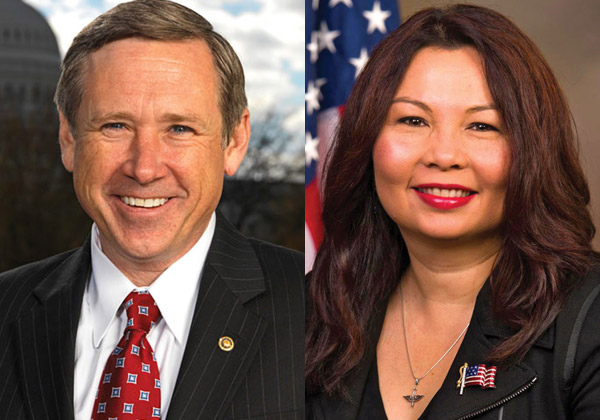 The Human Rights Campaign’s (HRC) board of directors has withdrawn its endorsement of one of the few pro-LGBT Republicans in the U.S. Senate after he made a disparaging remark about his opponent’s mixed racial heritage.

U.S. Sen. Mark Kirk (R-Ill.) has long been considered the most vulnerable Republican Senate incumbent, as he represents a Democratic state and is up for re-election in a presidential year, when more Democratic-leaning voters tend to show up at the polls. Kirk is being challenged by U.S. Rep. Tammy Duckworth, an Iraq war veteran who lost both her legs in combat. Most public polls have shown Duckworth in a strong position to defeat Kirk.

In a debate on Thursday night, Duckworth was speaking about the sacrifices that military members make for their country in times of war, saying: “My family has served this nation in uniform, going back to the Revolution. I’m a daughter of the American Revolution. I’ve bled for this nation. But I still want to be there in the Senate when the drums of war sound. Families like mine are the ones that bleed first. But let’s make sure the American people understand what we are engaging in, and let’s hold our allies accountable, because we can’t do it all.”

“I had forgotten that your parents came all the way from Thailand to serve George Washington,” Kirk quipped, while Duckworth sat stone-faced. Duckworth was born in Thailand to a mother of Chinese descent, but her father, a Vietnam War veteran, comes from a military family that can trace its lineage — and its members’ record of service — as far back as the country’s founding.

Back in January, HRC threw its support behind U.S. Sen. Mark Kirk’s (R-Ill.) re-election bid, citing his 100 percent voting record on HRC’s most recent congressional scorecard, his vote to repeal the military’s “Don’t Ask, Don’t Tell” policy, his endorsement of marriage equality, and his support for the Equality Act. But the organization’s decision to endorse Kirk over Duckworth — who also earned a 100 percent voting record on LGBT issues — raised more than a few eyebrows.

At the time, JoDee Winterhof, HRC’s senior vice president of policy and political affairs, said at the time: “We don’t win by kicking pro-equality officials out of office. Everyone knows we need 60 votes to get any bill through the Senate and that requires at least some supportive Republicans to vote with us. So when members of Congress vote the right way and stand up for equality — regardless of party — we have to stand with them or lose.”

Following the debate, both social and traditional media went wild, breathlessly covering Kirk’s racially-tinged comments. But many activists also criticized HRC for having backed Kirk in the first place.

As a black gay man, Im disgusted with @HRC for endorsing a racist bigot Mark Kirk! Racism within the LGBT is real and it's sad!

So @HRC is maintaining its endorsement of Mark Kirk over pro-gay-rights @TammyforIL even after his gross racism at the debate.

How can @ChadHGriffin and @HRC campaign to vote against Trump because he's a bigot and racist when they endorse racists like @MarkKirk? 🤔 pic.twitter.com/yw3UK2SKxa

I appreciate @MarkKirk's favorable disposition towards LGBT rights. But, I can do without friends who see some Americans as others. cc: @HRC

HRC initially refused to rescind its endorsement, telling the activist blog The New Civil Rights Movement: “Mark Kirk’s comments were wrong an inappropriate. HRC endorsed Senator Kirk based on the strength of his record on LGBTQ equality, and while that remains unchanged, we believe he should rescind his comments immediately.”

On Friday, Kirk issued a brief apology via social media, tweeting: “Sincere apologies to an American hero, Tammy Duckworth, and gratitude for her family’s service. #ilsen.”

Sincere apologies to an American hero, Tammy Duckworth, and gratitude for her family's service. #ilsen

But in a surprise move on Saturday, Human Rights Campaign President Chad Griffin posted an open letter on Medium.com announcing that the organization’s board of directors had voted to take an “unprecedented step” and revoke an endorsement for the first time in the HRC’s 36-year history.

“We are a bipartisan organization and our staff and board make endorsement decisions based on a proven record of LGBTQ equality and a candidate’s ability to drive legislative change,” Griffin wrote. “We will not continue to make progress and pass the Equality Act without Republican support.”

But Griffin pivoted, adding: “Leadership is about more than the legislation one sponsors and the votes one casts. On Thursday night, Senator Kirk’s comments about his opponent’s heritage were deeply offensive and racist. His attempt to use Congresswoman Tammy Duckworth’s race as a means to undermine her family’s American heritage and patriotism is beyond reprehensible. … The diversity of our movement is our greatest strength, and Senator Kirk’s remarks were an affront to our most fundamental values.”

Griffin acknowledged Kirk’s apology, but said it “failed to adequately address the real harm and magnitude of his words.” He also announced that the Human Rights Campaign instead would be endorsing Duckworth, and that its political action committee would be contributing the maximum amount allowed to her campaign.

John Riley is the local news reporter for Metro Weekly. He can be reached at jriley@metroweekly.com
← Previous Story Mormon Church appeals to gays who have left the faith
Next Story → Virginia newspaper trolls Pat McCrory with “endorsement” over HB 2