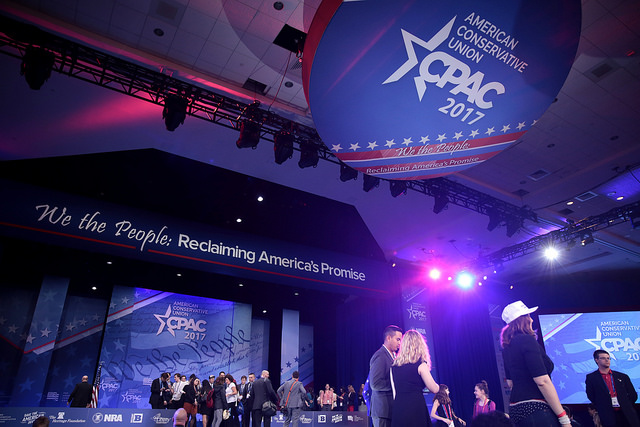 Peter Boykin, The president of Gays for Trump is attending his first ever Conservative Political Action Conference. To say he’s in his element is an understatement.

“I would much rather be here than a gay club any day, because everyone’s friendly,” he beams. “I like to have the opportunity to come out and voice my opinions. It gives me an advantage to be around people that I really feel comfortable around. All the Trump rallies I went to, I felt so much love.”

For Boykin, a 39-year-old North Carolina resident, CPAC has largely welcomed gays with open arms — something he feels contrasts with the way many LGBTQ people treat conservatives, particularly religious conservatives.

“It’s funny,” he says, “they always talk about Christians pushing away the LGBT, but it’s really the opposite. It’s the LGBT liberals pushing their conservative family members away.”

Boykin dismisses the narrative that the GOP is hostile to LGBTQ rights as “fake news,” a perception he says is fed, in part, by a lack of outreach from the GOP to the LGBTQ community.

“There’s a big social aspect to being LGBT,” he says. “The Democrats go to the Pride events. You don’t really see the GOP set up there. The GOP doesn’t really know how to approach the LGBT.”

Which is why, later this year, Boykin and other representatives from Gays for Trump plan to attend Pride celebrations throughout the United States, in order to start conversations with the community about the appeal of the Republican Party.

Boykin’s desire to bridge the gap between the GOP and the LGBTQ community mirrors a larger aspect at this year’s CPAC. Attendees stressed the importance of a “big tent” approach to building the party, which demands outreach to communities that have traditionally favored Democrats, including LGBTQ people.

Groups like Log Cabin Republicans are an important part of that process, says Martha Ruiz of Washington, D.C.

“That’s an example that shows that the Republican Party is a party of inclusion and diversity,” the 30-year-old says. “We’re not pushing them out of the party because they have another sexual preference. We all have conservative ideals, so why can’t they be part of our party?”

Charlotte Davis, the 19-year-old president of the College Republicans at the University of West Florida in Pensacola, agrees with the influence Log Cabin Republicans can have on outreach.

But Log Cabin hasn’t always enjoyed such a warm reception at CPAC. Just last year, their presence at the conservative conference made headlines. This year? Barely a ripple of controversy. In fact, Log Cabin’s booth at the CPAC “hub” — an area where various organizations promote their respective causes — was one of the most popular, particularly among the throngs of college students who attended this year’s conference.

“I’m a Christian and a social conservative. I think there’s only two genders and bathrooms should reflect that fact.” –Viraktep Ath, 23, Lake Elsinore, Calif.

“Our sponsorship of CPAC this year is a non-event, which is exactly the way I’ve always wanted it to be,” says Gregory T. Angelo, president of the Log Cabin Republicans. “The exciting thing is, much like last year, there’s been a constant stream of visitors and supporters here. Our reception has not just been overwhelmingly positive, but unanimously positive.”

For Angelo, CPAC provides the opportunity to be a strong voice for the LGBTQ community. Through conversations with conference attendees, they try to build trust with conservatives by proving that Log Cabin shares their basic values — a commitment to limited government, support for constitutional principles, an emphasis on individuals rather than identity politics, and on personal liberty instead of growing government power.

Starting those conversations is the only way to move forward on LGBTQ issues, Angelo says, particularly working directly with, appealing to, and compromising with Republicans. It’s why he believes his group is best poised to act as a conduit between the LGBTQ community and GOP lawmakers at both the state and federal levels.

“We need to meet Republicans where they are,” he says. “With Republicans controlling the White House, the Senate, the House of Representatives, the majority of governorships, the majority of State Houses, any movement in the direction of LGBT equality is going to have to address the concerns that people of goodwill have with passing LGBT nondiscrimination legislation. There has to be some détente between advocates for religious liberty and LGBT equality.”

Log Cabin and Gays for Trump may be welcome entities, but transgender issues are a pricklier topic. The GOP has in many instances spearheaded the various “bathroom bills” and other anti-transgender legislative movements that have swept the country of late. Particularly with regards transgender students accessing facilities that match their gender identity, many CPAC attendees feel those policies are best decided by state officials or local school boards, a view that’s typified modern-day conservatism.

“It should be a state’s rights issue,” says Clare McKinney, 20, of New Lenox, Ill. “I go to an all-women’s college, so it’s interesting to see the way things are shifting. Because at an all-women’s Catholic college, you’d never have thought they’d allow men to join.

“But recently, we had a survey by the president’s office, and it listed transgender as one of the gender options. So I became curious if we actually have a transgender student at the college, and it hasn’t been made known.”

Viraktep Ath, of Lake Elsinore, Calif., also supports leaving the decision up to the states.

“That’s a conservative stance,” says the 23-year-old. “But I’m a Christian and a social conservative. I think there’s only two genders and bathrooms should reflect that fact.”

Jennifer Williams, a 48-year-old transgender woman from Trenton, N.J., is committed to changing that belief. She wants to serve as an ambassador for the transgender community through her interactions with her fellow cisgender conservatives, who may be unfamiliar with the issues surrounding LGBTQ rights.

“Since transgender people, particularly, and the LGB community were on the election ballot this year, it was really a duty that I come and speak to conservatives,” she says. “And speak to them as the first transgender person they’ve ever met and de-mystify our community.

“Even though we’re Republicans, I try to follow the Harvey Milk Rule: for every person that knows you, they’re less likely to vote against you.”

On the first day of CPAC, Williams, along with fellow transgender attendee Jordan Evans, held up a Gadsden flag reading “Don’t Tread on Me,” with signs indicating they were transgender and conservative. Both women were initially nervous about making the statement. Their fears proved to be unfounded.

“You kind of come into this expecting the worse, because according to a Harris poll a few years ago, only 16 percent of all Americans had met a trans person,” says Evans, a 26-year-old elected official from Charlton, Mass. “Assuming that’s even less for people who identify as conservative, I came down here expecting I was going to have a lot of difficult conversations, things might get a little dicey, but I was wrong…. People have been absolutely wonderful. I’ve gotten a lot of questions. They’ve all been very civil. People genuinely just want to know more, and they don’t always know how to ask…. We have had a few people make a snide comment here or there, but it’s probably a super-minority.”

Looming over this year’s CPAC was a move by the Departments of Justice and Education to reverse Obama-era guidance that enabled transgender students to be treated according to their gender identity. The Trump administration has defended the move, calling the Obama guidance an “overreach” and saying decisions surrounding transgender bathroom access should be made at the state or local level.

“This year’s been so tough, and particularly with what happened Wednesday night,” says Williams, tearing up as she refers to the rescinded guidance. “There are nearly 200,000 transgender kids who found out from the federal government that you’re an other, that you’re foreign, that you’re not even part of the LGB community. It sends a signal to them that the government doesn’t have their back, isn’t looking out for them, and doesn’t want to make sure they get educated. It also sends a signal to transgender adults that, ‘All right. You’re on the plate. What are you going to do about it?'”

Evans is “devastated” about the Trump administration’s decision, though she expected it to happen, considering the political landscape and the people Trump had put in charge of the Justice and Education Departments: Attorney General Jeff Sessions and Education Secretary Betsy DeVos.

“I don’t really care for [Trump’s] argument about state’s rights when it comes to this issue, because when it comes to basic civil liberties like this, this should be an issue that the feds do have oversight on,” Evans says. “If people want to bring up the 10th Amendment issue, I just remind them that all constitutional amendments matter. There was a Glenn v. Brumby case that found we could be covered under protections of the 14th. That matters just as much as the 10th Amendment.”

While internal debates among conservatives and Republicans regarding transgender access to bathrooms are not likely to be resolved anytime soon, the mere presence and engagement of LGBTQ Republicans could pay dividends in the future. But the key to success requires keeping channels of communication open between the two sides.

“I’m of two tribes. I’m of the LGBTQ tribe, and I’m of the Republican conservative tribe,” says Williams. “I know we can talk to each other, and hopefully I’ve been a small part of proving that.”