“Midwestern Gothic” at Signature Theatre (Review): Tempts and teases, but only partly delivers

A crime, weed, and showtune-laced trip to Coen Brothers country that's not as fun or far-out as it should be

A carnival of lust, violence and lewd behavior, Josh Schmidt and Royce Vavrek’s cheeky new musical Midwestern Gothic (★★★½), now at Signature Theatre, blows in like a hot summer breeze, promising a purely escapist good time. How escapist might depend on one’s personal proximity to sensational stories of teen-aged criminal masterminds who lure unsuspecting victims into webs of deceit that result in kidnapping, murder, or any number of other felonies. As for the good time, the production tempts and teases, but only partly delivers.

It turns out she also is hatching plans to exploit Red’s lust, and a dim young beau’s thirst, in order to make her escape from these humdrum backwoods by any means necessary. And she’s even prepared to sing and dance her Roxie Hart out about it, backed by a troupe of trucker cap-wearing, flannel-clad bo-hunks. Sounds wickedly delightful, no?

Certainly Morgan Keene’s performance as Stina, the white-hot center of this pop and country music-infused musical crime story, is nothing short of captivating. Her Stina can be mean and cunning, naïve and impressionable, practicing seduction in a yellow one-piece bathing suit that might belong to her mother but properly clings to her curves. She’s not a girl, not yet a woman, just a yearning fantasist beginning to understand the power at her disposal for getting what she wants. Fiona Apple’s “Criminal” should be her theme song. It’s an apt comparison, given Stina’s bad, bad appetite for breaking boys, not to mention Keene’s pop star charisma and pleasing vibrato.

The songs, with music by Schmidt and lyrics by Vavrek and Schmidt, work best when projecting Stina’s dreamy, ruthlessly self-centered point of view. Keene attacks the mostly piano-driven tunes with a suppleness and range that might inspire further comparisons to ladies named Tori or Joni, but sound beautifully all her own. Though Vavrek’s book renders her as a fairly predictable murderous Lolita, in Keene’s hands Stina is eminently watchable.

Director-choreographer Matthew Gardiner ensures all eyes stay on her, with his persuasive vision for staging Stina’s flights of fancy, whether she’s headlining a number in her salacious imagination, or leading a sinister hymn for salvation. Lighting, costumes and choreography blend well to assist in drawing focus to the sharpest emotions in her journey. Unfortunately, the vision blurs when directed towards the story and characters beyond Stina and her machinations.

That story takes its sweet time evolving past introductions, with the show a half a dozen songs in before the plot gets rolling. Horrifying news stories play out none too rarely of diabolical high schoolers and middle schoolers who cajole or bully rivals into deadly, carefully laid traps, but the writers don’t seem to have a clear idea of what Stina’s plans or end goals are for herself, Red, Deb, or her pliable groupie of a classmate, Anderson (Sam Ludwig).

Likewise, not everyone in the cast has the same firm grip on their character demonstrated by Keene, or by Rachel Zampelli as sloppy barfly LuAnn, or by Bobby Smith, wryly funny as Deputy Dwayne, probably the sharpest tool of the show’s unwitting male characters. Deb, the mother monster, as it were, of this Gothic horror, should be as indomitable a force as her daughter, or reveal the vestiges of such a formidable nature. But Midwestern Gothic misses the opportunity to stage a truly epic battle of wills between these two fiercely self-preserving creatures. Instead, Edelen’s performance lands nearer to ordinary fun-time roadhouse hostess, with only bare hints of the deeper hardness that governs how Deb chooses her priorities.

Timothy J. Alex is compelling as Red, and has a way with a sardonic punchline, although his character too is so passive that he doesn’t ultimately pose the challenge that Stina, Deb or the show demand. He’s no match for the little girl, especially as she’s supported by her chorus line of he-men, who don’t always achieve a uniformly robust sound, though they look the part of a small town girl’s macho line-dancing fantasy, and add nice backing harmonies.

The chorus also contributes fabulous lifts and formations to the show’s references to other musicals. Presumably, Stina’s so-called “Hired Boys” fit somewhere into Midwestern Gothic‘s larger intended statement about the broken dreams and lives of the rural white working class, the most buzzed-about demographic of the last twelve months. What exactly that statement might be gets lost in a bloody, muddled climax, despite the radiant light cast from within the center of this violent storm. 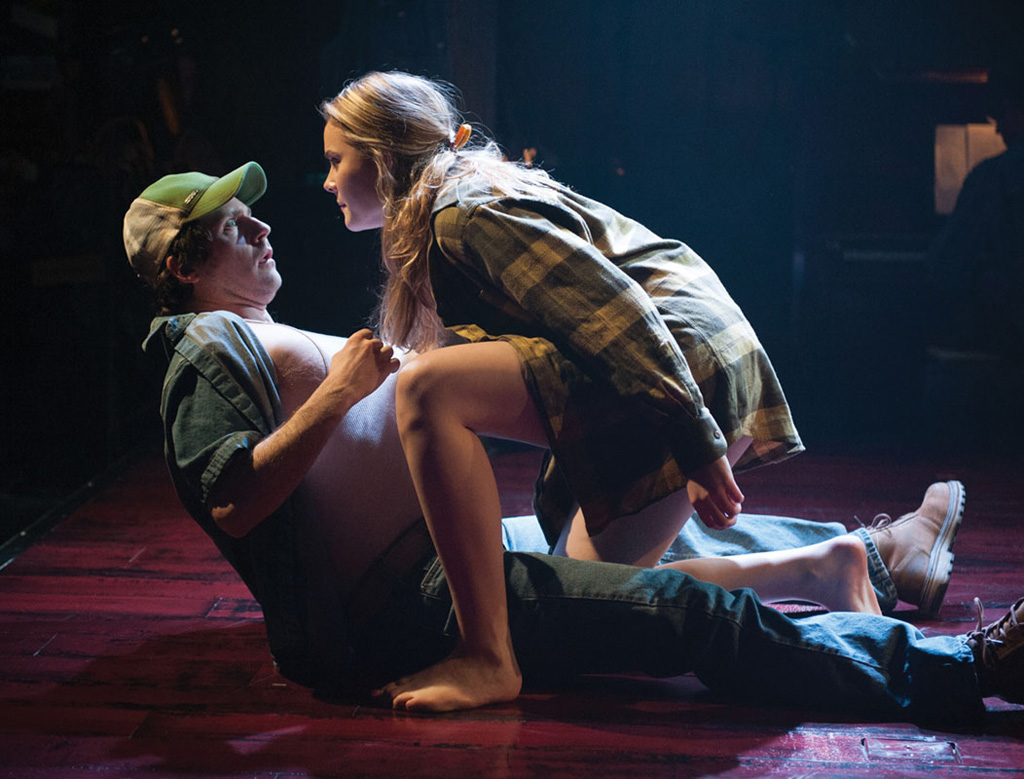