NCAA gets duped: North Carolina eligible for championships after fake “repeal” of HB 2 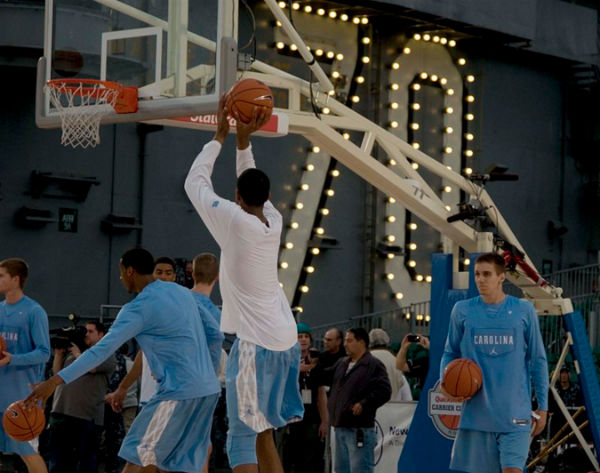 The NCAA backed down from its previously strong stance opposing anti-LGBTQ discrimination, issuing a statement that reversed its removal of 2017-2018 sports championships from the state while attempting to paint itself as a defender of equal rights.

Previously, the NCAA had essentially blacklisted North Carolina through 2022 as a potential host site for championships because of HB 2, a law that restricted transgender bathroom access and overturned local nondiscrimination ordinances that extended protections to the LGBTQ community. Desperate to regain college sporting championships, General Assembly lawmakers in North Carolina proposed a “compromise” whereby HB 2 would be officially “repealed” but its most controversial anti-LGBTQ provisions would stay in place.

According to a press release, the NCAA Board of Governors “reluctantly” voted to allow North Carolina cities to be considered as host sites for future sports championships from the fall of 2018 through the spring of 2022. The NCAA has not yet made a final decision on which cities will be chosen for host sites for those years. The Board also voted to re-award championships that had previously been scheduled to be held in North Carolina during the 2017-2018 school year to the state, but added a requirement that cities in North Carolina — or elsewhere — must continue to submit additional documentation demonstrating how student-athletes and fans will be protected from discrimination while staying in host cities.

The NCAA said in the press release that the “repeal” of HB 2 “has minimally achieved a situation where we believe NCAA championships may be conducted in a nondiscriminatory environment.” But the organization also reserved the right to yank championships from any future site that has local or state laws that are believed to be hostile to the LGBTQ community.

“While the new law meets minimal NCAA requirements, the board remains concerned that some may perceive North Carolina’s moratorium against affording opportunities for communities to extend civil rights as a signal that discriminatory behavior is permitted and acceptable, which is inconsistent with the NCAA bylaws,” the press release reads.

“However, we recognize the quality championships hosted by the people of North Carolina in years before HB 2. And this new law restores the state to that legal landscape: a landscape similar to other jurisdictions presently hosting NCAA championships.”  That last sentence may be a reference to states like Texas, which will play host twice to the NCAA Men’s Basketball championships in 2018, with the opening rounds being played at Dallas’ American Airlines Center and the final four being played at San Antonio’s Alamodome.

However, it should also be noted that Texas is currently considering a bill, SB 6, that is almost identical to HB 2 in the restrictions it places on transgender people accessing public restrooms and changing facilities, and on localities, by preventing them from passing or enforcing LGBT-inclusive laws. According to the NCAA’s latest position, that should mean that, should SB 6 pass, the organization will take action to remove championships from the Lone Star State.

Under the so-called “repeal” approved by North Carolina lawmakers, all localities are prohibited from passing any ordinance relating to employment or non-restrooms public accommodations until Dec. 1, 2020. The repeal also prohibits any state or state-affiliated entity from passing laws governing restroom usage, meaning such laws or regulations cannot explicitly permit transgender people to use facilities matching their gender identity. This “compromise” leaves many questions about how and whether restrooms will be policed or how law enforcement will respond to complaints if a transgender person does use the restroom matching their gender identity.

“We have been assured by the state that this new law allows the NCAA to enact its inclusive policies by contract with communities, universities, arenas, hotels, and other service providers that are doing business with us, our students, other participants, and fans,” the NCAA said in its statement. “Further, outside of bathroom facilities, the new law allows our campuses to maintain their own policies against discrimination, including protecting LGBTQ rights, and allows cities’ existing nondiscrimination ordinances, including LGBTQ protections, to remain effective.”

LGBTQ groups that were enraged at North Carolina lawmakers’ decision to approve the “repeal” bill didn’t hold back, venting their anger at the NCAA for its reversal of position and acquiescence to allowing discrimination.

“The NCAA’s decision to backtrack on their vow to protect LGBTQ players, employees and fans is deeply disappointing and puts people at risk,” Chad Griffin, president of the Human Rights Campaign, said in a statement. “After drawing a line in the sand and calling for repeal of HB 2, the NCAA simply let North Carolina lawmakers off the hook.”

“It is disappointing to see the NCAA backpedal after it stood strong against the deeply discriminatory HB 2,” added Chris Sgro, the executive director of Equality NC. “HB 142 continues the same discriminatory scheme put forward by HB 2 and does little to protect the NCAA’s players, employees, and fans. The NCAA’s decision has put a seal of approval on state-sanctioned discrimination.”

John Riley is the local news reporter for Metro Weekly. He can be reached at jriley@metroweekly.com
← Previous Story Tennessee anti-gay marriage and bathroom bills dead until next year
Next Story → 5th Circuit hears challenge to Mississippi “religious freedom” law