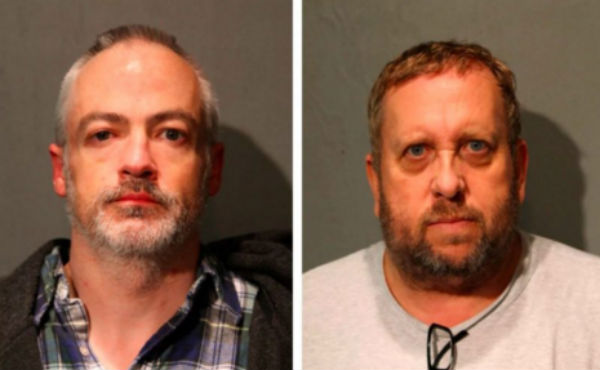 A Northwestern University professor allegedly enlisted the help of a man he met in an online chatroom to carry out the brutal murder of his boyfriend as part of a sexualized murder-suicide fantasy, reports DNAInfo.

Wyndam Lathem, a published microbiologist and professor, and Andrew Warren, a senior treasury assistant at Oxford University in Great Britain, are accused of plotting to murder Lathem’s boyfriend, Trenton Cornell-Duranleau and stabbing him more than 70 times while he was sleeping on July 27.

During the attack, Cornell-Duranleau woke up and began struggling, prompting the men to keep stabbing him.

Prosecutors say he asked Lathem what he was doing before succumbing to his injuries, which left him nearly decapitated and left on the floor of Lathem’s Chicago apartment in his underwear.

Prosecutors also say there was almost another victim, but that person may not have showed up, thereby sparing their life.

Assistant State’s Attorney Natosha Toller alleges that Lathem and Warren hatched the murder plot as part of a sexual fantasy they’d talked about. According to Toller, the fantasy involved killing someone, and then, later, killing each other, with Lathem stabbing Warren to death while Warren shot him.

Lathem paid for Warren to fly to Chicago and put him up in a hotel before luring Cornell-Duranleau to his apartment. After his boyfriend fell asleep, Lathem texted Warren and told him to come over, where they set upon Cornell-Duranleau, stabbing him with multiple knives and hitting him with a lamp while Warren recorded the murder on a cell phone.

After the murder, prosecutors say the two assailants went to the bathroom to shower and clean the blood off of themselves. They attempted to clean the apartment and then fled across the country in a rental car.

They made two donations in Cornell-Duranleau’s name to a health center and to the Geneva public library. At the library, Lathem called his doorman anonymously and said there had been a crime in his apartment. When police arrived on scene, they found Cornell-Duranleau’s body.

Lathem and Warren were the subjects of a national manhunt during their cross-country road trip. They later contacted an attorney and negotiated with police to turn themselves in. Lathem also reportedly sent a video message to his parents and friends admitting to the murder. After turning themselves over to police in California, Lathem and Warren were extradited to Chicago and charged with first-degree murder.

Lathem was subsequently fired from Northwestern after the allegations against him came to light. Both he and Warren are being held without bail as they await trial.

An attorney for Lathem asked the public not to rush to judge his client during a news conference on Sunday following his client’s bail hearing.

John Riley is the local news reporter for Metro Weekly. He can be reached at jriley@metroweekly.com
← Previous Story Report: White House preparing to tell Pentagon to ban transgender military service
Next Story → Talk show guest who killed gay man with crush on him released from jail