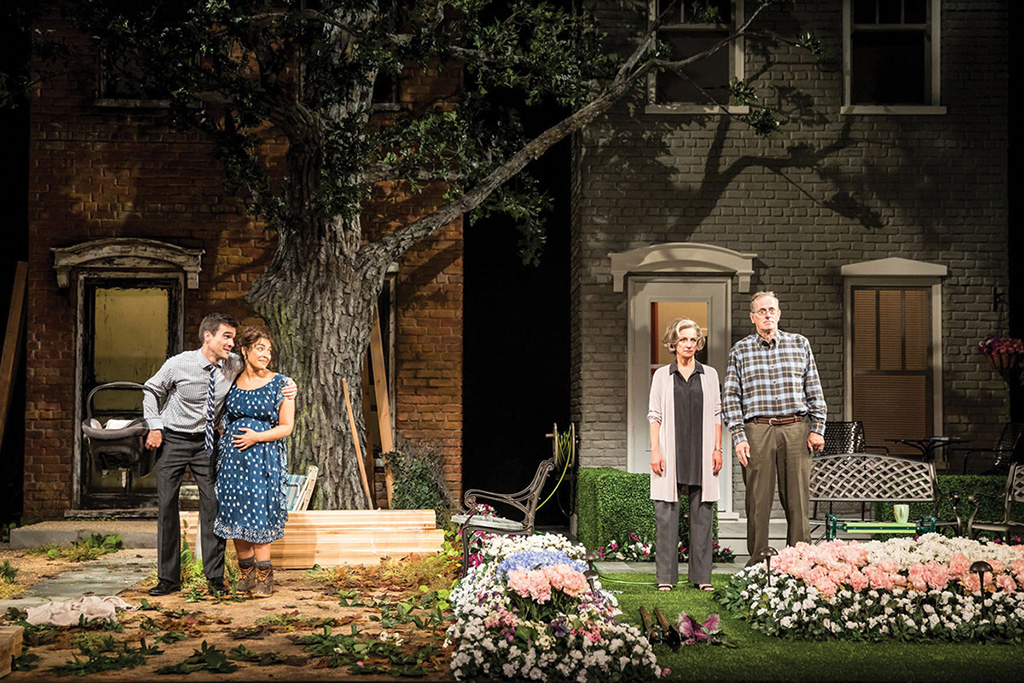 Is there room for another play about race, class and that clever twist that everyone is in some kind of glass house? In the case of Karen Zacarias’ Native Gardens (), it’s a yes. First, because it’s not often that D.C. audiences get to be teased about their iconic residential neighborhoods. Second, and more importantly, because the play is just so darn cute.

In an age in which theater is bravely tackling subjects ripped from disturbing headlines and a most unsettled zeitgeist, there is something positively cozy about a play that loves its characters, makes its point with lots of laughs, and then goes charmingly home. Thumbing her nose at sanctimony, Zacarias asks: who says we have to feel gutted after a discussion of race, class and ethnicity?

As we meet the characters, the very pregnant young Latino couple Tania and Pablo Del Valle, who have bought the fixer-upper, and the older white couple Frank and Virginia Butley, who are the longtime residents next door, it seems at first as if there is enough goodwill to overcome their differences. If old-fashioned Roundup-loving gardener Frank doesn’t get Tania’s plan to create a “native” garden full of endemic species, he can pretend to tolerate it. And if Virginia thinks her working class girl-made-good story is relatable to Pablo’s struggle to make partner at an all-white law firm, he can smile and nod. 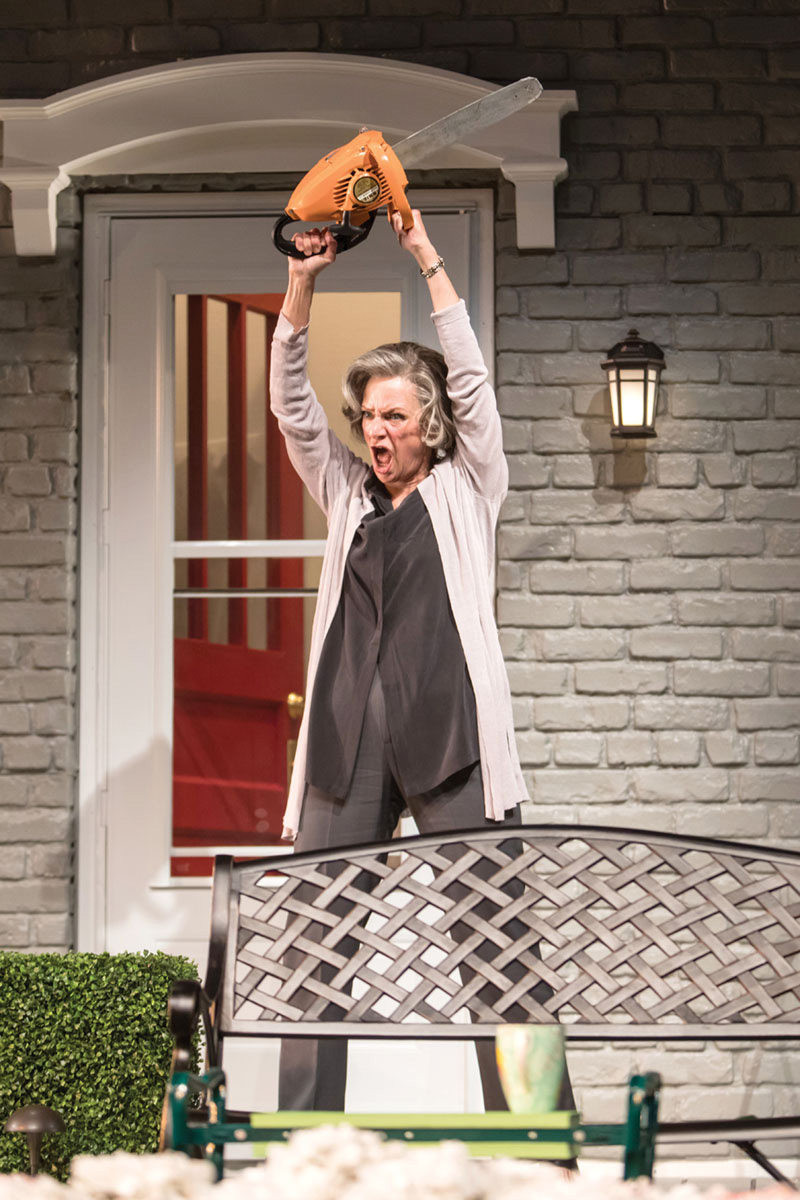 But Zacarias didn’t throw these two couples together just to have them chat over a bottle of wine of an evening.

The fun starts when Pablo impulsively invites his entire law firm over for a barbecue and the couple begin a frantic attempt to sort out their unkempt back garden. Without giving anything away, suffice to say all does not go well. Before long, a tiff with the Butleys goes nuclear and the couples are lobbing insults and accusations with Wimbledon-like precision. But if the aim is accurate, true to the genre, nobody gets away with being too holier-than-thou and everybody gets an eye-opener into how the other half lives. Because Zacarias is all about the laughs, the “teachable” moments are tolerable and everything else is just a whole lot of fun. Even better, if there are few metaphorically scraped knees, nobody gets irredeemably hurt. It’s a nice change from gritty reality — on stage or on the streets.

Giving wonderful voice to Zacarias is spot-on director Blake Robison helming a super cast, all attractively paired and full of just the right kind of frisson. Capturing the fragility of the Establishment male long retired from power, Steve Hendrickson gives Frank Butley the exact right mix of superior and absurd. As his deadly competent wife Virginia, Sally Wingert is utterly believable as the dry Washington professional “at home” and in her managing of the comically histrionic Frank. On the other side of the fence, Dan Domingues is charm personified as Pablo Del Valle, delivering a wonderfully subtle performance along with some superb comic timing. As his passionate wife Tania, Jacqueline Correa does a great job within the challenges of the role. Tania is Zacarias’ speech-giver — be it on the importance of native gardens or the trials of being a person of color. Of all of the characters, she is the one in greatest danger of becoming tiresome. But Correa keeps it on the right side of annoying by embracing the texture in this woman: she is nobody’s fool but she wants peace. She is educated and middle-class, but she won’t forget her roots.

Rounding out the ensemble with some priceless moments any homeowner can relate to are Oscar Ceville, Javier Del Pilar, Guadalupe Campos and Christopher Rios (who delivers volumes in a single nod).

If Gardens isn’t out to rock the politically-correct world, it certainly jostles it with a belly laugh. 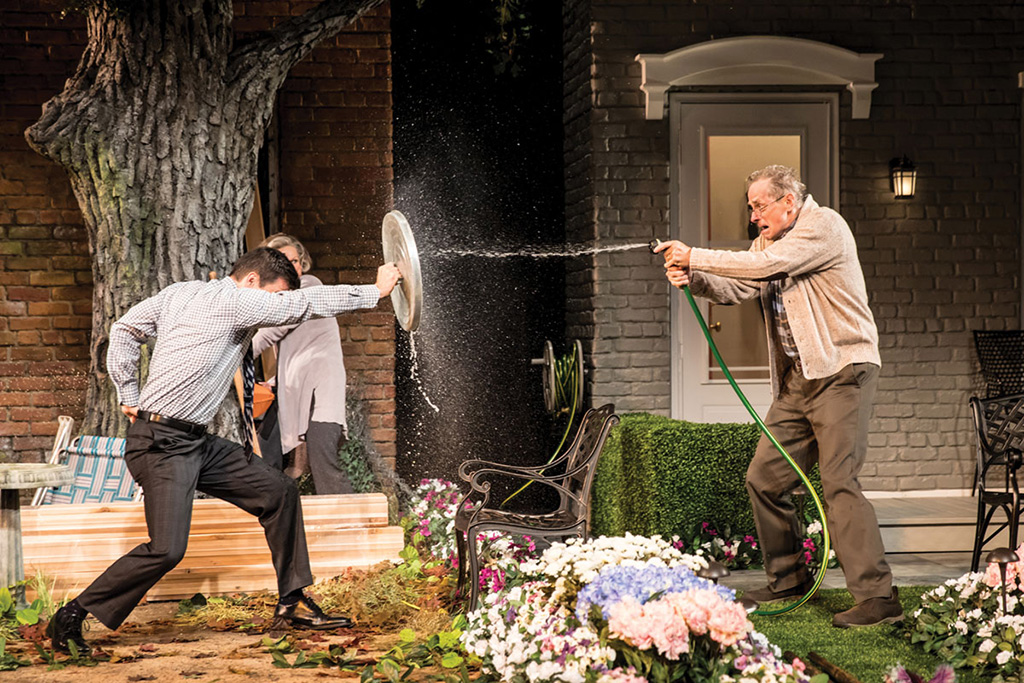