Home / Arts + Entertainment / Stage / Review: “The Way of the World” at Folger Theatre

Review: “The Way of the World” at Folger Theatre

Theresa Rebeck's "The Way of the World" has a few moments of brilliance, but not enough to redeem it

Sometimes it just doesn’t come together. Theresa Rebeck’s adaptation and direction of William Congreve’s The Way of the World (★★) has all the right ingredients: a fun concept, cleverly updated language, a few irreverent references, and an energetic ensemble. But with an entertaining first act and a tiresome second, the whole thing is a bit too much like a full-of-themselves party guest who just won’t leave.

It’s a problem of balance. Taking its cues (if not much language) from the eighteenth century comedy of manners, Rebeck’s reboot asks whether true love can exist when there’s a fortune at stake. The play is less an answer and more an excuse to lift a glittery rock and have a good look at the creepie-crawlies underneath, along with all their snarks and vulnerabilities. If turning Congreve’s toffs into air-kissing Hamptonites is fun and looks great against Alexander Dodge’s elegant confection of a set, two-plus hours of it is going to need a certain kind of fuel. Think the wild updates of David Ives, in which he delivers a steady stream of wit (by turns caustic and playful) amid meadows of joyous irreverence. Here, unfortunately, once the novelty wears off, so does the frivolous edge, and all that’s left is a collection of fairly unlikable characters working their angst in a bubble it’s very hard to care about.

Of course, humor is subjective, and some will find Rebeck’s ongoing rumble of one-liners and her (and her actors’) choices for the physical comedy funny enough. But for those that still hold the iconic British series Blackadder as the gold standard for silly-but-clever wit, this really won’t move the needle more than a handful of times.

It’s not just about the humor, it’s some of the directorial choices. Front and center — literally — is putting the young female lead Mae into a costume that looks like something the Three Stooges might deliver. With the front of her maxi-dress cut shorter than a mini, the Abercrombie-worthy Eliza Huberth’s bare legs-up-to-her-neck look is seriously distracting. Mae might complain about it, but what’s the meta-message here? She’s an uber-sexy victim of her class culture? Or is this for our delectation? Both are unlikable, and it seems an odd way to treat one’s heroine.

It doesn’t stop there. Showcasing Huberth’s overall physical perfection so garishly also sits in unpleasant juxtaposition with the raft of insecurities plaguing the other female lead, Mae’s aunt, Rene.

A woman “of a certain age,” Rene lives with Mae in loco parentis. Filling her idle-rich days alternately bedding younger men and complaining she feels old and overweight, this is a buffa role: meant to be hilariously funny with a touch of comeuppance and a hint of pathos. But if Kristine Nielsen gives it her all — writ a tad too large and loud for such an intimate space — the effect is hugely dampened by the glaring emphasis on Mae’s fruitiness. Case in point is her arrival just in time to witness one of Rene’s potential toy-boys fleeing the boudoir. As her aunt bemoans her loss, Mae is put on the bed to squirm around in pretend misery about her own problems. It’s a fiction-breaking display that diminishes everything, including Nielsen’s expertly crafted comedy and pathos. It’s a choice devoid of the wit this play deserves.

Indeed, whether we are supposed to like Mae or see her as a ninny remains a mystery throughout. The overall effect is of a conceited young woman used to being the prettiest and the richest in the room, and trying to figure out if she is worth rooting for gets old. In fact, the scene in which she finally decides to forgive the errant Henry is so self-satisfied, heavy-handed and unfunny, it could bring on a case of hives. If all this is intended, then, quite frankly, who cares if she finds true love? And, if it isn’t, then between Rebeck and Huberth, the mark is well missed.

As Henry, the penniless hunk who may or may not have a heart of gold, Luigi Sottile is another tremendous specimen. But even with the odd shirtless moment, his body never feels as vulnerably or gratuitously displayed as Huberth’s and this adds to the imbalance here. Sottile has a Shakespearean delivery that suggests potential even if it seems a little stiff in this context. But the biggest problem here is his chemistry with Mae — there just isn’t any. It is partly Huberth’s aura of conceitedness, but it’s also that Sottile keeps this man quite closed, despite his charismatic presence. He almost never smiles, laughs or even smirks. Such are the glimpses of a soul’s warm that make for a romantic lead.

Like a pair of mean-spirited bookends, frenemies Charles, Henry’s gay friend, and Katrina, Mae’s gal pal, round out the clique. Playing Charles without any redeeming qualities, Brandon Espinoza is nuanced where it counts and has good comic timing. As Katrina, Erica Dorfler is more intimidating than funny, though she delivers Rebeck’s language with true fluency. As Lyle, the out-of-towner roped into the machinations, Daniel Morgan Shelley fits the bill and offers an understated presence. In another of Rebeck’s reworks, a waitress who periodically gushes in monologue, Ashley Austin Morris does her best with a thin, weakly-humored role. Indeed, the only genuinely funny performance here comes from Elan Zafir as the “dude,” Reg. Zafir is an excellent physical comic, his timing is superb, and he absolutely nails it. Quite honestly, he makes the night.

It feels as bitchy as one of its characters to say it, but The Way of the World just isn’t all that.

The Way of the World at Folger Theatre 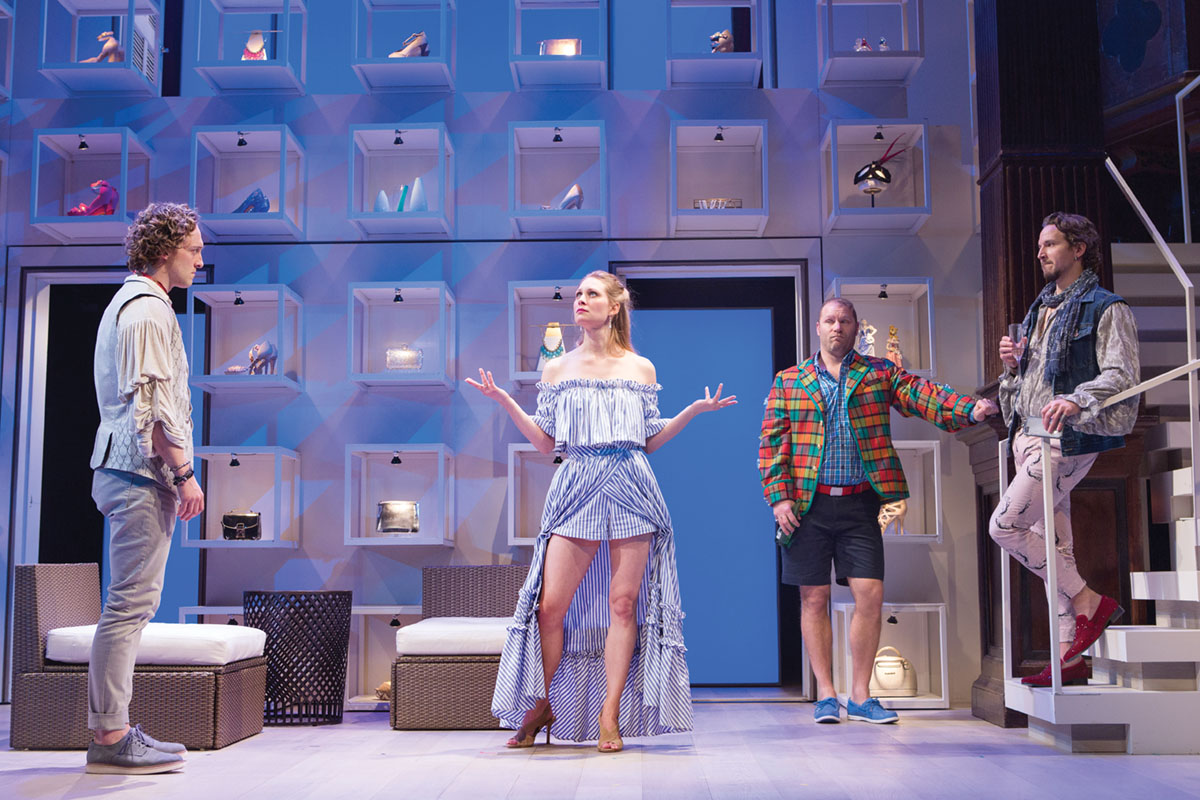 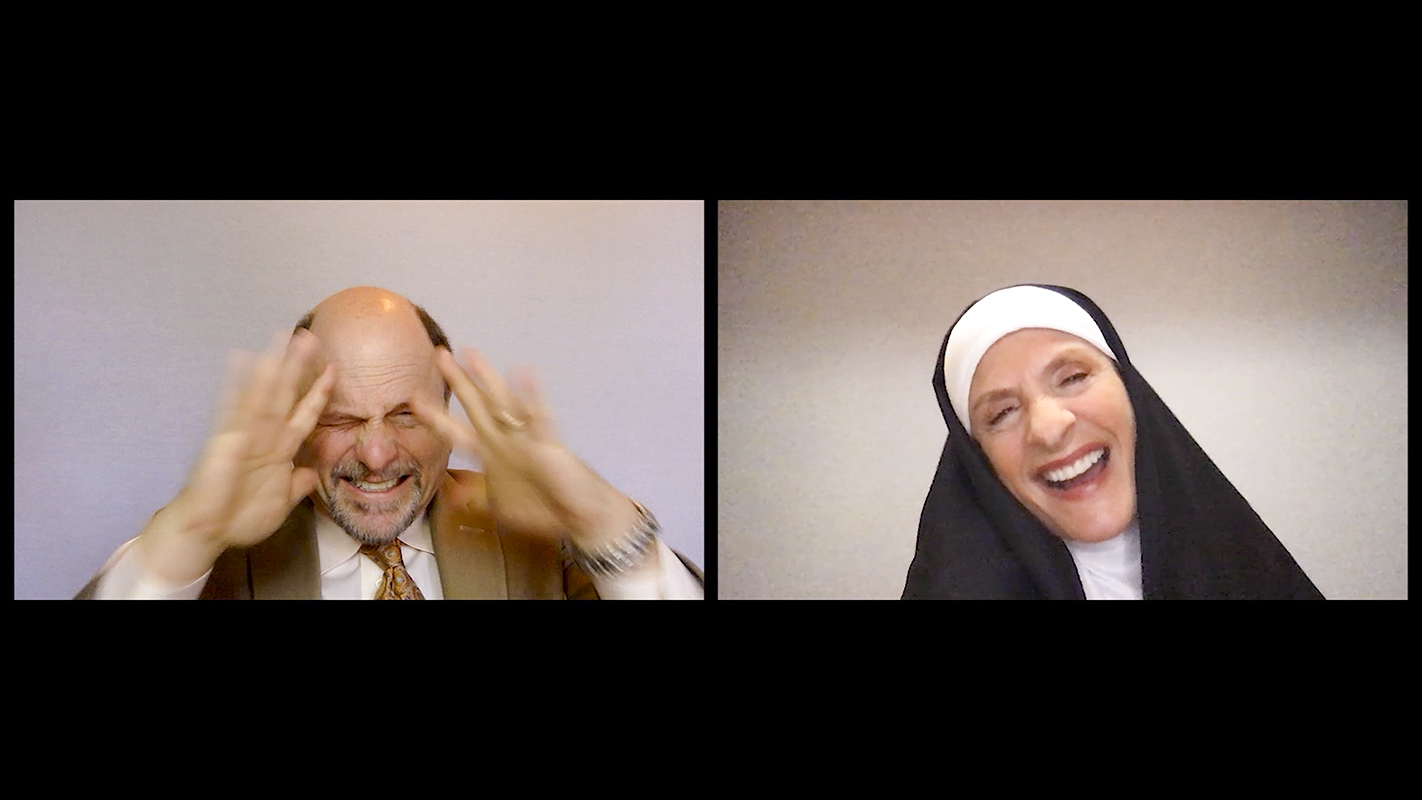 Mandy Patinkin and Bernadette Peters have been added as special guests while Christine Baranski, who starred in the original Off Broadway production of Sunday in the Park with George, will moderate an event billed as an intimate digital conversation between the two living theater legends and creative partners who were also behind Into the Woods and Passion. The focus will be on the period in time when Sondheim had vowed he was done with musicals altogether after his decade-long run of Tony-winning shows (Company, Sweeney Todd) ended in 1981 with Merrily We Roll Along, a notable flop.