By John Riley on February 16, 2018 @JohnAndresRiley 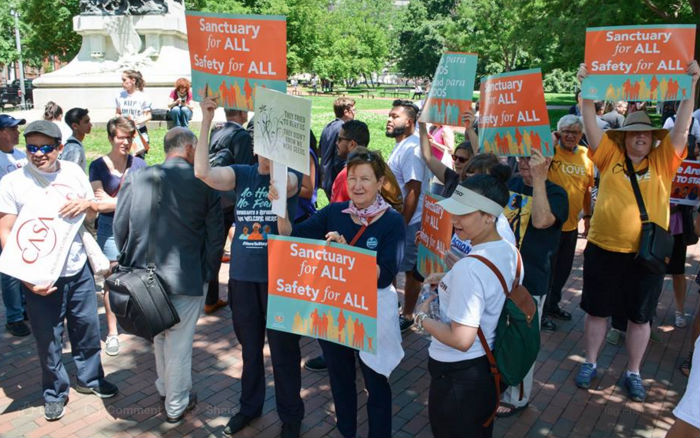 A coalition of pro-LGBTQ groups has filed an amicus brief in support of a case challenging an executive order by President Trump that seeks to withhold federal funding from so-called “sanctuary cities.”

The brief, filed with the 9th U.S. Circuit Court of Appeals, hopes to urge the judges to uphold a lower court ruling by District Judge William Orrick last November.

In that ruling, Orrick declared the president’s executive order unconstitutional, noting that the order violates the separation of powers doctrine, as well as the Fifth and Tenth Amendments of the U.S. Constitution.

“The Constitution vests the spending powers in Congress, not the President, so the Executive Order cannot constitutionally place new conditions on federal funds,” Orrick wrote at the time. “Further, the Tenth Amendment requires that conditions on federal funds be unambiguous and timely made; that they bear some relation to the funds at issue; and that they not be unduly coercive. Federal funding that bears no meaningful relationship to immigration enforcement cannot be threatened merely because a jurisdiction chooses an immigration enforcement strategy of which the President disapproves.”

The National Center for Lesbian Rights, Transgender Law Center, Centro Legal de La Raza and EL/La Para Translatinas, all of which work on behalf of LGBTQ immigrants, including asylum seekers and victims of trafficking, have thrown their support behind the city and county of San Francisco and California’s Santa Clara County, whose officials sued after Trump issued the order to deny funding to cities that refused to cooperate with federal immigration officials in rounding up and deporting undocumented immigrants.

The LGBTQ advocates argue — as do many immigration reform supporters — that sanctuary policies ensure that all community members, especially those most vulnerable to exploitation or abuse, can report crimes or discrimination, and access essential services, regardless of their immigration status.

Without the policies in place, they argue, crime victims or witnesses may be less willing to come forward and assist police in apprehending criminals. Such a system, they say, would threaten public safety by creating a permanent underclass of people who become prime targets for criminals because of their fears that law enforcement will be acting as ICE agents instead of focusing on the crimes at hand.

“If the district court’s order is not affirmed — and if the Executive Order is therefore implemented — the Executive Order will irreparably injure San Francisco and Santa Clara, undermining their efforts to keep their residents safe and healthy and to combat invidious discrimination and other forms of abuse,” the amici write in the brief.

They also detail the types of harms that could befall sanctuary cities and immigrant communities, including LGBTQ immigrants, including threats to public safety, public health, and the ability to combat discrimination or other forms of abuse — all of which, advocates argue, constitute compelling government interests.

The brief also includes personal stories to help reinforce their arguments, including that of Guatemalan immigrant Danny Sigui, who witnessed and reported a murder in Rhode Island. After Sigui testified, state officials reported Sigui’s status to federal authorities, and he was subsequently deported. Afterwards, Sigui stated: “[I]f I had known they would take my liberty, that they would take my children away from me, that they would put me [in immigration detention], I would [not have reported the crime or testified at the killer’s trial].”

“Trump’s attack on communities like San Francisco and Santa Clara prioritizes dangerous and discriminatory immigration policies over public safety,” NCLR Senior Staff Attorney Amy Whelan said in a statement. “At NCLE, we’ve worked with client victims of severe domestic violence or rape, who because of sanctuary policies, felt safe calling the police and seeking the medical care and help they needed. When communities trust each other and can work together, everyone is safer.”