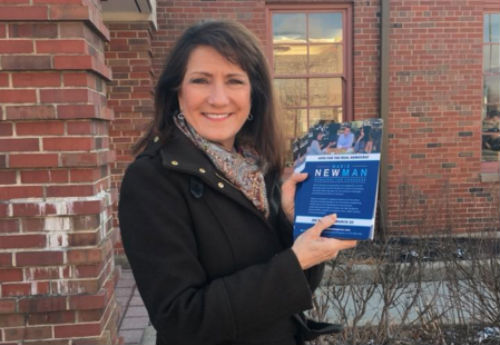 LPAC, the country’s only lesbian political action committee, has endorsed a straight woman from Illinois for a seat in Congress.

LPAC has thrown its support behind Marie Newman, a La Grange resident and mother of two who has been married to her husband, Jim, for 21 years, in her bid to unseat U.S. Rep. Dan Lipinski in the Democratic primary for Illinois’ 3rd Congressional District. The primary will take place next Tuesday, on Mar. 20.

During his nearly 14 years in Congress, Lipinski has amassed a record that is mixed, but not particularly favorable, when it comes to LGBTQ rights. While he voted to repeal the military’s “Don’t Ask, Don’t Tell” policy banning LGB soldiers from serving openly, and voted to add LGBTQ people to a list of protected classes under the nation’s hate crime laws, he has consistently opposed marriage equality and voted against bills to provide nondiscrimination protections to the LGB and LGBTQ communities.

The PAC said it was endorsing Newman because of her more liberal stances on issues, including, but not limited to, LGBTQ rights, gun reform measures, abortion rights, and immigration.

“Marie Newman’s true progressive values make her a clear choice in this race,” Ana Cruz, an LPAC boar member, said in a statement. “Newman is in a race against an anti-choice, anti-LGBT, anti-immigrant opponent in the primary and it’s time District 3 has a progressive Democrat who values and represents a diverse constituency and an inclusive legislative agenda.”

The district which includes several suburbs in southwestern Cook County, and takes in predominantly Irish and Latino neighborhoods on the South Side of Chicago, has long been in Democratic hands, and is considered a “safe” seat for Democrats. But it was one of several Democratic-held districts that, while voting for Hillary Clinton overall, shifted towards Trump, due in part to the president’s strong showing among blue-collar white voters and Catholics.

Newman, who founded a nonprofit group to address school bullying, has worked closely with state and federal legislators to draft model anti-bullying legislation, and has led a coalition of more than 70 nonprofits focusing on the issue. She has been also endorsed by women’s groups, progressive and labor groups, the Human Rights Campaign, and, most notably, U.S. Reps. Luis Gutierrez (D-Ill.) and Jan Schakowsky (D-Ill.), who represent districts that either border or are geographically close to Lipinski’s district.

“Marie Newman is on target on every progressive issue LPAC cares about — she is exactly the kind of candidate we need in 2018 and will provide much-needed progressive leadership in Congress,” Urvashi Vaid, the interim executive director of LPAC, said in a statement. “Core issues from gun control to health care and civil rights will be front and center in the new Congress and it is time to get the country back on track.”

John Riley is the local news reporter for Metro Weekly. He can be reached at jriley@metroweekly.com
← Previous Story VIDEOS: HRC ad campaign aims to foster tolerance of LGBTQ Southerners
Next Story → Texas settles lawsuit with transgender inmate who was raped and beaten in prison