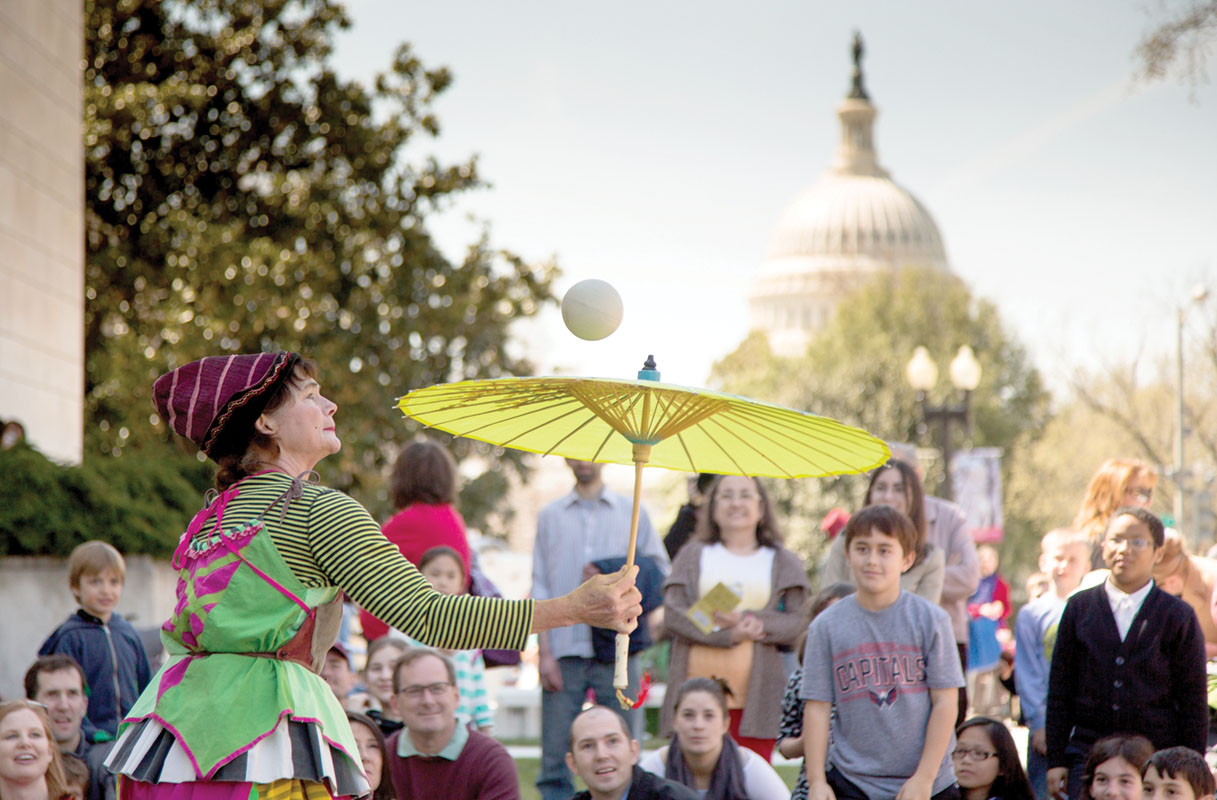 It’s the bard’s birthday, and The Folger Shakespeare Library is celebrating in proportions best described as Shakespearean.

“You could learn to fight like Hamlet, dance like Romeo, eat some empanadas or some BBQ, [then] take a garden or a paintings tour,” says The Folger’s Garland Scott, touting the venue’s annual toast to its British namesake on Sunday, April 22. You could even hit the stage for “spontaneous Shakespeare” recitations.

“I’ve seen people come in with dog-eared copies of their favorite play,” she says. “I think the opportunity to speak Shakespeare from the Folger stage is a powerful one that means a lot to people.”

That’s true of the Open House Celebration overall, now in its 39th year. The multicultural, multi-generational event even spills outside the building’s doors and onto the front lawn, where veteran stage and fight choreographer Casey Kaleba and his colleagues offer crowd-pleasing sword-fighting demos. The day ends in a reception with cake — albeit adapted for the modern palate. “We can’t get anyone to eat fruit cake,” Scott says, as her colleague Beth Emelson notes Folger’s version is “good-ole American vanilla cake with custard filling and vanilla icing.”

The cake will be served by docent Penelope Rahming, outfitted as Queen Elizabeth. “She’s been the queen here for twenty-plus years, and she hasn’t aged a bit,” Scott says. “She is actually from England, so she talks with the pedigree. She’s very posh.”

A day after the Open House, the Folger presents the annual Shakespeare’s Birthday Lecture with dessert reception. This year’s focus is “Shakespeare’s Virtues,” with Julia Reinhard Lupton of the University of California, Irvine leading a discussion on “how to be better and how to do better” drawing lessons and morals from Shakespeare’s plays, specifically Twelfth Night. Lupton will be joined by veteran Folger actor Eric Hissom delivering key speeches from the script, an offering Scott calls “a really fantastic way to wrestle with and enjoy Shakespeare’s language.”

Doug Rule covers the arts, theater, music, food, nightlife and culture as contributing editor for Metro Weekly. Follow him on Twitter @ruleonwriting.
← Previous Story Above and Beyond: Spring Arts Preview 2018
Next Story → DC Center and National Zoo partner for a day of celebrating equality among the animals