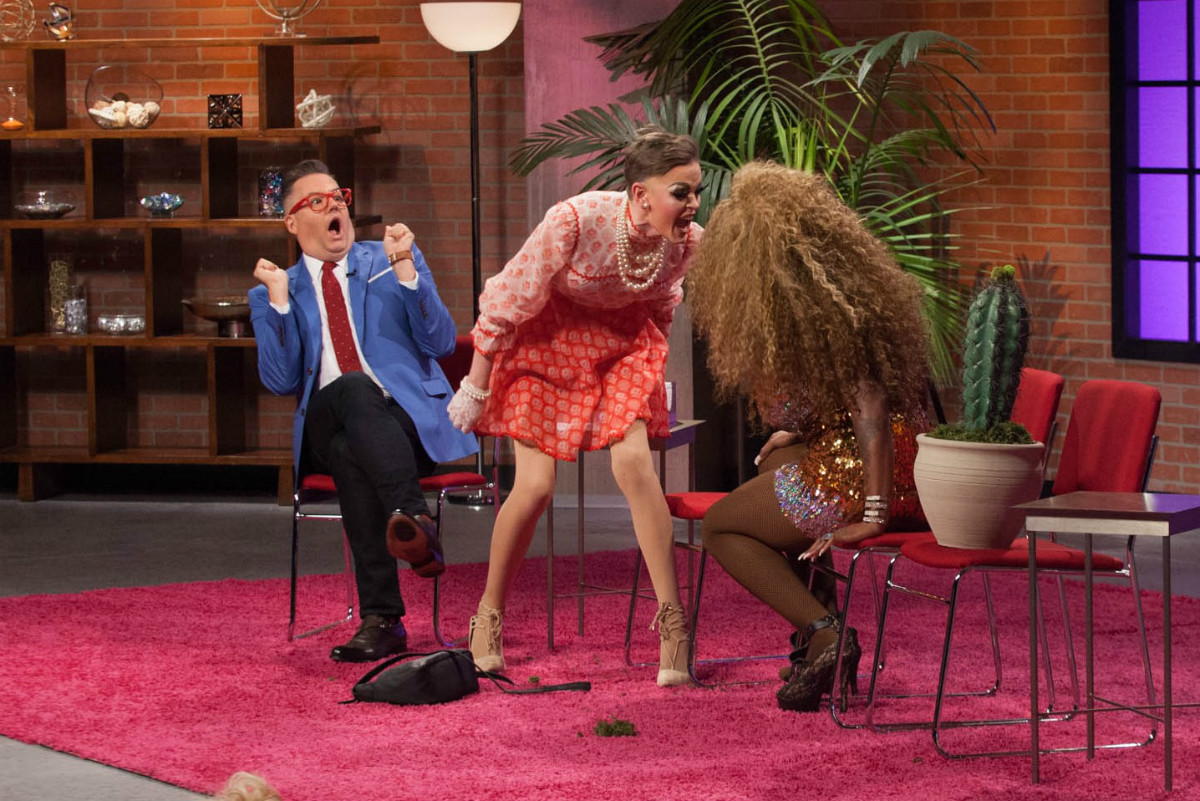 If there’s one truism to RuPaul’s Drag Race — other than the editing always lies — it’s that queens who set others up to fail inevitably end up faceplanting themselves. Sadly for season 10 firestarter The Vixen, it was her turn to learn this most painful of reality TV lessons, as a scheme to ruin both Eureka and Aquaria spectacularly blew up in her face.

Things got started, as always, immediately after last week’s iconic lipsync — we’re honestly still gagging over just how masterfully Monét X Change worked out “Pound the Alarm” — and Dusty Ray Bottoms’ elimination. Monét promised to do better this week, and after seeing just how fierce she can be, expectations were high.

However, it was Asia O’Hara’s turn for a dramatic moment, as she went into full-on meltdown over almost landing in the bottom three last week after helping every other queen with their outfits. Rather than move on, Asia has had it, officially, and will not be making the same mistake again. Cue some awkward exchanges from the other girls until Miz Cracker steps up to the mic to shut Asia down: “When you give a gift, you have to give it freely.” We feel for Asia, but she just torpedoed any sympathy the other queens may have had for her.

Anyway, on with the main event, and a set up for this week’s theme: The Vixen vs. everyone else, but mainly Eureka.

After a… well, let’s just say tense Untucked last week, which saw Eureka and Vixen going at it, Vixen seemed ready to take the high road. Just kidding, she’s actually going to completely ignore Eureka, because that will annoy her more. Ah, maturity.

This week’s mini-challenge had the girls donning military-inspired costumes, turning fatigues and camouflage fabrics into army drag. Everyone kind of turned it out, with capes, cutouts, and amusing explanations for their characters — shout out to the inspired use of grenades as earrings from Miz Cracker and Monique Heart.

The Vixen was declared the winner for vowing to fight for resting bitch faces everywhere, gaining the opportunity to set the teams for this week’s maxi-challenge. The queens paired up to star on fake daytime talk show Bossy Rossy, with Vixen choosing the pairs — and she was definitely not going to be shady about it.

Except that’s exactly what she was. While everyone else had reasonable pairings — Blair St. Clair and Monique, Kameron Michaels and Monét, Mayhem Miller and Miz Cracker, with Vixen picking Asia — she deliberately paired Eureka with Aquaria. “I didn’t try to fuck nobody over except those two,” she told Asia. Asia’s response was all of us: “You dirty bitch.”

The reasoning? Both Eureka and Aquaria enjoy the limelight — particularly Eureka — and Vixen believes it will implode once they both start vying for attention. Naturally, this isn’t going to go well — not least for Vixen, because reality TV.

The challenge itself was fairly straightforward/cringeworthy. The queens were each given a typically over-the-top Jerry Springer-style issue, which they had to act/improv as Ross Matthews played the host.

Are y'all ready for @helloross and the Bossy Rossy Show? #DragRace pic.twitter.com/ZargKe1pDz

Vixen and Asia had Why Are You So Obsessed With Me, and their premise was genius: portray Aquaria and Miz Cracker, playing off the rumors and ensuing drama that one has borrowed looks from the other. Monét’s reaction when Asia tells her the idea says it all: “Them bitches have some balls and I fucking live for it.”

In practice? It falls completely flat. Asia gave it her all as the obsessed character, but Vixen was one-note, only acting angry and annoyed. She then complained that Asia kept missing cues that they’d planned. The reason it was so messy? They didn’t rehearse. Rookie error.

Elsewhere, things were thankfully better. We’ve had talk show-themed challenges on Drag Race before, but the elements here kept things fresh, from the acting/improv, to the studio audience, to the fact this wasn’t a directed challenge with a CGI background — they actually built a set for the show. Plus, there were several genuine laugh-out loud moments.

Things kicked off with Blair and Monique, in I Married a Cactus. Blair played the prissy housewife to a large household cactus, who learns that he’s been cheating on her with Monique. It was ridiculous, laced with “prick” jokes, and Monique completely stole the show, whether talking directly to the cactus, pulling it closer, or just serving attitude on a plate. Also, props to both queens for keeping “Miss Vanjie” alive — they bizarrely used it as a safe word in case either went too far with the improv — that’s five episodes and counting for Vanessa Vanjie Mateo references. The best part? Monique snatched Blair’s wig to reveal her boy hair. Blair snatched Monique’s to reveal a blonde bob. It was a hilarious extra detail.

Next up were Monét and Kameron. Monét was worried about Kameron, who seemed to struggle coming up with lines and a character for their bit, My Freaky Addiction is Ruining My Life, leading to a great read from Monét about Kameron’s social awkwardness: “She might have been home-schooled, or something. I don’t know.” However, once again, the editing lied. Monét’s addiction to body padding was laughless, saved only by a surprisingly charismatic and funny Kameron who was addicted to huffing tucking panties. After a phenomenal lipsync last week, Monét needed a strong showing in the main challenge, but it was nowhere to be seen.

Following them were Mayhem and Miz Cracker, with Save Me From My Deadly Fear of…Pickles! Mayhem, who has been running flat the past few weeks after winning the first episode, struggled to shine alongside Miz Cracker, who proceeded to steal the whole goddamn show as Dr. Dil, who specialized in curing pickle phobias. She served pickle puns, sight gags, comedy, and incredible improv. Mayhem did her best, but the spotlight was very clearly on Cracker. And her fake self-help book title was genius, Dill With It: Learning to Enjoy and Relish Life By Opening a New Jar of Joy. We’re sold.

Following Vixen and Asia’s mediocre obsession skit were Eureka and Aquaria, with the mildly disturbing Look At Me! I’m a Sexy Baby! Aquaria, who won last week’s challenge, was just fine here, but — as Vixen predicted — Eureka proceeded to suck all of the oxygen out of the room. Not only was she basically naked, without wig or padding, but she used her oversized personality to its full effect, serving adult baby realness, complete with a rolling-on-the-floor tantrum. The studio audience ate it up. Eureka then had a moment of prescience in a piece to camera: “Vixen is probably bitter, because she’s the one that paired us together.” Yup.

Baby what baba?
Who else is this when you don't get your way?@eurekaohara #DragRace pic.twitter.com/4Faa6XJMX4

Before Vixen’s attempts at sabotage blew up in her face, there was time for another emotional moment in the workroom — though this felt distinctly less genuine. Mayhem attempted to patch the wound between Vixen and Eureka, getting them to talk out their feelings, and both revealed that they had intense personalities because drag gave them the freedom to truly express themselves. For Vixen, that expression is political and angry, for Eureka it is a freedom to be openly flamboyant after years of being bullied for it. It offered a little more insight into both queens, but it was hardly a complete resolution to the drama. (No producer-engineered Drama™ this week, it was a surprisingly mellow episode overall.)

Oh, and before we get to the runway, we tip our wigs to Aquaria, for one of the best lines of the episode. After hearing Vixen and Asia used Miz Cracker allegedly copying Aquaria’s drag as the basis for their skit, she read both Vixen and Miz Cracker (but mainly Vixen).

“Vixen feels very intimidated that not only is there one Aquaria to beat her out of the competition, but there’s another one too,” she said, gesturing to Cracker. We gagged.

Finally, it was the runway, and the theme this week was Denim and Diamonds, with special guest judges Carrie Preston and Shania Twain. (No, we definitely haven’t been listening to Come on Over on repeat since the episode aired…)

Though we’d argue that Miz Cracker had both a better main challenge performance (rivaled only by Monique) and a better runway outfit than Eureka, RuPaul clearly thought otherwise, as it was the returning season nine queen who won this week — and, in a not-at-all-planned turn of events, on the fifth episode, which just so happened to be the episode she was forced to leave last season. The queen Vixen set up to fail ultimately took the win. 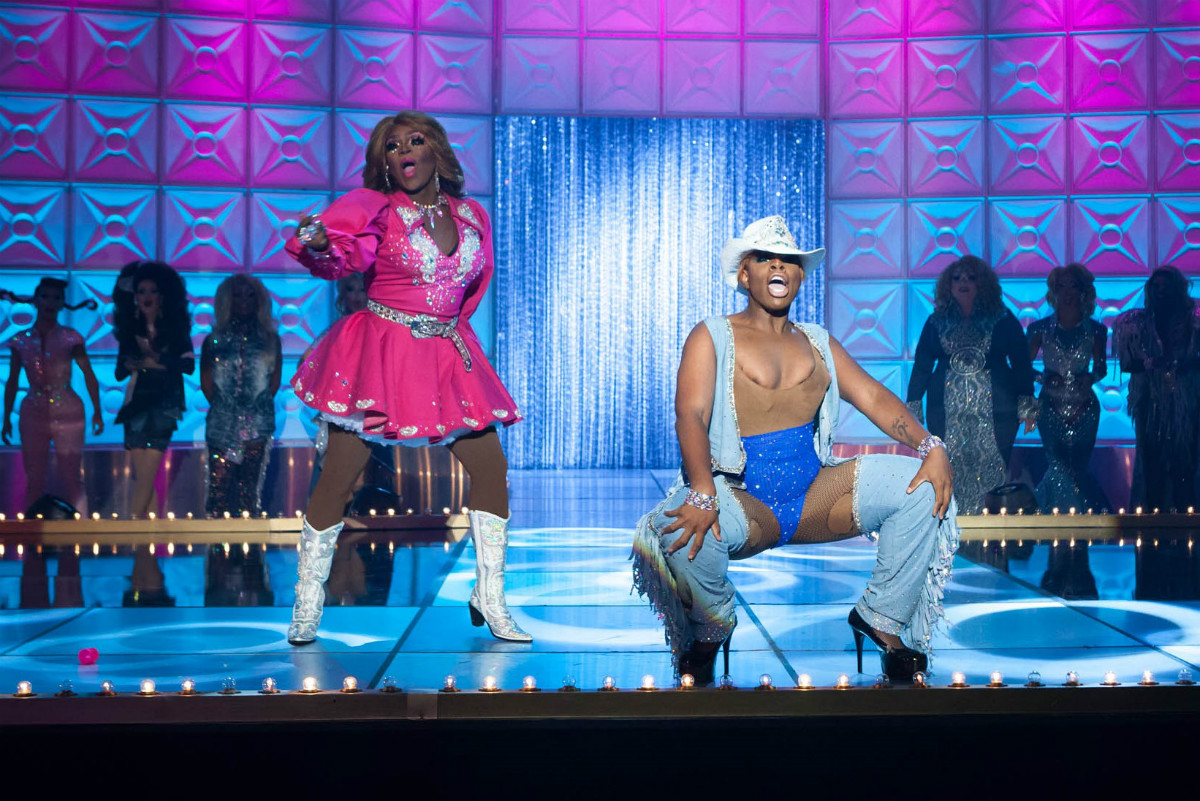 Not faring so well were Monét, Mayhem, and Vixen herself. After scheming and plotting, then failing to actually perform in the challenge, Vixen was likely saved only by her runway look, as it was Monét and Mayhem who lipsynced to “Man! I Feel Like a Woman!” by Shania Twain.

Really, nothing was going to compare to last week’s showstopping routine from Monét, and while she pulled out a few entertaining sight gags, her saving grace was that Mayhem served a pretty basic “bounce around the stage and high kick” routine that did little to distract as Monét colored her hair, threw off her wig, and stripped off her clothes (though she could have stopped before taking off her last layer, leaving her outfit awkwardly trailing behind her). Ultimately, Monét once again scraped through on the strength of her lipsync. Will she be so lucky a third time? Come back next week and find out!

And that was episode five. What did you think? Did you gag over any moments we missed? Did Eureka deserve her win? Let us know in the comments!

Read: Mayhem Miller: “I have more to offer than ALL of them!“

[crosslink]Also Read: Dusty Ray Bottoms: “I hope that I was able to change some lives”

Rhuaridh Marr is Metro Weekly's managing editor. He can be reached at rmarr@metroweekly.com.
← Previous Story Dusty Ray Bottoms: “I hope that I was able to change some lives”
Next Story → RuPaul’s Mayhem Miller: “I have more to offer than ALL of them.”