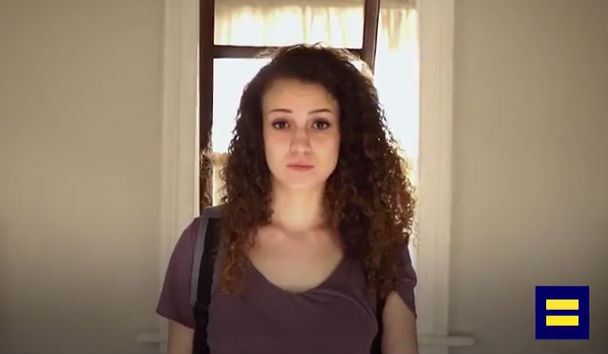 The Human Rights Campaign has released a new video featuring Alex Cooper, a young women who was forced to undergo conversion therapy.

In the video, Cooper, now an HRC Youth Ambassador, shares her personal story of how her parents kicked her out after she came out as a lesbian at age 15, and then enrolled her in a conversion therapy program in St. George, Utah. They even signed over their parental rights as part of the agreement.

“I felt like they got some sort of weird joy out of torturing children,” Cooper says of her guardians at the conversion therapy camp.

Cooper’s form of therapy involved having to carry around a backpack filled with rocks, to which more rocks would be added if she disobeyed. She was kept out of school for eight months, and often forced to stand staring at the wall for as long as 18 hours. She also recounts that two gay boys who she was living with were forced to repeatedly fight each other in order to toughen them up.

“I went to the same church as my grandparents every single Sunday, and they were told that, for this conversion therapy to work, they couldn’t look at me, they couldn’t speak to me,” Cooper says in the video. “That was really, really hard. It made feel like God was punishing me.”

Eventually, Cooper escaped and went to the police with the help of her English teacher. Since that time, she’s written a book, Saving Alex, about her experience. She’s also become a strong advocate of laws to prohibit conversion therapy.

Currently, 12 states and the District of Columbia have either statewide laws or insurance regulations that effectively prohibit licensed therapists or counselors from subjecting minors to conversion therapy. Governors in Hawaii and New Hampshire are expected to pass their own laws banning the practice.

“No child should be subjected to this practice that amounts to nothing less than child abuse,” Olivia Dalton, HRC Senior Vice President for Communications and Marketing,” said in a statement. “We’re thankful for Alex Cooper’s willingness to boldly share her story. It is our hope that this powerful new video will help fuel the momentum we are seeing across the nation as lawmakers on both sides of the aisle work with us to pass legislation protecting LGBTQ youth from this dangerous and discredited practice.”

The Human Rights Campaign has partnered with the National Center for Lesbian Rights in their push for legislation at the state level banning conversion therapy for minors. Both groups point out in their literature and public statements that the therapy is condemned by most reputable medical and mental health organizations. Children subjected to conversion therapy are also at higher risk of depression, decreased self-esteem, substance abuse, homelessness, and even suicidal ideation.

Cooper expresses hope for the future, expressing a message of support for other youth experiencing life situations similar to those she faced.

“It gets better, no matter what you’re going through,” she says. “There are people out there who want to help you. You just gotta find the right people.

“Being that person who reaches out to somebody who’s in trouble or needs help can influence that person’s life in the biggest way,” Cooper says. “We can all be that change.”

Watch the video of Cooper’s testimony below:

John Riley is the local news reporter for Metro Weekly. He can be reached at jriley@metroweekly.com
← Previous Story Anti-gay Tony Perkins named to U.S. Commission on International Religious Freedom
Next Story → Gay lawmaker implies Alabama governor is a lesbian