Love, sorrow, and longing are folded into the plot and into each delectable dish described in Mexican author Laura Esquivel’s beloved 1989 novel Como Agua para Chocolate (English title: Like Water for Chocolate).

Sánchez and company dive passionately into the multi-generational epic romance, spiced with dashes of narration and fantasy. Employing a keen sense of where to move the actors, and of transitioning the action across time and space, Sánchez, greatly abetted by Christopher Annas-Lee’s lighting design, keeps the narrative flowing with grace and imagination. Decades pass, but scenic designer Mariana Fernández’s set stays mostly the same, serving faultlessly as the homestead of the familia at the heart of the tale.

The family’s matriarch, Mamá Elena (Luz Nicolás), runs their ranch with a steady hand on her rifle, and her eyes pointed towards tradition. Her family’s history dictates that her youngest daughter Tita (Inéz Dominguez del Corral) can never marry, but instead must spend her life serving her mother until one of them dies. It’s a raw deal for Tita, who’s already stolen the heart of their neighbor Pedro (Peter Pereyra). He declares his love for Tita the very first time they meet.

But tradition rules, and Tita’s bad luck is her older sister Rosaura’s good fortune, as Mamá Elena refuses Pedro’s appeal for Tita’s hand in marriage and forces him to take Rosaura (Guadalupe Campos) instead. Pedro dutifully agrees to marry the sister he doesn’t love, reckoning that at least he’ll be nearer to the sister he actually loves. Perhaps simply breathing the same air will be enough to quench their desire.

Well, anyone older than a fifth grader knows this arrangement can only lead to misery, and it does. But the shared knowledge that Pedro’s marriage to his true love’s sister can’t end well is part of what binds the audience to these characters. Tita and Pedro and Elena’s extreme nods to convention and emotion are played out in grand style, across a landscape shaken by a violent revolution, and yet Tita’s dilemma comes down to the simple thwarting of a noble love.

Her plight is an oppression of her gender, her spirit, and her independence — but true love cannot be oppressed, the story says. Tita pours her thwarted love into her food, and manages to change her world that way.

Therein lie the story’s other potent points of connection: food, and the shared experiences of preparing and eating a meal, gathering in the kitchen, or around the family table. Nearly everyone is vulnerable to the power of those shared experiences, and the script cleverly exploits that universal relationship to food, dramatizing how it can bring joy or discomfort, pleasure or sadness. Tita’s food contains and expresses her emotions. Said to have been born crying, and swept from her mother’s belly on a wave of tears, Tita can cry into a casserole, and the taste of it will reduce a table full of diners to heaving sobs.

Clearly, there’s magic in Tita’s cooking, an otherworldly specialness that animates her cuisine. That spark can’t be located, however, in del Corral’s performance in the role. Her Tita feels plain, unconfident, comfortable as the object of Pedro’s adoration, but not in command of her own will and desires. Tita’s trial of deprivation should produce a knowing woman from the innocent girl introduced in the first act, but del Corral only faintly relays the evolution.

Pereyra does better getting under the skin of Pedro, a lovesick sap, more or less, who abides by Mamá Elena’s dictates but retains his dignity. As Elena, Nicolás projects the dignity and hurt of a nevertheless cruel and selfish mother figure. She almost single-handedly carries the current of dark history and pain swirling beneath several generations of this family.

Conveying the bulk of comic relief, Karen Morales mugs and mews as the family’s excitable maid Chencha. A little of this Chencha goes a long way. Teresa Yenque finds a truer voice and rhythm portraying the family’s other housekeeper, the stalwart, reasonable Nacha. And Yaremis Félix, as Tita’s other sister, Gertrudis, builds a full-bodied supporting character who aims for laughs without shooting to kill.

Gertrudis grabs her moments, because this is her story too, as Sánchez so effectively crafts from the dozen or so disparate plotlines a tightly cohesive portrait of a family (and nation) shaped by tradition, revolution, sex, food, and magic. 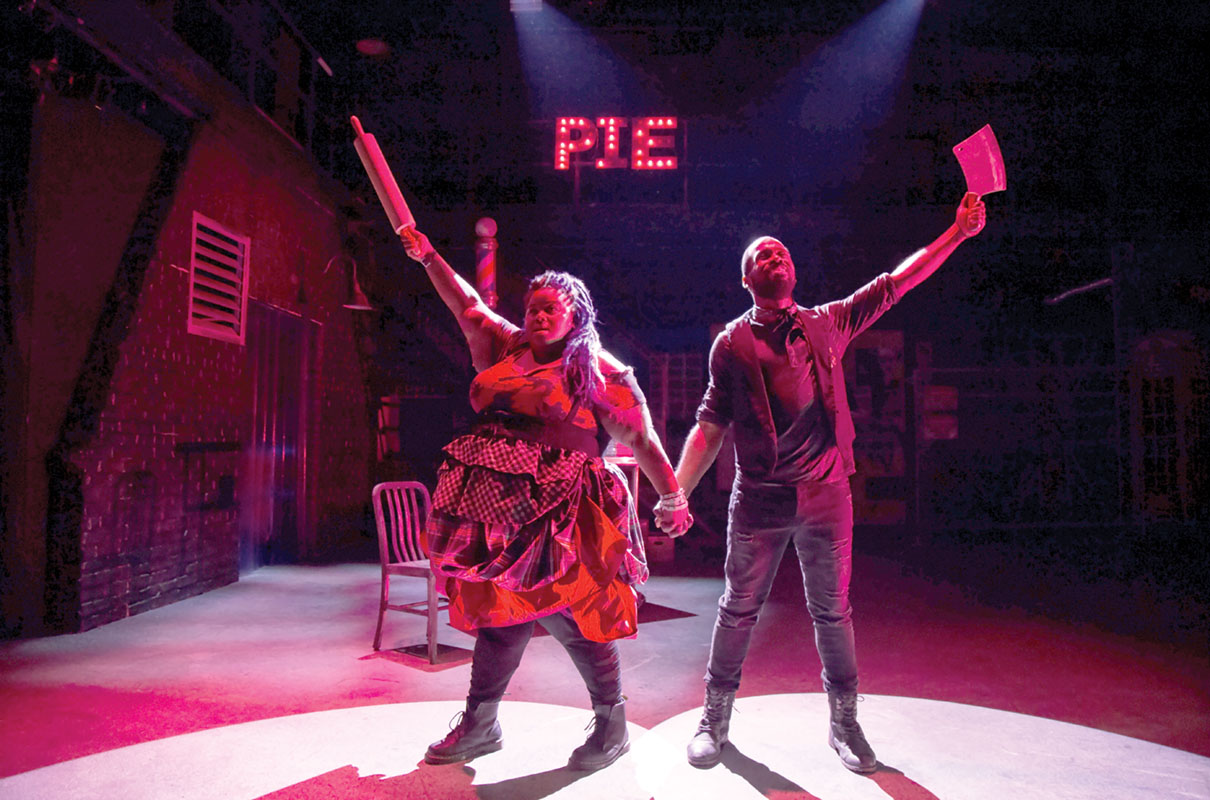 THE DEMON BARBER ENTERS AUSPICIOUSLY ENOUGH in REP Stage’s new, punk-lite production of Sweeney Todd: The Demon Barber of Fleet Street (★★★). But it’s his loony accomplice, Mrs. Lovett, who walks away with the show.

Jade Jones, recently seen onstage rolling around as a munchkin in The Wiz at Ford’s, rises to plant her feet firmly in Lovett’s lace-up boots, giving a superb lead performance. Alert to every note of Stephen Sondheim’s intricate score, and to each innuendo and layer of Hugh Wheeler’s script, Jones is a joy to watch, whether slinging the “Worst Pies in London,” or dreamily soaring “By the Sea.” Her Lovett is brassy but not too broad, a cold-hearted killer, and yet, a warm and loyal partner.

Jones supplies a sardonic sweetness that nicely counters the hissing bitterness enacted by V. Savoy McIlwain in the title role. Sweeney Todd, of course, has much to be bitter about, since he lost his wife and child when he was sent away to prison by the corrupt Judge Turpin (Nigel Reed). Hellbent on having his revenge against Turpin and his toady, The Beadle (Benjamin Lurye), Sweeney nevertheless gets sidetracked by other murderous pursuits, as he and Lovett turn his barber shop into a butcher supply for her meat pie pub.

It’s a bloody gruesome operation, although the production isn’t, relatively speaking. Director Joseph W. Ritsch opts for gestures and lighting effects to convey Sweeney’s horrific crimes and Mrs. Lovett’s ghastly oven. However, either due to timing or staging, the dreadful things that go on inside their shops rarely produce the visceral impact of genuine horror.

Similarly, the production’s gestures towards Trump-era commentary — including Turpin’s campaign poster: Make London Great Again — don’t generate much meaningful interplay with the text or characters. Turpin does harbor a repulsive affection for his ward, Johanna (Suzanne Lane), that could be read as a comment on current events. But Turpin is tawdry enough as is, without fixating on the first family, and the character’s multi-faceted villainy is delineated convincingly by Reed. This Turpin doesn’t do anything noteworthy with the songs, but he stands out as a portrait of an authoritarian who’s a kinky, controlling creep. On second thought, there may be hope yet for the Trump comparison.

Politics aside, Sweeney Todd also is at least three parts love story: Mrs. Lovett’s pining for Sweeney; the romance between Johanna and the innocent sailor, Anthony Hope (Noah Israel); and Sweeney’s love for his lost family. The last of these should drive Sweeney’s thirst for revenge, and presumably, might take new shape upon his discovery that his daughter lives, and, in fact, is Turpin’s ward, Johanna. But McIlwain, so good at suggesting Sweeney’s seething contempt for those responsible for the injustices he’s suffered, doesn’t get across how this father’s bloodlust might be changed by paternal affection. His anger, though justified, feels the same from beginning to end.

Lane gets across even less as the lovelorn waif Johanna. She sings beautifully, but doesn’t connect the music to a distinct personality for this young woman, whose tumultuous past and present could fill a collection of Brontë novels. Yet, Lane’s Johanna enunciates more powerfully than she emotes, leaving little purchase to grasp why Anthony, or Turpin, might find her so enchanting.

As her intrepid beau, Israel’s crooning is unsteady, but his performance captures the contrast between the bright-eyed romantic Anthony and the utter corruption of his surroundings. Striking another intriguing contrast to the dark and wounded is John Taos Foster as Tobias Ragg, the not-so-innocent young man who finds himself waiting tables for Mrs. Lovett. Ragg adds a great voice and humor to the ensemble, along with Lurye’s golden-throated cad Beadle, and the vivacious Justine Icy Moral, a solid team player in a number of roles.

Altogether, this ensemble is greater than the sum of its parts, and so too might be the production. Director Ritsch also choreographed the brief dancing, designed the cavernous East London set, and even contributed to the prop design, so deserves credit for galvanizing his cast and crew behind a vision for Sweeney Todd as a rib-tickling song-and-dance about avenging injustice. Credit also is due to musical director Stacey Antoine, for the lively interpretation of the score. But kudos especially to Jade Jones, for packaging the best of her talents and her collaborators’ input into such a brilliant, storytelling performance.

André Hereford covers arts and entertainment for Metro Weekly. He can be reached at ahereford@metroweekly.com. Follow him on Twitter at @here4andre.
← Previous Story Theater Reviews: Woolly Mammoth’s “Gloria” and Folger Theatre’s “Macbeth”
Next Story → Theater Reviews: If I Forget and The Pianist of Willesden Lane