OutServe-SLDN President Matt Thorn to step down in coming months 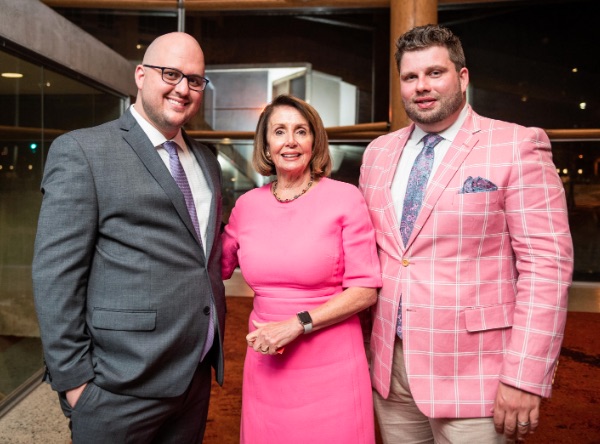 Matt Thorn, the president and CEO of OutServe-SLDN, the nation’s premiere advocacy organization for LGBTQ service members, veterans and their families, has announced he will step down from his position later this year.

As head of OutServe-SLDN for the past four years, Thorn has introduced educational and veteran service programming, and expanded legal services for service members and veterans by building a network of pro-bono partners who have assisted more than 2,000 individuals with their legal problems.

OutServe-SLDN created a partnership with Strive Health to provide clinical services to service members, veterans and their families, and will provide ongoing cultural competency training for Strive Health’s staff.

Thorn has led the organization as it has challenged several anti-LGBTQ policies, most notably the Trump administration’s proposed ban on transgender service members, and the ‘Deploy or Get Out’ policy that marked HIV-positive service members as “undeployable,” thereby putting them at risk of expulsion.

“It has been an honor and a privilege to serve as the president and CEO of OutServe-SLDN over the last four years. I have made the decision that now is the right time to step down,” Thorn said in a statement. “I could not be prouder of where the organization is today.

“We have dramatically increased our programmatic efforts while simultaneously suing the Trump Administration over their bigoted and unwise decisions to ban transgender service members and their ‘Deploy or Get Out’ policies which adversely affect service members living with HIV,” he added. “OutServe-SLDN is ready for its next chapter and I am thrilled the Board has selected Andy Blevins to be my successor.”

Thorn will officially leave later this fall, after a transition period where he will work alongside his successor, Andy Blevins, vice president of operations and strategy. Blevins will take over as executive director starting on Dec. 1.

Thorn received high praise from U.S. House Minority Leader Nancy Pelosi (D-Calif.), with whom the organization has worked on many pro-LGBTQ and pro-veteran initiatives.

“Matt Thorn has been an extraordinary leader and strong voice for OutServe-SLDN and the courageous LGBT service members they advocate for on a daily basis,” Pelosi said in a statement. “I thank him for his service and look forward to working with Andy Blevins as he assumes this leadership role during a pivotal time for our LGBT servicemembers and their families.”

Dr. Wesley Reynolds, the chair of the organization’s board of directors, also praised and thanked Thorn for his work and dedication to serving LGBTQ service members.

“We look forward to building upon the momentum Matt created and to continuing to expand our legal services and programming under Andy’s leadership,” Reynolds said.

Blevins, a Navy veteran and spouse of a transgender Army veteran, first started with the organization as a client and a founding chapter leader, and served on the board of directors for the Military Partners and Families Coalition, which merged with OutServe-SLDN earlier this year.

He also previously served in the Obama White House, clerked for the Oregon Department of Justice, and worked in a boutique law firm specializing in veteran disability law prior to accepting his current position.

Blevins said he was “humbled” to be chosen as Thorn’s successor.

“Over the last several years, an increasing percentage of our all-volunteer military force has publicly identified as a member of the LGBTQ community. These individuals are selflessly devoted to this nation and should be afforded the right to carry out that service under open and authentic conditions, without fear of reprisal,” he said in a statement. “As OutServe-SLDN’s Executive Director, I look forward to standing alongside my siblings-in-arms and demanding that our military forces be a conduit of change for society, precipitating the guarantee of equal treatment and just protections for all members of the LGBTQ community.”

John Riley is the local news reporter for Metro Weekly. He can be reached at jriley@metroweekly.com
← Previous Story 3rd Circuit urged to uphold Philadelphia’s pro-LGBTQ foster care policy
Next Story → Texas pastors sue the city of Austin for the right to discriminate against LGBTQ people