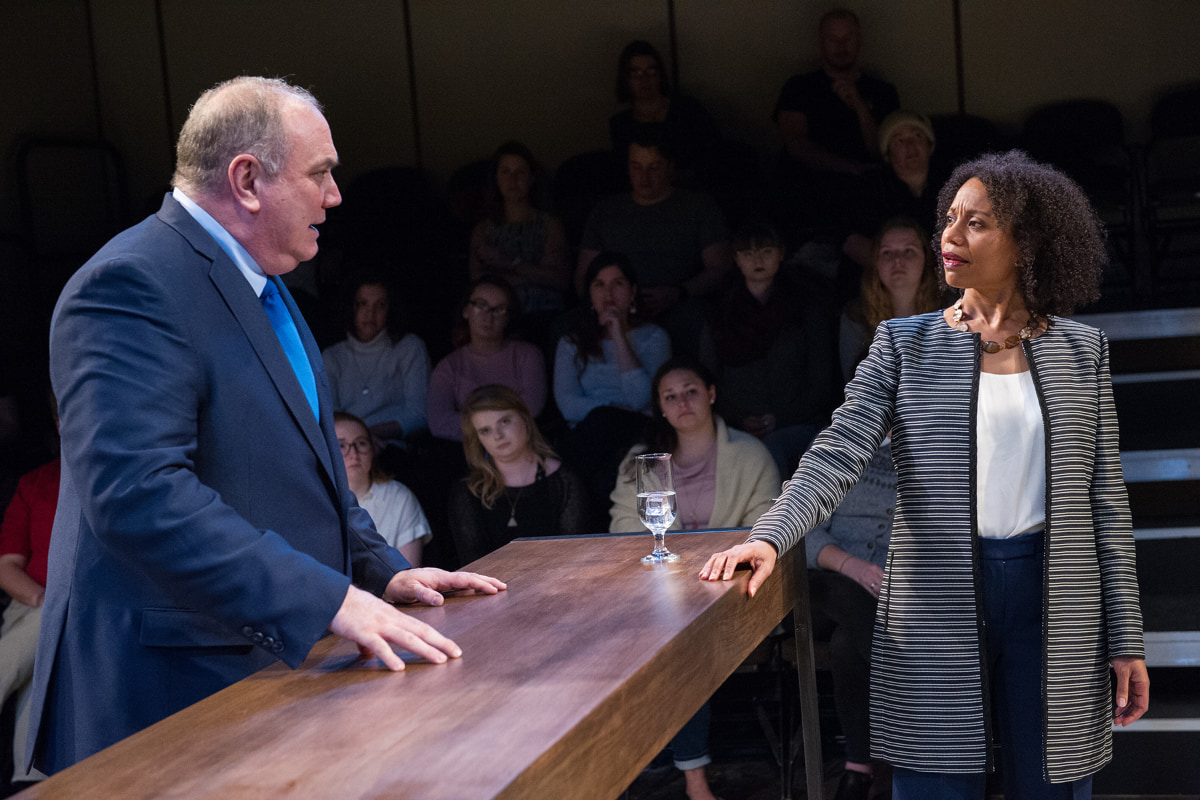 Sarah Burgess’ dark comedy Kings makes a snappy addition to the growing canon of fiction that pulls back the curtain on how the sausage gets stuffed in Washington, D.C. The play, which originally debuted last February at New York’s Public Theater, would seem smart and insightful just based on Burgess’ writing, even if the plot didn’t also presage the midterm victories of outsider candidates like Alexandria Ocasio-Cortez and Kyrsten Sinema. Yet the story’s prescience is matched at Studio Theatre by a cast and pacing that are tight as a drum.

Joining the likes of Veep and Vice in depicting the mightiest halls of government as lava pits crawling with vipers, Kings (

), tautly directed by Marti Lyons, spins its own credible version of down-and-dirty politics. Set amongst the lobbyists whose deep-pocketed clients influence, and in some cases dictate, public policy, the characters stalk the halls of conference hotels and fundraising retreats.

The play’s central character, newly elected Congresswoman Sydney Millsap (Nehassaiu deGannes), even meets with a lobbyist at a Northern Virginia Chili’s, but that’s because Millsap does things differently. The first woman and first person of color to represent Texas’ 24th District, as she’s constantly reminded, Millsap is new to D.C. and to politics, and unversed in the slippery tactics of lobbyists like Kate (Kelly McCrann).

But the congresswoman catches on quick. She has to think fast on her feet to stay steps ahead of the adversaries and allies, often indistinguishable, who would try to dictate her policies.

The cast — rounded out by Laura C. Harris as Kate’s venal lobbyist pal Lauren, who happens to be lesbian, and Elliott Bales as the senior senator from Texas, John McDowell — are fast on their feet as well. In each scene, many of which boil down to honey-dripping duels pitting Millsap against Kate, Lauren, or McDowell, the combatants switch on a dime from offense to defense and back again, with the actors never missing a beat.

Neither do the helpful hands who switch up scenic designer Luciana Stecconi’s handsome sets as they shift from that Chili’s to a Vail resort to a lobbyist-owned townhouse in Alexandria. Burgess, a native of Alexandria, captures the landscape and lingo of those creatures who roam the Hill and grease each other up over beers at Bullfeathers. 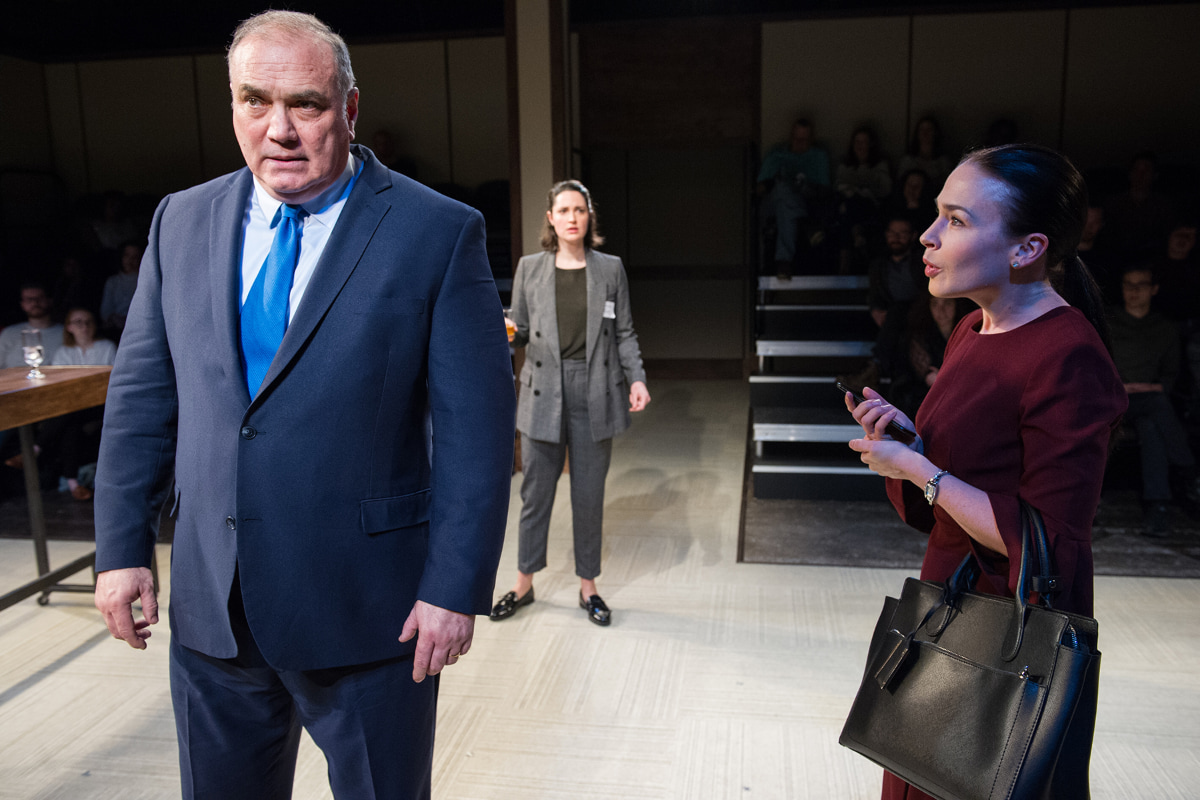 The script’s wit and plotting are pleasingly precise, probing corruption on every side of a Congress that’s starkly divided by party but not by their susceptibility to special interest dollars. While Kate promotes a portfolio of medical associations, Lauren reps banking and finance interests, and McDowell simply looks out for himself.

Only Congresswoman Millsap represents any genuine ideals about fair governance, and the play doesn’t go easy on her by any means. Through her rapid education in the cutthroat nature of D.C. politics, Kings relays a moving human story about what pitfalls await anyone who dares enter the Capitol feeling precious about their principles.

Thankfully, as played by deGannes, Millsap is none too precious herself. The newbie politician has a disarming habit of using bluntness to unmask people’s hidden motives, and she’s good at it. In deGannes’ turn, Millsap isn’t just tenacious but she’s crafty — without seeming calculating like either Kate or Lauren. 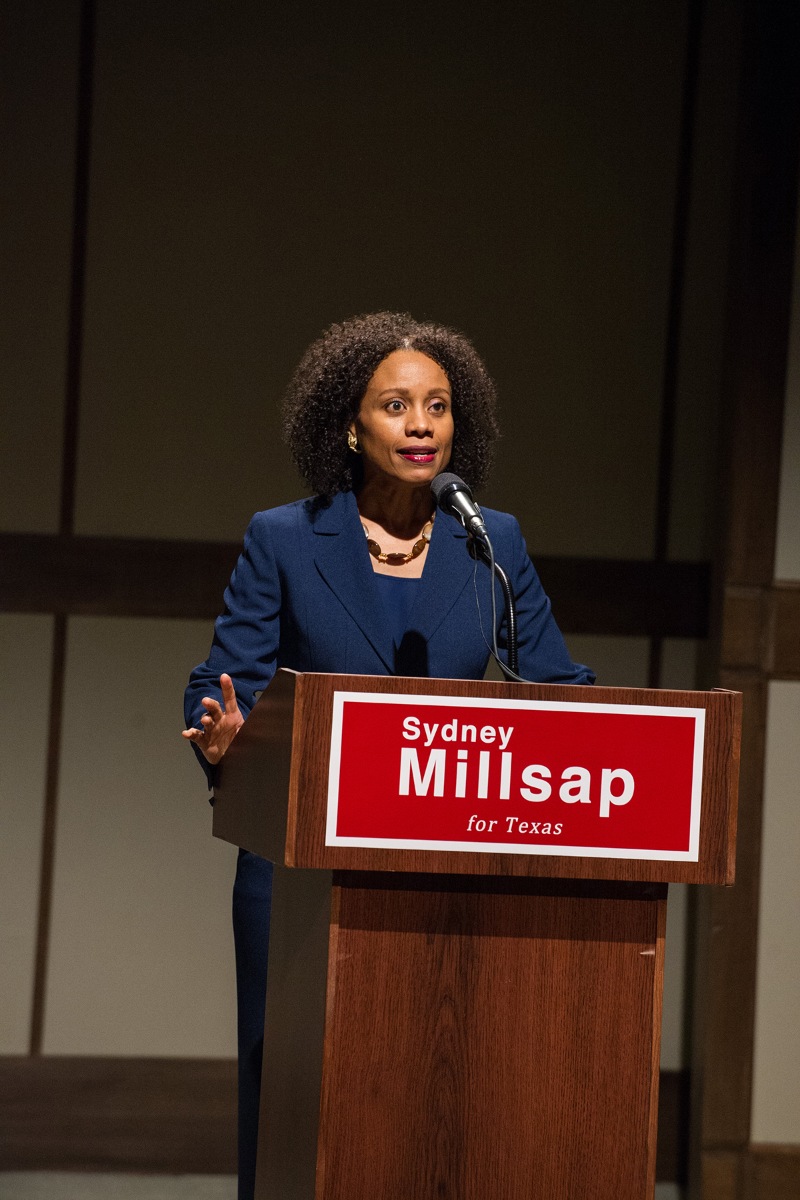 McCrann’s well-rounded performance as Kate does locate a pocket of genuine hope and altruism in the lobbying vet’s depleted moral makeup. Labeled derisively as the queen of medical associations for her clientele of podiatrists, ophthalmologists, and drug purveyors, Kate seems capable of putting those interests aside for a cause that might not be driven by making her clients richer.

She’s a character of a real-life sort talked about so often on cable news panels these days: the wayward political soul who just maybe with the right persuasion can be relied upon to put principle before profit, altruism before avarice, the people before the powerful. Beneath the cynicism, double-crosses, and biting repartee, Kings dares to dream that it’s not too late for Kate to do good, or for all those who believe an outsider can make a difference in Washington.

André Hereford covers arts and entertainment for Metro Weekly. He can be reached at ahereford@metroweekly.com. Follow him on Twitter at @here4andre.
← Previous Story A refreshed John Waters Christmas returns to the Birchmere
Next Story → Theater Review: The Panties, The Partner and The Profit