The ensemble of Ford’s Twelve Angry Men attacks the courthouse drama with all the subtlety of a WWE cage match.

These men are angry alright. Assembled in a New York City court of law to decide a first-degree murder case, twelve jurors, all male, argue, fight, and offend with scant provocation. Their ready combativeness suits the times, of course. Civic bodies convened for the purpose of coming to level-headed decisions based on facts and principles of law have been known to degenerate into petty squabbles and in-fighting.

That was true at the dawn of the Civil Rights Era, when Reginald Rose first wrote the Emmy-winning Twelve Angry Men teleplay that he then adapted for the stage and the classic film. And the divisiveness that often overtakes these dozen strangers is an apt reflection of what’s true now.

But the jurors of Sheldon Epps’ new production of Twelve Angry Men (★★) at Ford’s Theatre just seem especially, and unconvincingly, quick to leap at each other’s throats. The pitch of “Let me at him!” rage feels too easily provoked and insufficiently supported by the characterizations and performances.

Set entirely inside the jury room, the play wants to establish an ebb and flow of discussion and debate that erupts into outbursts and confrontation. It’s democracy in action, the turbulent yet steady process of thoughtful and emotional deliberation that leads to a just consensus.

Woefully, Epps and company render this exercise in democracy an unsubtle exercise in every character getting his turn to talk — or, rather, lose his cool.

Some of them listen, too, at the behest of Juror #8 (Erik King), who first suggests that the group at least deliberate over the evidence before unanimously deciding the defendant’s guilt. And the audience listens, absorbing every detail of a mystery, as the men — representing different types, classes, and backgrounds — argue the facts of the case.

Their arguments are shaped — or tainted — by their own personal biases. One juror wants to convict because he was persuaded by the physical evidence, while another just wants to wrap up deliberations so he can make it to his ballgame. One man, blue-collar Juror #10 (Elan Zafir), is prepared to condemn the 16-year old defendant, not merely because he believes the boy is guilty, but because he holds people like the defendant in utter contempt. “They breed like animals,” he sneers.

In the ’50s, when fair-minded Juror #8 was Henry Fonda and there were only white men in the jury room, the audience knew who “they” were. Given the diverse casting of this production, “they” are whomever else doesn’t have a seat at the table. Rose’s play definitely still poses trenchant arguments. It’s the arguing that feels rote in this production, a rinse, spin, repeat cycle of each juror rising from the table to plead his case only to get shouted down or uplifted.

Character intros are followed by insults, then defenses, attacks, reflection, and reconciliation. The formula could be propped up by compelling characters, but only half of the ensemble nail down a character who lives and breathes beyond their respective jury number, and façade of traits and opinions. The other half just programmatically adopt combative or defensive stances.

As two of the most vocal, Jurors 8 and 10, King and Zafir do standout work, playing men who reside on opposite poles of compassion and fairness. Christopher Bloch, as Juror #4, and Bru Ajueyitsi, as Juror #5, contribute fine turns as men from opposite poles of privilege. And, as one of the more understanding jurors among the twelve, Craig Wallace, a Ford’s favorite, conveys a man who’s brought decades of life experience into that jury room.

The room itself, with its towering ceiling and high banks of windows, conveys the importance of a jury room, signaling the weight of this or any jury’s duty in deciding guilt or innocence. In that sense, scenic designer Stephanie Kerley Schwartz and the production crew manage to deliver more character with an impressive space than some of the actors do with pages of dialogue and a handful of onstage tirades.

Read Next: Studio’s Admissions lightly skewers white privilege and the race for diversity 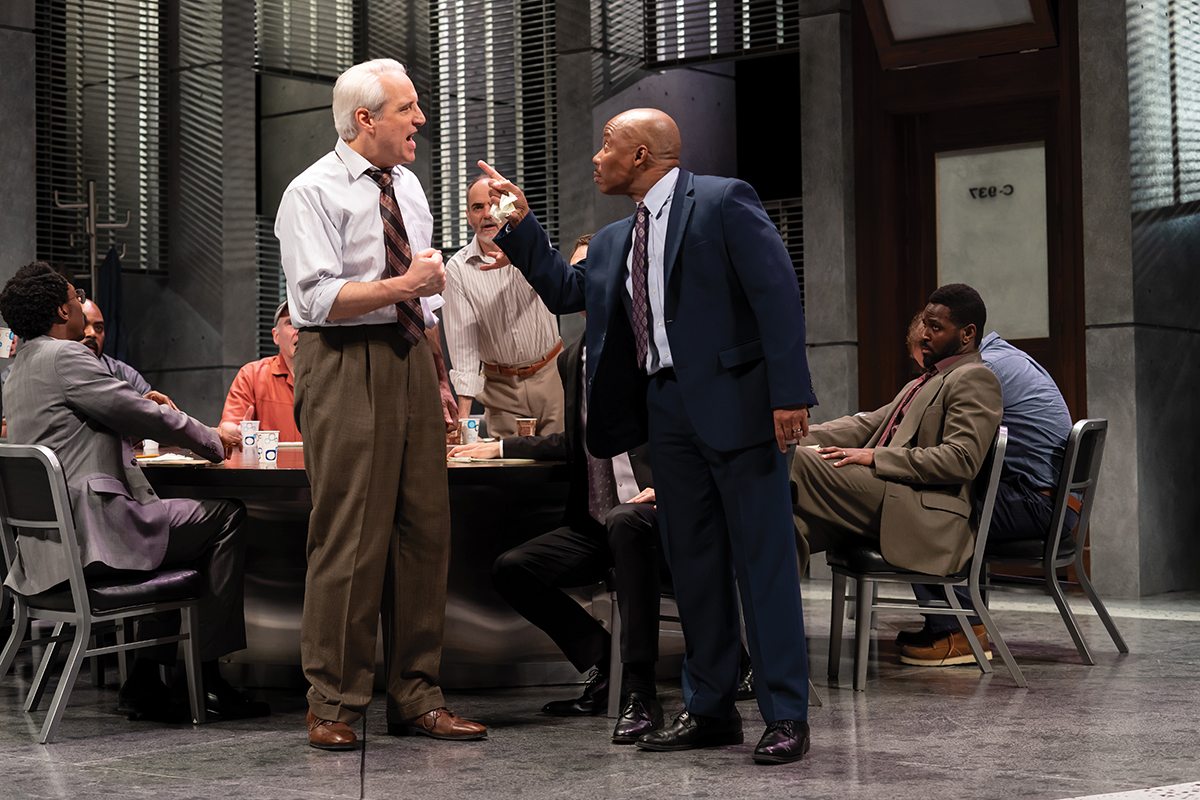 André Hereford covers arts and entertainment for Metro Weekly. He can be reached at ahereford@metroweekly.com. Follow him on Twitter at @here4andre.
← Previous Story Theater Review: Admissions at Studio Theatre
Next Story → Keegan’s ‘The Baltimore Waltz’ is “a remarkable and stunning piece of theater”