For 70 years, the James Beard Award-winning Annie's has served the LGBTQ community with pride, love, and the kind of spirit only a family can offer

Walk into Annie’s Paramount Steak House on any Saturday morning and you’re likely to feel as though you’ve entered a family kitchen, rather than a bustling 17th Street restaurant. By mid-morning, people begin crowding into tables, booths or filling up the seats along the bar as they recount the prior evening’s activities over coffee, eggs, and hash browns.

Waiters sprint back and forth, taking orders and delivering food, ’90s-era pop music trickles from speakers over the din of customer chatter and the clink of cutlery and dishes, punctuated by occasional bursts of laughter from patrons reacting to witty one-liners doled out by longtime bartender Scott Paxton and veteran server Al Sekscienski. If Mano is on duty, and you’ve ordered steak to go along with your eggs over easy, he’s likely to commandeer your knife and fork and lovingly carve a few pieces to get you started. The overall atmosphere is relaxed and comfortable, the mood light and festive, as customers and staff alike smile, joke, and banter.

“People come in just to see you and hang out,” says Paxton, who has worked at Annie’s for 19 years. “They know that they’re going to have fun. What I always tell people is, ‘If you sit at my bar and you don’t have a good time, there’s something wrong with you.’ Because I make it fun and friendly and carry on with people, and have my quips and fast snapbacks and everything like that. They’re like, ‘Oh, it’s dinner and a show,’ and I’m like, ‘Yeah, pretty much.'”

Recently named by the James Beard Foundation as one of its 2019 America’s Classic award winners, the steakhouse and “comfort food” restaurant has long been a fixture in the Dupont Circle neighborhood — and particularly in the LGBTQ community, whose members started patronizing Annie’s in its earliest years. Its patrons are fervently loyal.

Loyalty, however, goes both ways. The restaurant has consistently given back to the community, whether holding fundraisers for Whitman-Walker, donating money to the NAMES Project Foundation’s AIDS Memorial Quilt, sponsoring the Gay Men’s Chorus, or, donating to Food & Friends — the local nonprofit that delivers meals to people with life-threatening illnesses — through its popular, citywide fundraiser, Dining Out for Life. Annie’s has been participating in the event since its inception in 1997.

As part of this year’s Dining Out for Life, next Thursday, April 4, Annie’s will continue a longstanding tradition of donating 100% of that evening’s dinner receipts to Food & Friends. For owner Paul Katinas, it’s yet another way for Annie’s to support LGBTQ people, who comprise a significant portion of Food & Friends’ client base.

“Dining Out for Life is great, because I don’t have to orchestrate a major fundraiser,” says Katinas. “It’s there, built in for us. This is a way we can show our support to the gay community and show that we genuinely care. It’s a worthy cause.” 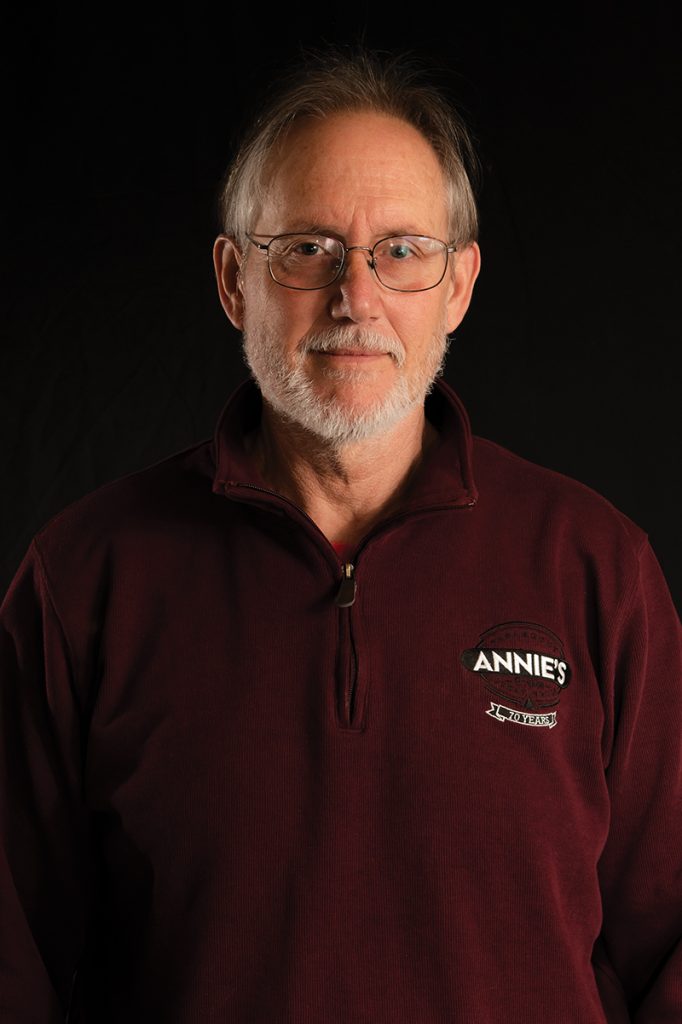 The night of Dining Out for Life is always busy, and the restaurant is typically crammed to capacity, with lines winding out the door and along the sidewalk. Paxton enthusiastically welcomes the throngs.

“I love working that particular night because it’s very busy,” says Paxton. “It’s standing room only, and mainly because we do give 100% [to Food & Friends]. I think that’s one of the reasons why we have the support we have, because we do give back where we can. [The event] brings new faces in. And now that we’ve won the James Beard award, I see even more new faces.”

And those new faces sit alongside mainstays that return to Annie’s week after week, even as the Dupont Circle neighborhood around the restaurant has begun to evolve, and what was once known as the “gayborhood” has experienced an influx of young, upwardly mobile professionals.

“We opened our doors to the gay community at a time when [most] doors weren’t open,” says Katinas, who at 59 still retains the youthfulness of a man half his age. “It wasn’t a fake door opening, it was the real thing. ‘You’re welcome to come in here, and we’re going to take care of you as best we can.’

“I started working back full-time at the old location [near JR.’s] when I graduated from college in ’82,” he says. “I started working the lunch shift. At lunchtime, it was a little bit more of a mixed crowd, but still a good 50 percent was the gay community, and everybody got along. At nighttime, we’d get to almost 80 or 90 percent gay. Everybody had a blast. Everybody loved it. Then it seemed D.C. expanded, with lots of restaurants, and the door had been opened for the gay community a lot more, so the younger generation had lots more choices. They haven’t totally adopted us.”

Katinas believes that being named one of “America’s Classics” by the James Beard Foundation has sparked renewed interest in the restaurant, particularly amongst the area’s Millennial “foodies.” He feels that younger LGBTQ patrons, once they dig into Annie’s savory and tender Queen Cut Prime Rib or signature, sizzling Bull in the Pan or perfectly grilled New York Strip, will quickly become regulars.

When it comes to the menu offerings, Katinas is happy to stick with traditional, tried-and-true dishes that are wholesome and filling, rather than attempting avant-garde or exotic fare like those seen on the latest trendy cooking shows.

“The menu doesn’t change that often,” he says. “The staple is definitely the steaks. The chicken has picked up, especially as of late. There’s some seafood here and there. A strong enough variety where people have choices. Lots of salads and things that people enjoy, sandwiches. The portions, in my opinion, are good and people won’t go away hungry. I think that’s important as far as comfort food goes.

“During our 70th anniversary year, we had a nice review by The Washington Post, but in my opinion, it’s not the kind of review we like to have, because it was more of, ‘Is this a five-star eating environment?'” he adds. “That’s not what we’re about. If you look at the write-up from the James Beard Foundation when we won the America’s Classics award, that’s what we’re about. We provide the best food for the best prices that we can.”

There are few places in town where you can get more satisfying appetizers to share — Jalapeno Poppers and fried calamari immediately spring to mind. Or a variety of steak, seafood, and poultry that never wavers in quality, or in the reliability of its preparation. And, oh, those Annie’s cocktails — generously sized and flawlessly mixed. The Spicy Bloody Mary, rimmed with a thick coating of Old Bay Seasoning is, in particular, the epitome of the perfect “anytime” drink.

“There are a lot of restaurants. Food, you can find it anywhere. This place is for love. To me, you’re not a customer, you’re a part of my family.” — Mano

“Annie’s is my home away from home, to be honest, and after working here for 19 years, you get to know people,” says Paxton. “We have a lot of employees that genuinely get to know the customers, and they come in to see them as well as get really good food.”

“When people walk into a restaurant, they can feel whether it’s loose and laid back and comfortable or not,” says Katinas. “I think when people walk in, that atmosphere is here. It’s comfortable. Because we like to make people feel like they’re at home.”

Or, as one of Annie’s most well-known employees, Mano, who has been with the restaurant for 43 years and was one of the first male servers hired, says, “There are a lot of restaurants. Food, you can find it anywhere. This place is for love. To me, you’re not a customer, you’re a part of my family.” 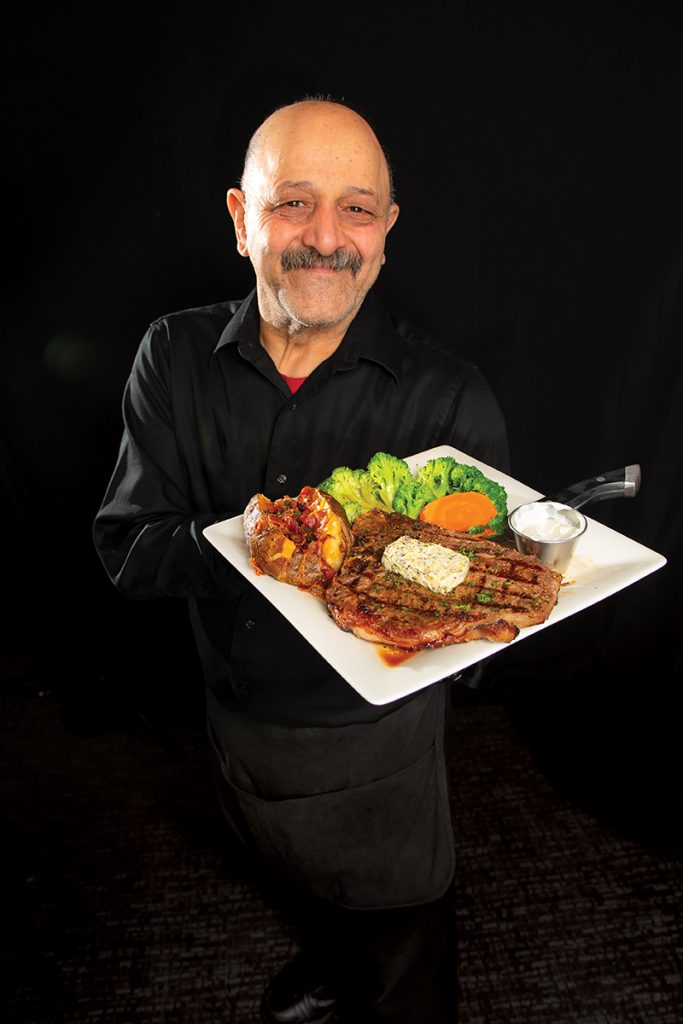 For Katinas, Annie’s is a family business. It was started by his father, and has employed an estimated 50 extended family members over the span of seven decades — including, most notably, his aunt, Annie Kaylor, the restaurant’s flamboyant and friendly namesake, who passed away in 2013.

“Initially it was just my father,” says Katinas. “Then he brought in his sisters, Annie and Sue, who both worked the bar. They were like night and day. Annie was this showtime bartender that was like a hurricane in the bar, stirring drinks with her fingers, eating mashed potatoes while she’s talking to her customers. Sue was very meticulous. She used a shot glass for each one of her drinks — very much a perfectionist. The important thing was all the customers absolutely loved them. And Annie and Sue loved the customers.”

Beyond Katinas’ own family, Annie’s has also employed relatives of employees for many years, and — perhaps most importantly — has managed to retain employees for decades in an industry notorious for high staff turnover.

“I get along with anybody, but the employees know I’m not scared to get on my hands and knees to clean something or things like that,” says Katinas. “They know I don’t think I’m any better than they are. It makes them comfortable, and it makes them want to stay dedicated to the establishment.”

Of course, some of the restaurant’s employees with larger-than-life personalities continue to carry on the tradition, started by the original Annie, of making their dining experience at the restaurant as entertaining as possible.

“I’ve had people dancing on the tables, showing me body parts I didn’t want to see,” says Al Sekscienski, who has worked at Annie’s since late 2000. “But that’s kind of normal for here.

“[Annie’s] just feels like home to people, and it’s very friendly,” he continues. “I met my boyfriend here. Friends of mine have met friends they’ve had for 10, 15 years now. You’ll always meet interesting people here. And that’s why I love it.”

John Riley is the local news reporter for Metro Weekly. He can be reached at jriley@metroweekly.com
← Previous Story Dining Out for Life 2019: Your Complete Guide to Every Restaurant
Next Story → The Advocate: Mara Keisling on Trump, the Equality Act, and fighting for trans rights