A colorful, kid-sized adventure, "Shazam!" adds a super-powered goofball to the DC Universe 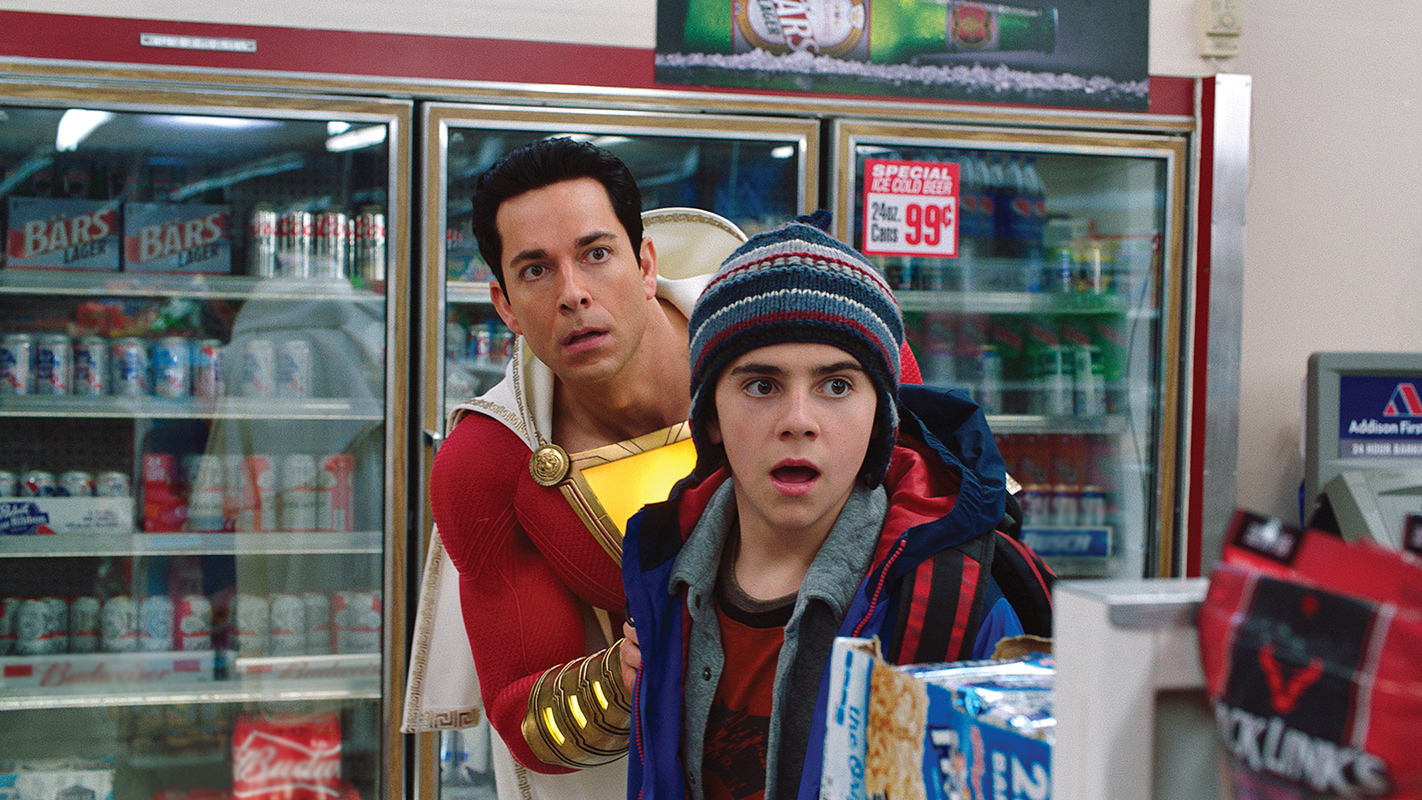 Every silver screen superhero should have as much fun flying, leaping, and shooting thunderbolts from his fingertips as Billy Batson has playing hero in DC’s Shazam! (★★★).

Wait a second, Marvel does have a musclebound superhero who relishes nothing more than flying, leaping, and shooting thunderbolts from his fingertips. But, actually, nothing gets Marvel’s God of Thunder, Thor, more excited than vanquishing his enemies and savoring their defeat. Judging by this delightful, undemanding origin story, directed by David F. Sandberg (Annabelle: Creation), Billy hasn’t quite acquired that taste yet — but he’s just getting the hang of this superhero biz.

Billy (Asher Angel), a teenage orphan who has run away from six different foster homes, lucks out in being chosen by the ancient wizard Shazam (Djimon Hounsou) as the champion worthy of gaining the wizard’s awesome powers of strength, speed, and invulnerability, among others. Simply by speaking the wizard’s name, Billy transforms into the strapping superhero Shazam, played with visible glee by erstwhile Chuck star Zachary Levi.

The strongest message of the film, however, is that Billy, separated from his mother at a tender young age, truly lucks out in being chosen by foster parents Rosa (Marta Milans) and Victor Vasquez (Cooper Andrews) to join their loving, sitcom-happy family. Occupying a ramshackle, though luxuriously spacious, old Victorian in working-class Philadelphia, the Vasquez household, including disabled teen Freddy Freeman (Jack Dylan Grazer) and adorable five-year-old Darla Dudley, warmly embraces Billy. He still rebels, but, ultimately, he learns that found family is worth fighting for, especially when they all come under attack by a super-powered villain, Dr. Thaddeus Sivana.

Sivana, essayed with sinister flair by Mark Strong, has been chosen to be the evil champion of the Seven Deadly Sins, and he makes for a strikingly ruthless villain in what is essentially a kids’ movie. Sandberg built his reputation creating a number of well-received sci-fi and horror shorts, and he clearly enjoys injecting jolts of terror and suspense to spice up the tone of family-friendly fun. 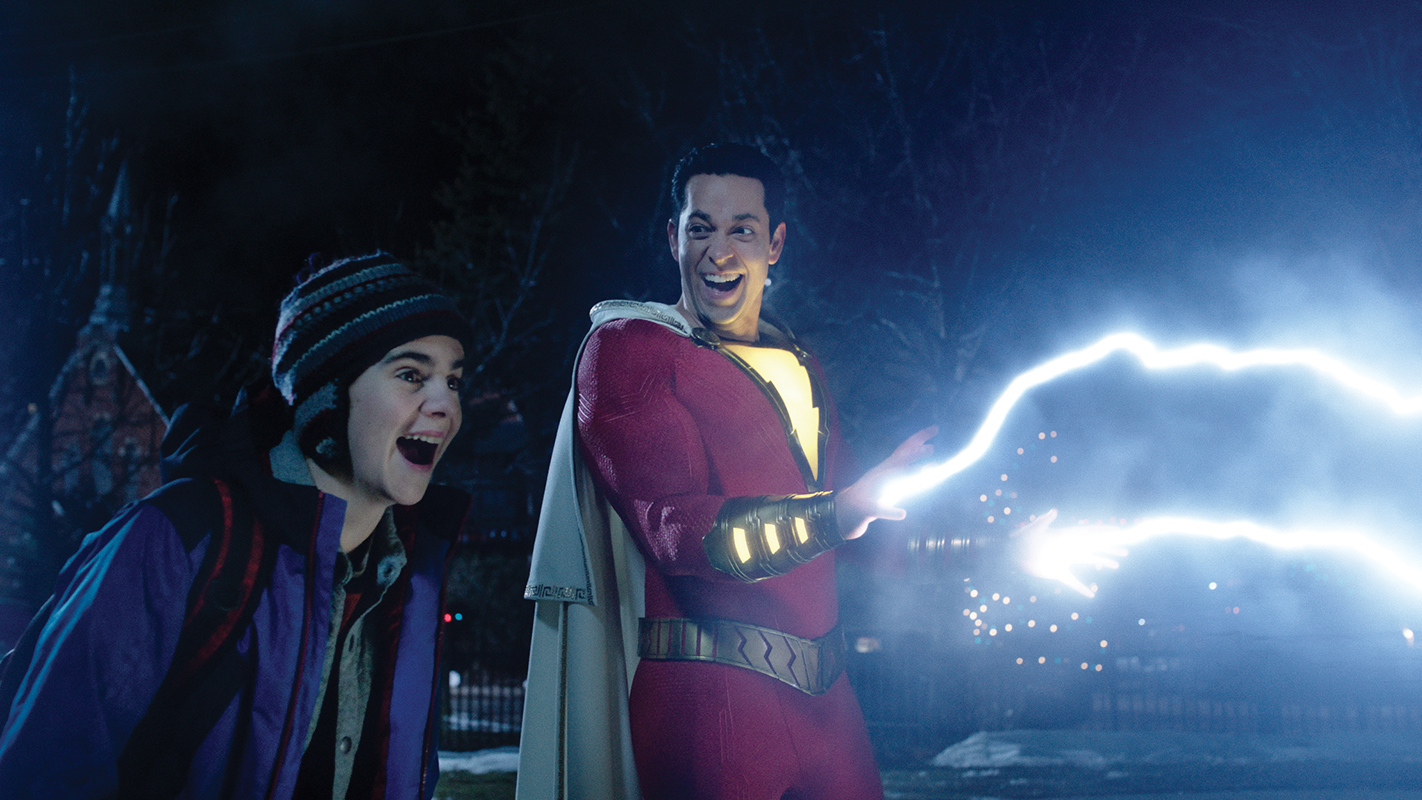 The film earns its PG-13 with each gruesome appearance of the Deadly Sins, a frightening coterie of fanged, voracious demons. Sivana unleashes the hellions on his enemies in one surprisingly grisly scene that might give younger tykes nightmares, but should certainly go down well with the 13-year old demographic the movie seems to be targeting.

The film’s humor definitely is designed to tickle the funny bones of sex-obsessed 13-year old boys, or the 13-year old-at-heart, who might chuckle at jokes about placing hands on the wizard’s staff, or at the painted sign over a carnival darts game that reads “Bust One Wins.” There are loads (ahem) of juvenile quips and innuendoes, and they won’t do much for the serious set that favors Christopher Nolan’s feverishly textured Batman epics, or Zack Snyder’s brooding super-bores, over somewhat silly fare like Shazam!.

Yet, despite their differences in tone and temperament, this Captain Marvel (the hero’s original comic-book moniker) does occupy the same cinematic universe as Snyder’s Caped Crusader, Man of Steel, Aquaman, and the Flash (and presumably Wonder Woman, though she’s not referenced here). Will audiences ever see Shazam fighting alongside the Justice League crew? DC isn’t saying, and this movie doesn’t reveal much about the character’s future beyond this Big-inspired debut.

If and when he does return, let’s hope the costume department has better ideas for Shazam’s famously square super-suit, red, tight, and emblazoned with his thunderbolt, accented by a jaunty toga-like cape, alluding to the gods that comprise his acronymic name and abilities. (That’s Solomon, Hercules, Atlas, Zeus, Achilles and Mercury, for anyone wondering.) Levi is as hunky as they come, and a kick as an adult-sized adolescent, but he still appears to be wearing an inflatable fake muscle suit, just as Hounsou appears to be clad as a wizard at a Ren Faire.

The suits and cheesy hairpieces can go, but Angel, costar of Disney Channel’s Andi Mack, will be more than welcome to return as the kid half of this heroic tandem. His performance is one of Billy’s biggest strengths, in addition to the kickass Vasquez family, who we can hope also will return the next time Billy faces down one or more of those nasty Deadly Sins.