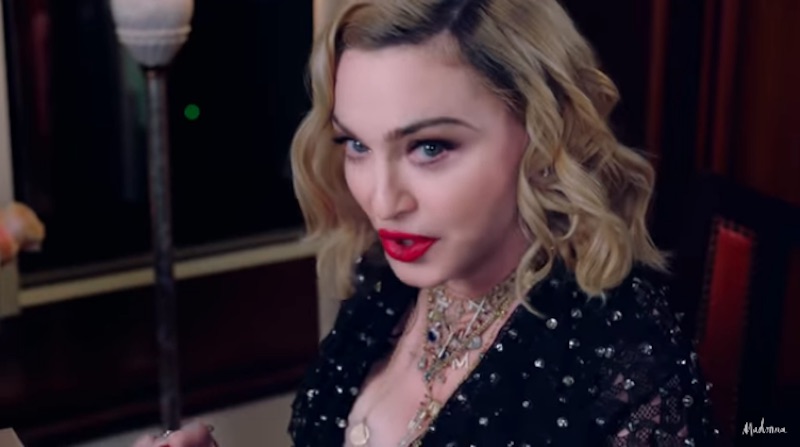 Following her performance at the Billboard Music Awards and the announcement of her new album Madame X, set to be released on June 14, Madonna, in conjunction with Live Nation and Maverick have announced that the self-styled “Queen of Pop” will hold a series of “intimate performances” as she tours theaters in select U.S. and international cities.

Beginning on Sept. 12 at the BAM Howard Gilman Opera House in New York, Madonna will perform at the opera house for 7 nights before moving on to Chicago’s Chicago Theatre for four nights, and Los Angeles’s The Wiltern for five nights, before moving on to the Colosseum at Caesars Palace in Las Vegas, the Boch Center Wang Theatre in Boston, The Met Philadelphia, and at the Fillmore Miami Beach at the Jackie Gleason Theatre in 2019.

The tour will resume abroad in 2020, with performances at the Coliseum in Lisbon, the Palladium in London, and the Grand Rex in Paris.

Madonna released a video on YouTube featuring DJ Diplo announcing the tour (complete with a laugh track poking fun at her idea of touring theaters).

“The chance for fans to see Madonna at these venues is incredibly special,” Madonna’s longtime promoter, Arthur Fogel, the president of Global Touring and chairman of Global Music for Live Nation, said in a statement. “We are proud and excited to be able to deliver this ultimate opportunity for her fans.”

Madonna, the best-selling female solo touring artist of all time, previously set the record for the highest-grossing concert tour ever by a female artist in 2008-2009 with her Sticky & Sweet tour, which grossed $408 million.

Her latest tour, Madame X, is inspired by time spent living in Lisbon, Portugal, over the past few years and will celebrate Madonna’s career-long affair with Latin music and culture. She is currently in the process of releasing five individual songs prior to the album’s release. Already, she has released the ballad “I Rise,” and the critically-acclaimed “Medellín,” and will soon release pop song “Crave” featuring Swae Lee on May 10, the Jamaican dancehall-inspired “Future,” featuring Quavo, on May 17, and “Dark Ballet” on June 7.

To ensure fans have best access, ticket requests for all shows will be accepted through Friday, May 10, at 11:59 p.m. at www.madonna.livenation.com. Fans whose requests have been confirmed will be notified by May 17. Tickets will be scale between $60 and $760, with VIP and Travel packages available. Every ticket purchased will come with a copy of the Madame X CD. Tickets are limited to 4 per person.

Additionally, fans will have the opportunity to enter for a chance to purchase tickets at $10 a head at Madonna.com. There will be 10 such tickets available per show, and fans will be notified on the show date if they have been selected to attend that evening’s performance.

For more information on the tour, tickets, VIP and Travel packages, and future performance dates, visit www.madonna.livenation.com or www.madonna.com.

Related: Madonna at GLAAD Awards: “It is every human’s duty to fight, to advocate” for equality, human rights

John Riley is the local news reporter for Metro Weekly. He can be reached at jriley@metroweekly.com
← Previous Story PrEP helps reduce new HIV infections to record low in Australia
Next Story → Nyle DiMarco: We need the Equality Act, because LGBTQ people have “no absolute protection from the government”