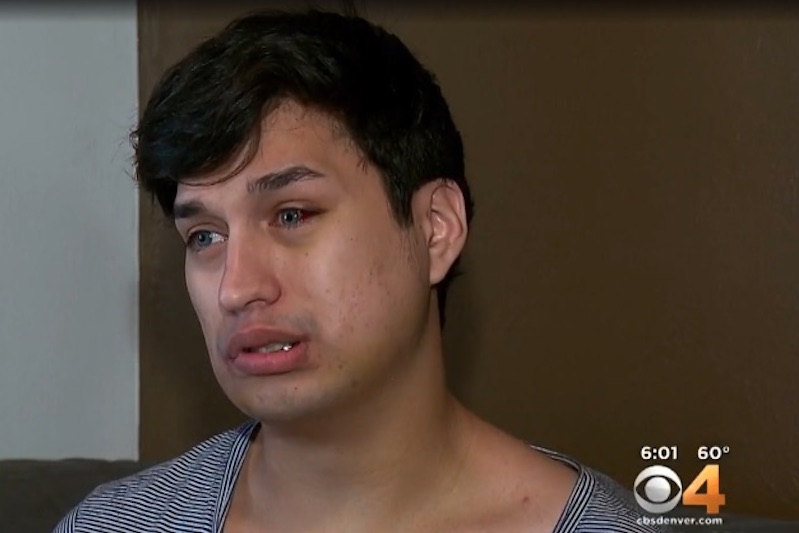 Denver Police are asking for the public’s help in identifying the suspects involved in an attack outside a downtown bar that left a transgender woman with severe injuries and her face paralyzed.

The attack took place on Sunday, April 28, around 1:20 a.m. as the victim was leaving the Tavern Lodo.

Cell phone video shows the victim, Amber Nicole, almost getting into a car, before turning back towards the bar. The attack occurs off camera, but she is later seen being helped into a car by a friend.

Amber said her friend realized they were both covered in blood because she was bleeding so much from the attack.

Her friend drove Amber to the the hospital, where she was treated for broken bones in her face and a broken jaw, which had to be wired shut. She also suffered nerve damage that left the right side of her face partially paralyzed.

Doctors say they don’t know if it will be permanent, reports Denver’s CBS 4.

Police are asking anyone with information about the attack to contact them via their Crime Stoppers hotline at 720-913-7867.

A GoFundMe page has been set up to help Amber with medical costs. Amber says she and other transgender people are just trying to live their lives, but some people can’t seem to accept their existence.

Her mother, Juls Martinez, says she’s angry that no one stepped in to stop the attack or report it to police.

“I was horrified to see my baby like that and all I could do was thank God that she was alive, but then I didn’t even know if she would wake up,” Martinez said. “Then I was just so angry because things were running through my head like how? Who? Why?! … There’s so many people who can see an incident and stop it or do something about, or make a report about it, but nobody does and I don’t understand why.”

Martinez is echoing calls from police asking anybody with information about her daughter’s attack to help with the investigation.

“Just come forward, please, say something and don’t allow these things to happen,” she said.