When is an ally not an ally? When they wave a gun at Pride. 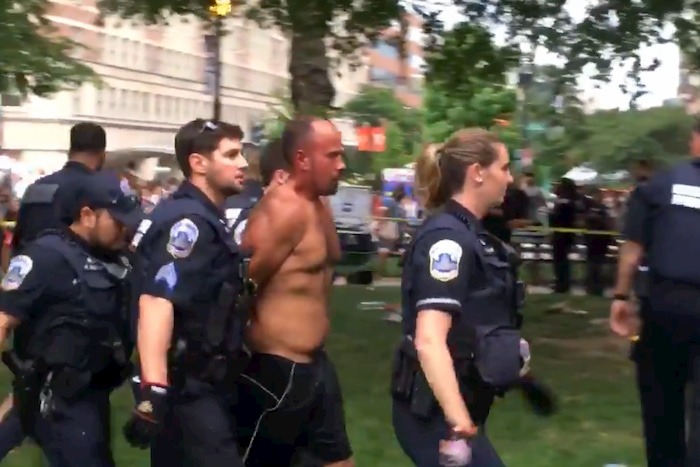 Aftabjit Singh being led away by police — Photo: ABC 7 / Twitter

Reports of an active shooter during Saturday’s Capital Pride Parade were sparked after a straight couple became embroiled in an argument with two men protesting the parade.

According to documents filed in D.C. Superior Court, 38-year-old Aftabjit Singh was arrested after drawing a BB gun on two men who were protesting the Pride parade.

The men allegedly sprayed his wife, Melissa Duffy, with mace after she bumped into them. Singh confronted the men, and was hit and maced himself. He then drew his gun on them.

The incident, which took place around 7:20 p.m. on Saturday, June 8, led to hundreds of LGBTQ people and allies fleeing down streets around Dupont Circle to escape what they feared was an active shooter.

Police responded to reports of a potential shooter, quickly swarming the scene and instructing Pride-goers, via the Capital Pride Alliance, to evacuate the area until the alleged threat was contained.

The Parade was then cancelled and attendees told to head to later Pride events, which went ahead as planned after it was confirmed that there was no active threat.

Seven people were taken to hospital with injuries sustained after trying to leave Dupont Circle, with several more treated at the scene by D.C. Fire and EMS.

Commander Guillermo Rivera, the head of MPD’s Special Operations Unit, told reporters on Saturday that there was “no evidence at all that any shots were fired,” and that the threat was contained not long after it was first reported.

According to police documents, an officer responding to to the scene arrived to find Singh at the fountain in Dupont Circle, with a partially open bag nearby.

“While canvassing the south side of the park, Officer Maio was flagged down by a concerned citizen who pointed out Suspect 1 and stated he was the individual that had a gun in his bag,” the report says. “The concerned citizen also indicated a brown bag that was laying underneath a tree.”

The officer observed what appeared to be the body and trigger of a silver handgun in the bag, which was determined to be Singh’s. Singh told the officer it was a BB gun, which was later confirmed.

While being arrested, Singh allegedly said, “I’ll be back. I’ll shoot the motherfucker.”

In police custody, he admitted to pulling the gun out and pointing it at the two men after he had been maced. He has since been charged with possession of a BB gun, and threats to do bodily harm.

As Singh was being led away by officers, Duffy, his wife, became irate and began screaming and kicking when police tried to calm her down.

She was initially charged with assaulting a police officer, though the U.S. Attorney’s Office has since dropped the charge against her.

Capital Pride says that this year’s disruption, while unfortunate, can help contingency plans and security for next year’s festivities.

“There’s definitely things for us to learn from this year as we prepare for future celebrations,” says Ashley Smith, president of the Capital Pride Alliance. “There’s things for us to be aware of, and we need to look at what we can do to ensure safety, which is a critical part of our success.”

Capital Pride 2019: The Parade may have ended abruptly, but DC’s LGBTQ community vows to keep celebrating