Though well-acted, Evan Linder's "Byhalia, Mississippi" starts with a ton of promise, but stumbles on the landing

If there is one message for the contemporary playwright, it has to be: trust in your audience. Put another way, if you are writing for people interested in seeing live theater, you have already selected for a discerning group. The people engaged with your story will be readers, thinkers, and contemplators of the human condition. Chances are, they will have a better than average attention span. Why not treat them so?

Too often, playwrights write as if audiences will throw cabbages unless they are treated to outsized plot-movers and a full cataloguing of the day’s social issues. What’s wrong with picking a theme, maybe adding a couple of subplots, and then having a good old-fashioned drill down into the human psyche?

Case in unfortunate point is Evan Linder’s Byhalia, Mississippi (★★★). As is typical, it all starts with tons of promise. Filling the stage with a house only a couple of paychecks above a semi-wide, designer Cameron Anderson sets the mood for a frank and funny drama in an unpretentious corner of hardscrabble America.

The rooms are soon filled with the lively dynamics of young marrieds Laurel and Jim, baby on the way, Laurel’s hilariously uncompromising mother Celeste, and Jim’s buddy-since-childhood, Karl. Steering clear of Roseanne territory, Linder (at least initially) gives these people enough dimension to avoid cliché. Laurel may be flopping around barefoot in trailer-trash shorts, but she works in education and seems keenly intelligent. Jim may be cart-stacking at the local Walmart, but he sees the redneck humor in his temporary lot. Celeste may deliver the laughs, but she has an edge that has likely damaged Laurel and may well hamper her future.

By the time the first scene draws to a close, these people are authentic, interesting, funny, and the stage is set for a massive tipping of the applecart (no spoilers here). Unfortunately, as scene two arrives, along with the baby, Linder seems to lose faith in his characters. Instead of letting them carry on being true to themselves, he pumps up the theatrical volume. There are fisticuffs, theatrically self-conscious fights, improbable silences, and the taking of stands, but nowhere near enough genuine grappling with the rupture in these lives. Instead of focusing on the relationships — marital, friend and parent-child — he composes situations that trigger sound and fury but not much else. The racial experiences of two African-American characters Karl and Ayesha and the religious convictions of Celeste are grafted on at nonsensical junctures.

Linder’s biggest misstep is squandering his portrait of Laurel. There is something intriguing in his suggestion that she inhabits two identities: Southern working-class at home, modestly upwardly-mobile at work. But once in the throes of raising a baby who is causing a rift in both her family and her small town, she becomes little more than a vehicle for grand ideas. She may raise questions of truth, fairness, race and a little about gender, but it all comes across as tiresome self-indulgence. And the more adamant Laurel becomes, the less sense she makes as a person. Is she educated or not? Principled, stubborn or stupid? Nothing ties her to a past or a life.

Matters aren’t helped by Linder’s injection of theatrics: her come-to-Jesus with a seriously estranged Jim in which she demands he get her water and a banana before she will explain herself, is painfully contrived. Without more, it’s hard to believe Linder meant to make her this unsympathetic.

Though she can’t get past Linder’s mission for Laurel, Caroline Neff offers a certain hard-bitten charisma as this embattled woman and admirably has no interest in being likable. But although there is a certain downhome chemistry with Jim, they don’t fight like people who have a history. Between this and Laurel’s single-minded principles, their conflict and reconciliation carry little weight.

Though his Jim has the right kind of personable warmth and his rapport with old pal Karl is credible, Jack Falahee can’t reconcile Linder’s need to make him a brawler and a thrower of baby monitors. As the affable buddy Karl, Blake Morris brings much subtlety to a thinly sketched role and could have brought some much needed emotional intimacy.

Super-memorable here are Cecelia Wingate as Celeste and Aime Donna Kelly as Ayesha, the woman whose marriage has been rocked by Laurel and her choices. Utterly inhabiting the role with gratifying commitment, Wingate is frighteningly good as a woman utterly the product of her place and time. As the accomplished but compromised Ayesha, Kelly plays it large enough to beat back Linder’s improbable encounter with the “other” woman, so bold it doesn’t matter that no one ever talks like this.

Despite a clever start and some good moments, Linder never quite trusts in his powerful ear for American life and humor. If he can kick it up a notch — or, better yet — down a notch, he has much to say on life in these complicated times.

Byhalia, Mississippi at The Kennedy Center 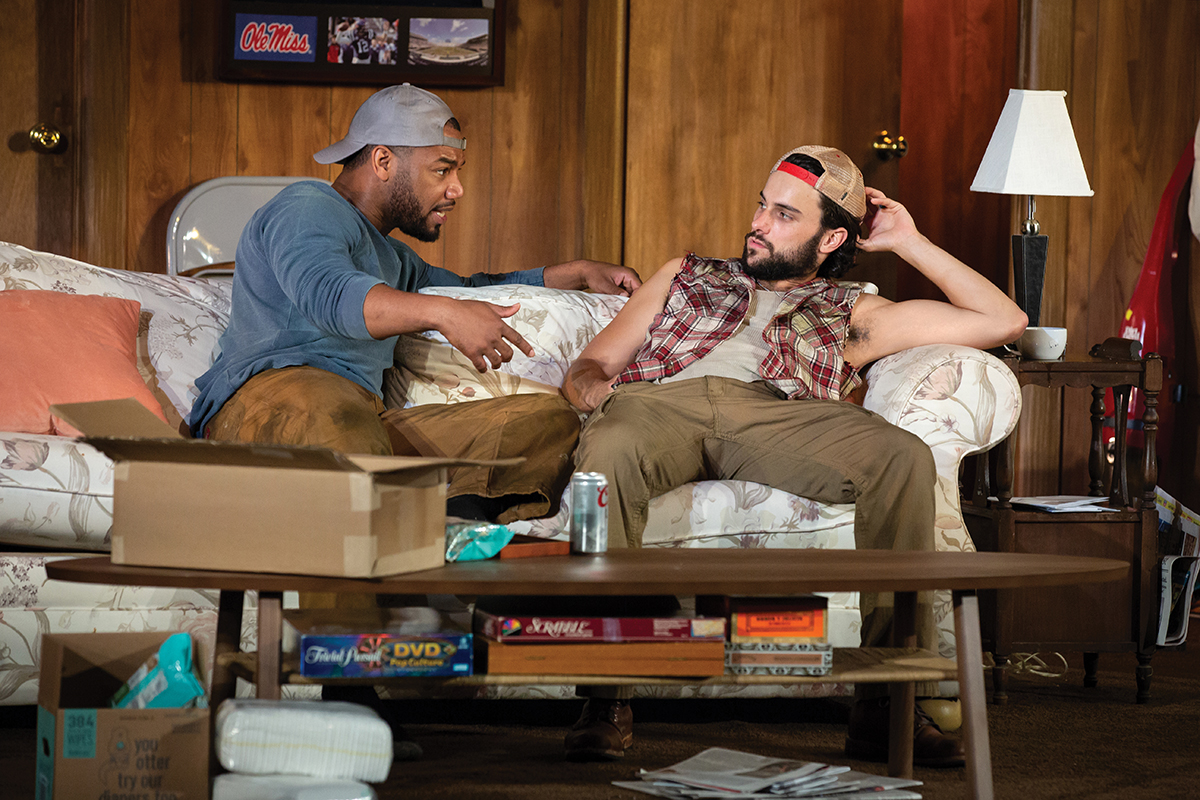