The Terminator series is finally revitalized in this invigorating, action-packed sequel to T-2

By Randy Shulman on October 31, 2019 @RandyShulman 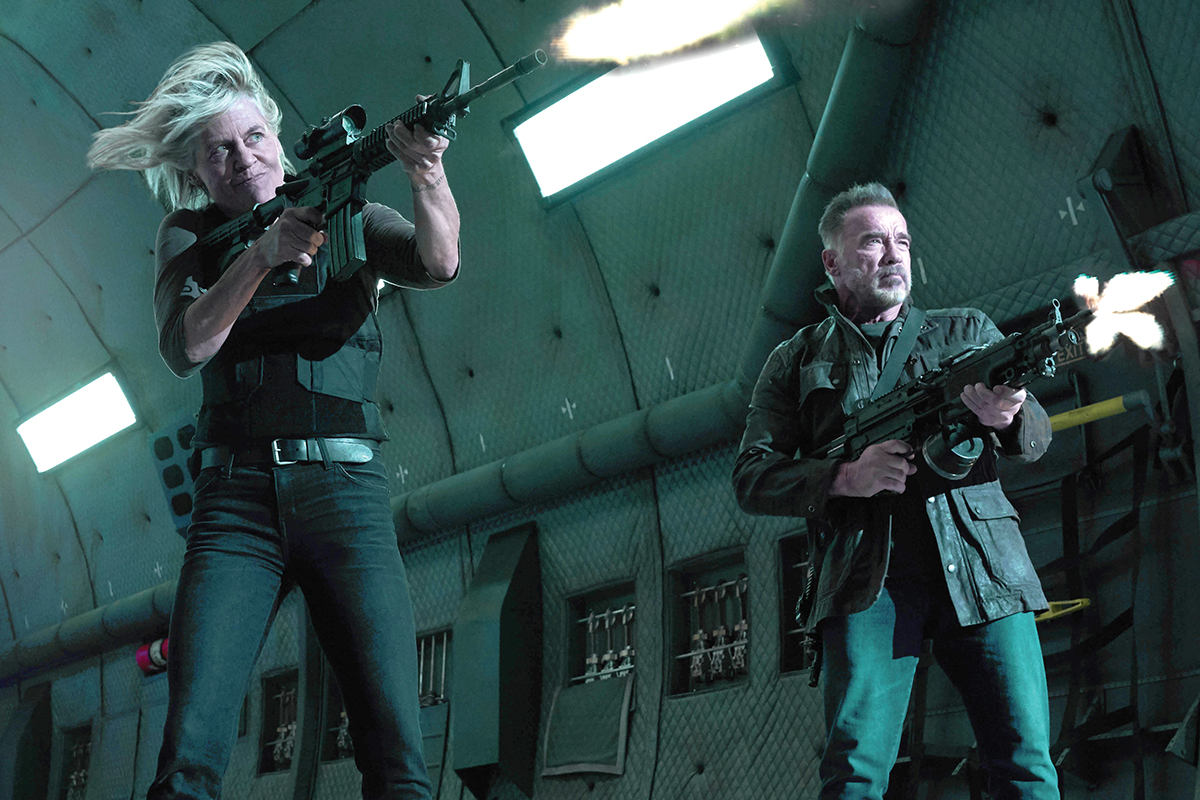 Remember “Rule No. 1” should you ever encounter a Terminator: Run. Fast. Like really, really fast.

This rule is especially important if you are confronted by a Rev 9, a particularly vicious model whose carbon-black endoskeleton is coated with a gleaming black ooze that can operate independently. They’re like two peas in a violence-inducing pod. To be honest, the Rev 9 does pretty much what the T-1000 model did, but in a much more sophisticated way and with far less reflective gleam. No need for Windex on this guy. He’s already streak-free.

In the simplest of terms, the Rev 9 (Gabriel Luna) is the bad terminator sent from the surprisingly not-too-distant future to eradicate Dani Ramos (Natalia Reyes) from existence for fairly obvious reasons. Grace (Mackenzie Davis) is the protector sent back in time to keep Dani from being sliced and diced by the single-minded Son of Cuisinart. Along the way, the pair pick up welcome assistance from Sarah Connor (Linda Hamilton), who had her own war with the machines in 1984’s The Terminator and 1991’s vastly superior (and visually groundbreaking) Terminator 2: Judgement Day. Also on hand: The T-800 (Arnold Schwarzenegger), who now goes by the name of Carl and runs a drapery business. “I’m reliable. I’m a very good listener. And I’m extremely funny,” he deadpans at one point.

This is about all I can reveal about Terminator: Dark Fate (★★★★☆) without spoiling its small yet significant pleasures. It’s a pretty straightforward movie, with a strong linear narrative, but the devil, as they say, is in the details. The storyline devised by originator James Cameron and master scribe David S. Goyer, among a few others, is unimpeachable in its elegance. It heaves the plotlines of the preceding Terminator movies into the trash, and picks up where T-2 left off, literally dispensing with the need for Terminator 3: Rise of the Machines (2003), Terminator Salvation (2009), and Terminator Genisys (2015). Good riddance. And welcome back.

Directed by Tim Miller (Deadpool), Terminator: Dark Fate is a vast, popcorn-chomping entertainment vehicle that more than delivers the goods — those goods being explosive, nail-biting, heart-pumping thrills. (Sitting through the film should qualify as a two-hour aerobic workout.) The action sequences are fast and furious showstoppers, each outdoing the next. One particularly marvel-worthy moment takes place aboard a military cargo jet and its utter insanity leaves your head giddily spinning. There are occasional breathers that allow for a surprising amount of humor, some social consciousness-raising (notably with regard to immigrants and border detainees), and explanations for “How did we get back in this position?” Cameron and Miller provide a logical purpose for the series to continue without completely rejiggering its DNA. It’s smartly done.

Both Hamilton and Schwarzenegger settle comfortably back into their roles with some noticeable alterations. Hamilton’s Connor is now a full-on badass and Schwarzenegger, realizing he’ll never be a real actor, simply leans into the cult of Arnie and has a damn good time of it. He’s never been better.

Reyes and Davis make fantastic additions, with Davis, resembling a young Robin Wright, flinging open the door to a promising career. With his intense glower, Luna makes a menacing killing machine, but even he is awarded a few light moments that render him almost likeable. You kind of wish he’d give up on his mission, crack open a Corona with an arm that could easily double as a can-opener, and shoot the breeze with the T-800 and Sarah. My Dinner with T would be a movie we’d all pay good money to see.

Randy Shulman is Metro Weekly's Publisher and Editor-in-Chief. He can be reached at rshulman@metroweekly.com.
← Previous Story Film Review: “By the Grace of God”
Next Story → Harriet Review: Cynthia Erivo’s performance towers over formulaic biopic