As we start our 26th anniversary year, we thank you for your readership, and for your support 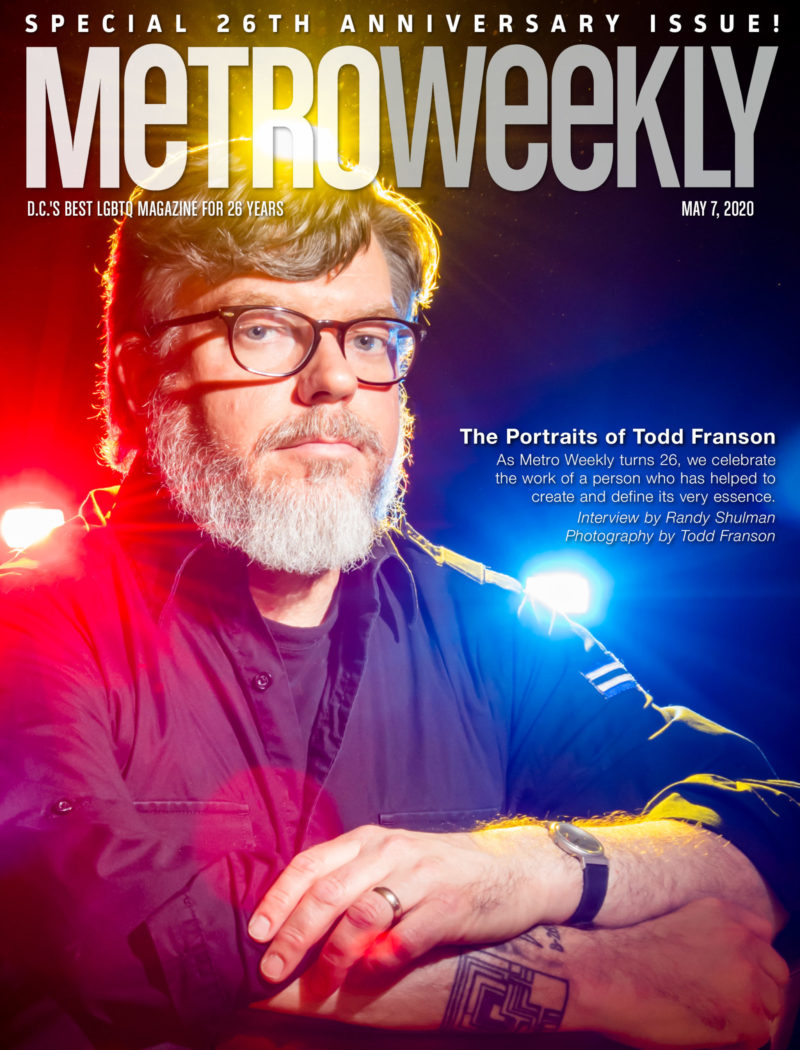 It was fate in 1993 that guided me to a party thrown by the late, gifted artist Paul Myatt. Fate continued to rear its head a year later, when the doors of a publication Paul and I both freelanced for closed, paving the way for the creation of Metro Weekly on May 5, 1994.

It was fate that, in true, piece-by-piece jigsaw fashion, brought together a talented crew — writers Sean Bugg and Kate Wingfield, designer Daryl Wakeley, photographer Annie Adjchavanich — to devise a weekly LGBTQ magazine the likes of which the city had never seen. To be sure, the early Metro Weekly was an unusual product — an offbeat hybrid of bar rag and arts and culture magazine, combining high-end, literate writing and ravishing images with shockingly graphic advertisements that even make me blush today.

And it was most certainly fate that led to my first encounter with a talented young photographer by the name of Todd Franson. Little did I know while attending Franson’s remarkable exhibit Nightlights, at the subterranean 17th Street Restaurant Trumpets, that an indelible, indestructible creative partnership would be forged and endure 26 years later. The story of Todd’s unique, lasting, and vital involvement with the magazine is the subject of this week’s 26th Anniversary issue, and his interview, which begins on page 34, illuminates his approach to photography and life without, remarkably, one mention of Duran Duran.

The interview was meant to be followed by 26 of Todd’s portraits taken over the years. After hours upon hours upon hours of deliberation, we finally threw our hands up, realized that as a digital publication we didn’t have to worry about page count, and added 100 to the 26. I hope the visual journey, which is in loose chronological order, will surprise you, bring back memories of some who have been lost, and serve as a testament to the magnificent talent of Todd Franson and his commitment to photographing the LGBTQ community in its finest light.

We could have published hundreds more, but we had to stop somewhere. Together, Todd and I have curated what we think is representative of the breadth of his portraiture for this publication, but is also representative of our mission to capture LGBTQ history, art, culture, and news, in a powerful and unique manner. We will be doling out more portraits and never-before-seen outtakes on our Instagram account throughout May. Follow us there @metroweekly.

The cover proved somewhat of a challenge, until Todd suggested that he do his own self-portrait, something he had never tried before. The results, if I say so myself, are thrilling. (Note the residual rainbow from the lights that appears directly over his head — if that’s not fate intervening, what is?)

Metro Weekly has always put an emphasis on its visuals, and Todd and I have been fortunate to work alongside some of the best photographers (Annie, Michael Wichita, Ward Morrison, Julian Vankim), illustrators (Myatt, Scott G. Brooks, Kendra Kuliga, Stuart Haggis, David Amoroso), and designers (Wakeley, Nancy Saiz, Mike Heffner, and Tony Frye). I think all in turn would agree Todd’s involvement with Metro Weekly was an instance of good fortune for them as well.

A month and a half ago, when I announced in this space that we’d be taking the print edition of Metro Weekly on hiatus for a few weeks as the pandemic played out, little did I realize weeks would stretch into months, and that now we’re looking at even more months to come. I am proud of Todd and the entire staff for making this temporary transition to digital so effortlessly. To us, the digital version is no different than the printed edition. It’s not about the vehicle, I have come to realize, it’s about the content. And we are dedicated to providing you with the highest quality, most useful content possible. (Plus you can now watch video directly in our pages! How cool is that?)

As we start our 26th anniversary year, we thank you for your readership, and for your support of us and our advertisers. We have some fun surprises in store — just wait — and are thrilled that we can continue to deliver Metro Weekly right to your phone, tablet, or desktop. (To be alerted to a new issue automatically, download the free Issuu app and follow Metro Weekly at issuu.com/metroweekly.)

As a good friend remarked to me after the first digital edition came out, “This is fantastic. It feels like the future.” If you ask me, it feels like fate.

Randy Shulman is Metro Weekly's Publisher and Editor-in-Chief. He can be reached at rshulman@metroweekly.com.
← Previous Story Hello, Metro Weekly Digital Edition! (So long, print edition… for now)
Next Story → The Magazine: Mondaire Jones