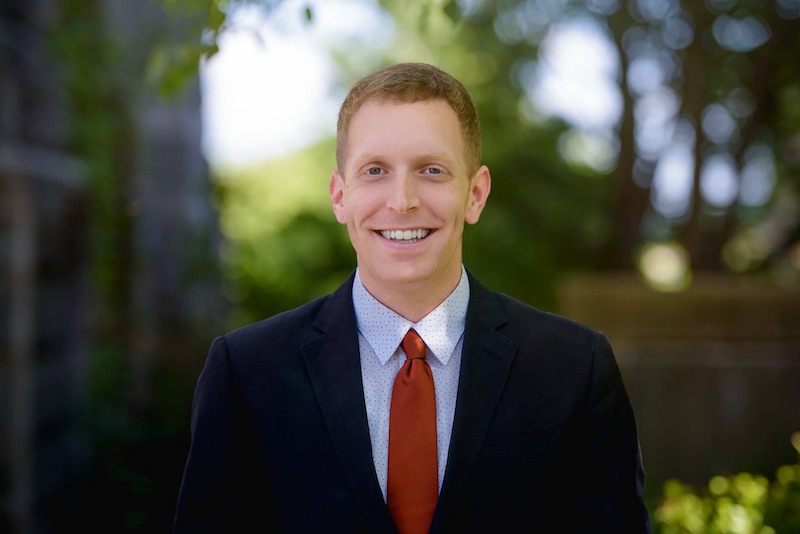 An openly gay congressional candidate has been disinvited from future events held by the University of Massachusetts College Democrats after allegations that he engaged in inappropriate sexual relations with college students, including while running for Congress.

Morse, 31, is the mayor of Holyoke, Mass., and currently the youngest openly gay mayor in the country. He is challenging Democratic incumbent Rep. Richard E. Neal for his congressional seat.

However, he has been accused of using his position as both mayor and a lecturer at UMass Amherst to engage in inappropriate behavior and sexual relationships with students, including messaging them through Grindr and using College Democrats events to meet and later message them.

Morse responded to the allegations by saying every relationship he has engaged in “has been consensual,” but noting that he has to “be cognizant of my position of power” and apologizing to “anyone I have made feel uncomfortable.”

He also suggested that the narrative against him was invoking “age-old anti-gay stereotype” and he was being “held to a different standard, one deeply connected to a history of surveilling the sex lives of people like me.”

The allegations against Morse were first published in the Daily Collegian, which received a letter from the College Democrats calling into question Morse’s alleged behavior.

The first accusation alleges that Morse, a political science lecturer at UMass Amherst, regularly matched with students on dating apps, including Tinder and Grindr, including members of the College Democrats of Massachusetts, the UMass Amherst Democrats, and other political groups.

The second accusation is that Morse used College Democrats’ events to meet college students, later adding them as to his “Close Friends” story on Instagram or sending them direct messages, which allegedly made the students “uncomfortable.”

The third accusation is that Morse violated college rules by having sexual contact with students, including at UMass Amherst, while being employed by the university.

“Alex Morse should know that as an elected official, a high-profile candidate, and a lecturer at a large public university, he holds a position of power over many young people,” the political organization’s letter read.

“Many young people around the state and around the country, especially those involved in College Democrats, view Morse as a role model, which renders it unacceptable for Morse to routinely make sexual or romantic advances, whether implicitly or explicitly.

“Even if these scenarios are mutually consensual, the pattern of Morse using his platform and taking advantage of his position of power for romantic or sexual gain, specifically toward young students, is unacceptable.”

In response, the university said it won’t hire Morse back as an adjunct professor, and will mount an investigation to determine whether he violated either university policy or Title IX laws prohibiting sex discrimination, reports The Republican, a Springfield-based newspaper. It remains unclear whether any of the students with whom Morse was involved attended classes he taught.

It also remains unclear whether Morse would be disciplined for engaging in relationships with any students who attended other institutions that are part of the Five College Consortium, a nonprofit educational corporation, of which UMass Amherst is a member.

A UMass spokesman said in a statement that consensual relationships between faculty and students “are inherently problematic because of the unequal power dynamic between the parties to the relationship, the responsibility of faculty for evaluating students’ work, the possibility that other faculty and students may be adversely affected, and because such relationships diminish the trust and respect that ordinarily characterize the faculty-student relationship and are therefore inconsistent with the educational mission of the university.”

UMass faculty are prohibited from entering into a sexual relationship with any student or post-graduate student under their supervision, the spokesman added.

The accusations come as Morse is challenging the powerful House Ways and Means Chairman, U.S. Rep. Richard Neal, in the Democratic primary, casting himself as a change agent who is more in touch with the concerns of working people and issues important the party’s progressive base, such as the Green New Deal and Medicare for All.

The primary is Sept. 1, meaning any investigation into Morse will not be completed within the three weeks before voters cast their ballots.

Morse responded to the initial accusations in a statement saying he needs to be more mindful of his own position of power. He denies that he had any inappropriate relationships with any student in his classes or under his purview.

“Growing up gay and closeted in a small city like Holyoke, I struggled with accepting my sexuality, and in high school, I had a hard time finding other openly gay students. As I’ve become more comfortable with myself and my sexuality, like any young, single, openly gay man, I have had consensual adult relationships, including some with college students,” he said.

“I want to be clear — every relationship I’ve had has been consensual. However, I also recognize that I have to be cognizant of my position of power. Navigating life as both a young gay man and an elected official can be difficult, but that doesn’t excuse poor judgment,” he added.

“That’s why I want to sincerely apologize to anyone I have made feel uncomfortable. I am committed to meeting with any person or group, including the College Dems, to answer any questions and address any concerns.”

But Morse also acknowledged that the accusations would be trumpeted by the Neal campaign, adding: “I’m sure that my opponent will be eager to twist this into something it’s not to score political points, but I would caution him against indulging in old negative stereotypes about gay men. I will not apologize for living life out of the closet, for going on dates, and having consensual conversations.”

Two Holyoke city councilors, Michael Sullivan and Linda Vacon — who has previously run for office as a Republican and who last year claimed Morse uses his sexuality to play the “victim card” — demanded that Morse resign immediately.

Meanwhile, Terence Murphy — who has previously criticized the Morse campaign’s attacks against Neal in an op-ed — said Morse should take an unpaid leave of absence as mayor while the university’s investigation remains ongoing.

But several of Morse’s defenders on social media, particularly those from the progressive wing of the Democratic Party, objected to the accusations against him, arguing that the allegations were part of a smear campaign, pointing to a $1,000 donation that the College Democrats of Massachusetts had previously accepted from Neal.

Others argued that treating consensual adult relationships with students — whom Morse claims were never enrolled in his classes or in a subordinate relationship with him — as equivalent to an affair between a superior and a subordinate distorts the relationship, infantilizes the young men with whom Morse was allegedly involved by declaring them incapable of consent, and relies on homophobic tropes inferring that any same-sex activity cannot be consensual.

The mayor’s defenders also point out that there was no power imbalance between Morse and his paramours, because that would require someone to have knowledge of Morse’s position as mayor or as a lecturer at UMass Amherst beforehand for them to feel pressured. As reported by the Boston Globe, a student who shared his story with the newspaper confirmed that he only found out about Morse’s positions of power after they had a sexual encounter, which led him to feel “uncomfortable.”

In a statement released Sunday, the College Democrats of Massachusetts said that no candidate, elected official, or staffer for either Neal or Morse had any role in the earlier letter accusing Morse of acting inappropriately.

The organization also noted that the check for the initial $1,000 donation they’d received never cleared, after which Neal sent a replacement check, with the original donation being reported as a refund to the Neal campaign.

“To suggest that our decision to send the letter to Mayor Morse was a quid pro quo with Rep. Neal, his campaign, or anyone else is untrue, disingenuous, and harmful,” the organization said, noting that it has received other donations to help support its activities from other elected Democrats and Democratic candidates for office. 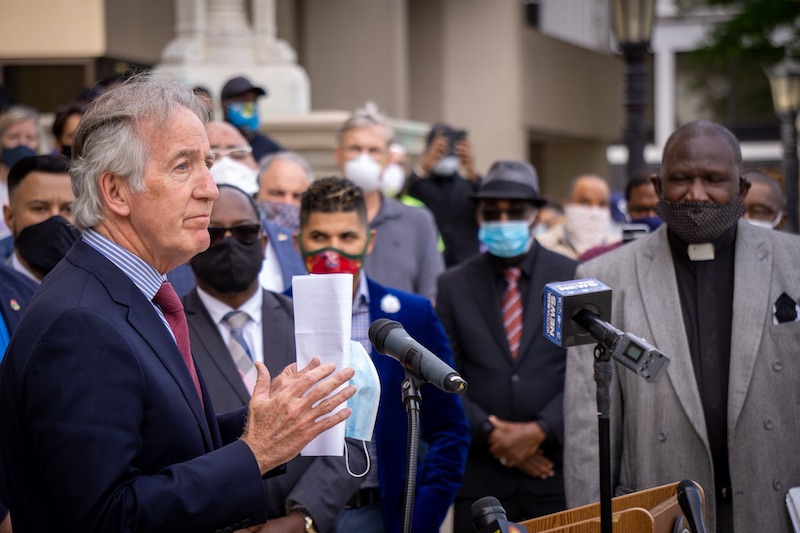 The organization also insisted it acted to protect its members who felt uncomfortable by Morse’s alleged advances.

“For the Mayor to pursue students he meets at College Democrats events is unacceptable. For an elected official who is also a lecturer at a university (a position that involves holding both academic and political power over students) to sleep with students at that university is unacceptable,” the statement read.

“In addition to being a Mayor and a lecturer, Mayor Morse is a widely-admired and well-connected gatekeeper to progressive politics in Massachusetts and nationally, which makes the task of refusing his advances fraught for college students who wish to enter progressive politics themselves,” the College Democrats added.

“Cumulatively, the Mayor’s various positions of power create a significant and undeniable power imbalance between himself and the college students he sought out after meeting the at our events. We (including those affected by his behavior) recognize that where such a lopsided power dynamic exists, consent becomes complicated.”

Morse released his own statement on Sunday, saying he would remain in the race for Congress and pushing back against allegations that he acted improperly.

“I want to be very clear about this. I have never, in my entire life, had a non-consensual sexual encounter with anyone. I have never used my position of power as Mayor and UMass lecturer for romantic or sexual gain, or to take advantage of students,” he said.

“I have never violated UMass policy. Any claim to the contrary is false,” he continued. “I continue this campaign mindful of the fact that my personal life — and my consensual sexual activity — will be subject to scrutiny and fixation that are all too familiar to members of the LGBTQ community.”

Morse added: “I say this not to shirk responsibility for having made anyone feel uncomfortable. I am simply highlighting the fact that I am being held to a different standard, one deeply connected to a history of surveilling the sex lives of people like me.”