First Look: DC’s Different Drummers is getting a makeover

Come Spring, DC's Different Drummers will be sporting a fresh new logo and a new look in high-tech uniforms 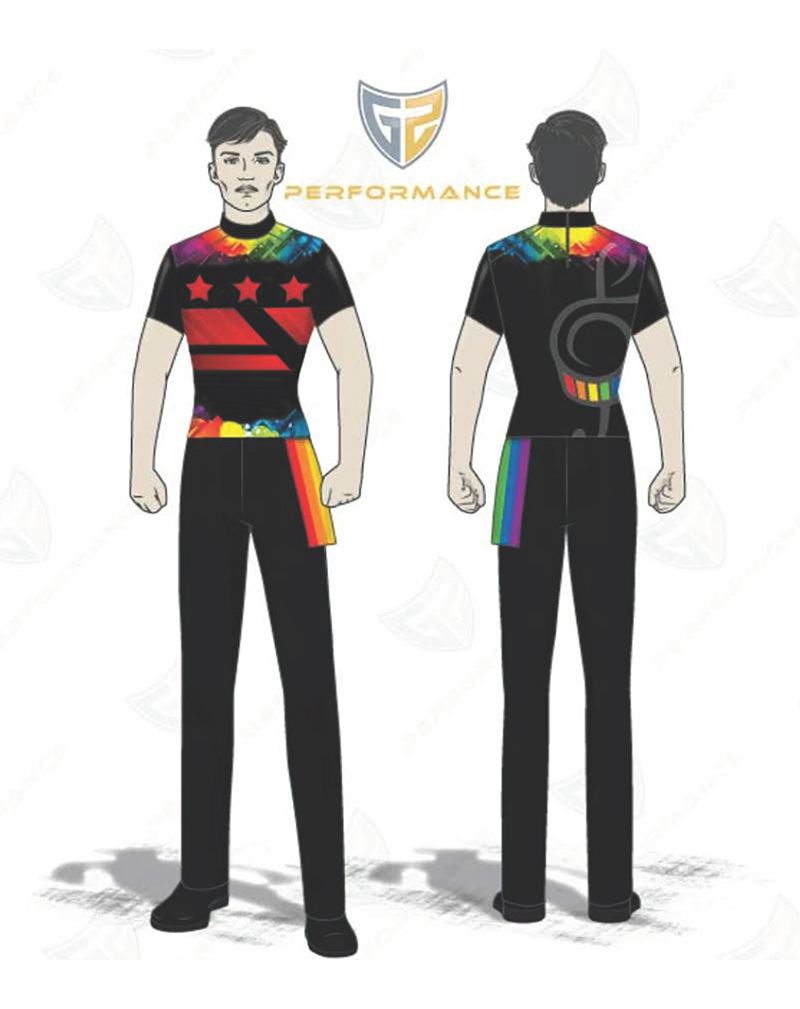 DC’s Different Drummers, the Washington area’s LGBTQ musical organization, is getting a makeover. Gone are the red-and-white collared shirts and khaki shorts that members wore as they marched in D.C. Pride Parades or gave special performances at local sporting and cultural events. Now, marchers will be clad in a black shirt and pants, with splashes of rainbow colors and a D.C. flag design on the front. The shirt’s back boasts a treble clef, a rainbow inside one of its curves.

Given the band members will be marching in Washington’s humid climate, Charles Roth, artistic marching band director for DC’s Different Drummers, notes that the fabric, provided by G2 Performance Apparel, is the result of research that seeks to make marching band uniforms durable, breathable, and lightweight. That, in turn, allows the marcher freedom of movement and prevents them from overheating.

“They would put different monitors and sensors on different people in a band, like a snare player, and see what their vital signs were as they were performing. The results showed that they were doing a lot of cardio work,” Roth explains. “There’s evidence brought forth from that research showing that marching band members are quite the athletes, and G2 Performance used that data to figure out how to make the uniforms more comfortable and avoid heat exhaustion.”

Roth adds that the black undertone of the uniform makes the other colors in the uniform “pop” and is less resistant to fading or staining than lighter-colored materials.

“You’ll notice that if you have uniforms of a lighter fabric, that they’ve become a little bit more difficult to sustain,” he says. “You typically see in the marching band world, a number of different organizations or high schools or colleges, go with a darker underlying cover.”

In addition to the color and more intricate design, each individual band member will have the opportunity to express their own unique identity through a sash flag on their left hip.

“We are allowing each member to choose any LGBTQIA-identifying flag that fits their personality,” says Roth, noting that it’s a subtle break from the rigid individuality usually imposed on marching bands. “It could be a trans flag, a nonbinary flag, a Pride flag, a bear flag, anything that falls under that umbrella.”

The new uniform design, including the sash flag, was developed with the input of the group members as part of a larger rebranding effort undertaken by the board of directors.

Meredith Carpenter, president of the DCDD board, says the logo for decades has been based around the “lambda man” symbol, consisting of the greek letter lambda, with a drawn-on head and two circles that look like marching band drums. Many younger members of the group did not recognize lambda as an LGBTQ-specific symbol. That, coupled with the lack of rainbow colors in the logo, led the board to push for a newer, more modern approach.

The rebranding took a year-and-a-half, and was undertaken by an intergenerational, cross-sectional group of band members who sought input from their fellow musicians through surveys or open forums and tried to incorporate that feedback.

The rebranding, as well as the new uniforms, were expected to be rolled out this past summer, but things were complicated by the COVID-19 outbreak. The group has been unable to perform since March.

“We are following all of D.C. and the CDC guidelines, all regional and national guidelines, and just waiting until things are safe,” says Carpenter. “We’ve started another committee that is putting some guidelines together, and have reached out to a number of medical and public health professionals to use their expertise to help guide us.

“We are not rushing into getting back together in any physical, in-person kind of way. I know that the percussionists may have a distant outdoor event with groups for Capital Pride, but they’ll be in masks, outdoors. But in terms of our traditional ways of interacting, we’re watching and waiting to see how things are going to go. Most of our members want to get together and see each other, but they’re not interested in pushing the boundaries of what COVID can do.”

While COVID-19 has disrupted the group’s performance schedule for 2020, Roth is hoping to begin performing, and to roll out the new uniforms, sometime in the spring of 2021 — preferably in time for D.C.’s annual Cherry Blossom Parade and Festival.

“We’re not sure what the future is going to bring,” he says. “We’re keeping it a little bit loose in terms of the time frame. We’ll take it week by week and month by month, and hopefully we’ll soon be able to perform again.”

Want to own the DC Eagle? Place your bid.

John Riley is the local news reporter for Metro Weekly. He can be reached at jriley@metroweekly.com
← Previous Story Whitman-Walker’s “Walk to End HIV” to take place virtually on Oct. 24
Next Story → Want to own the DC Eagle? Place your bid.