From an LGBTQ awards show to escaping down Woolly Mammoth's rabbit hole, here are our editor-selected picks for your week

Welcome to the Blumhouse

The first two films, which released earlier this week, are Black Box, starring Mamoudou Athie and Phylicia Rashad, in which a single father who lost both his wife and his memory in a car accident opts to undergo agonizing experimental treatment that causes him to question who he really is, and The Lie, which stars Mireille Enos and Peter Sarsgaard as parents forced to do the unthinkable and help their daughter (Joe King) after she confesses to impulsively killing her best friend.

Releasing on Tuesday, Oct. 13 are Evil Eye, based on Madhuri Shekar’s audio play about a seemingly perfect romance that turns into a nightmare when a mother (Sarita Choudhury) becomes convinced her daughter’s new boyfriend has a dark connection to her own past, and Nocturne, a supernatural horror from Zu Quirke set in an elite arts academy, where timid music student Juliet (Sydney Sweeney) begins to outshine her more accomplished and outgoing twin sister (Madison Iseman) after discovering a mysterious notebook belonging to a recently deceased classmate. All of the films will be available to stream on Amazon Prime Video. For more information, visit www.primevideo.com. —Rhuaridh Marr 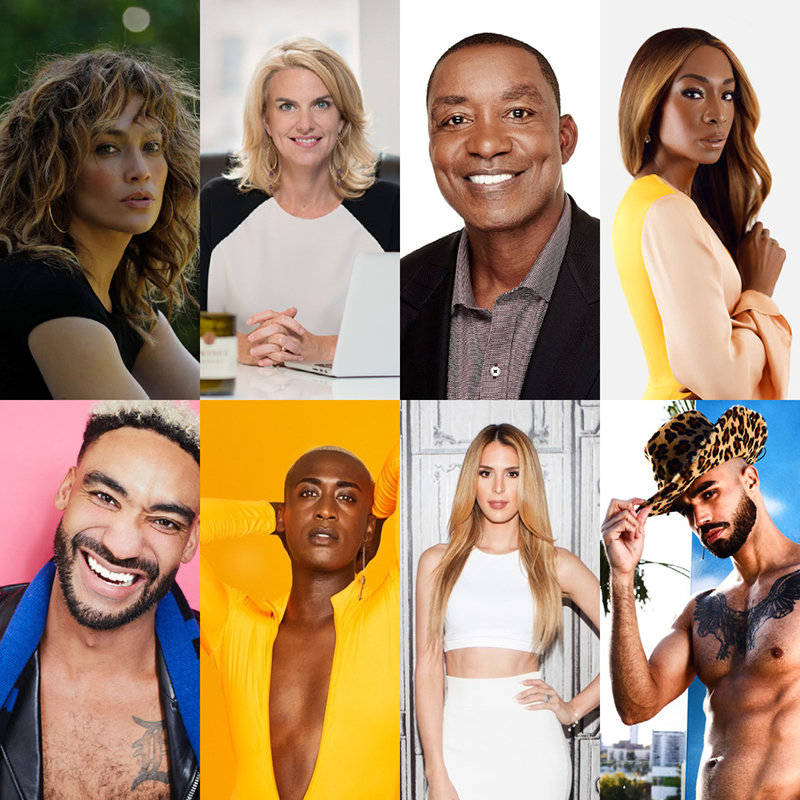 Jennifer Lopez, Angelica Ross, Carmen Carrera, Isaiah Thomas, and GLAAD’s Sarah Kate Ellis are among those set to appear at QueerX Live!, an awards show presented by Revry, “the first LGBTQ+ virtual cable TV network.” Marking National Coming Out Day this Sunday, Oct. 11, starting at 8 p.m., the program will include the Revry Visibility Awards, viewer-selected winners in the QueerX film festival competition, special musical performances by Debby Holiday, Vincint, and Rob.B, plus a performance by House of Balmain, winners of the ballroom competition on HBO Max’s Legendary.

Look for Revry in all major app stores and on mainstream platforms including Comcast Xfinity X1, Apple TV, and the Roku Channel. Visit www.Revry.tv or www.queerx.com. 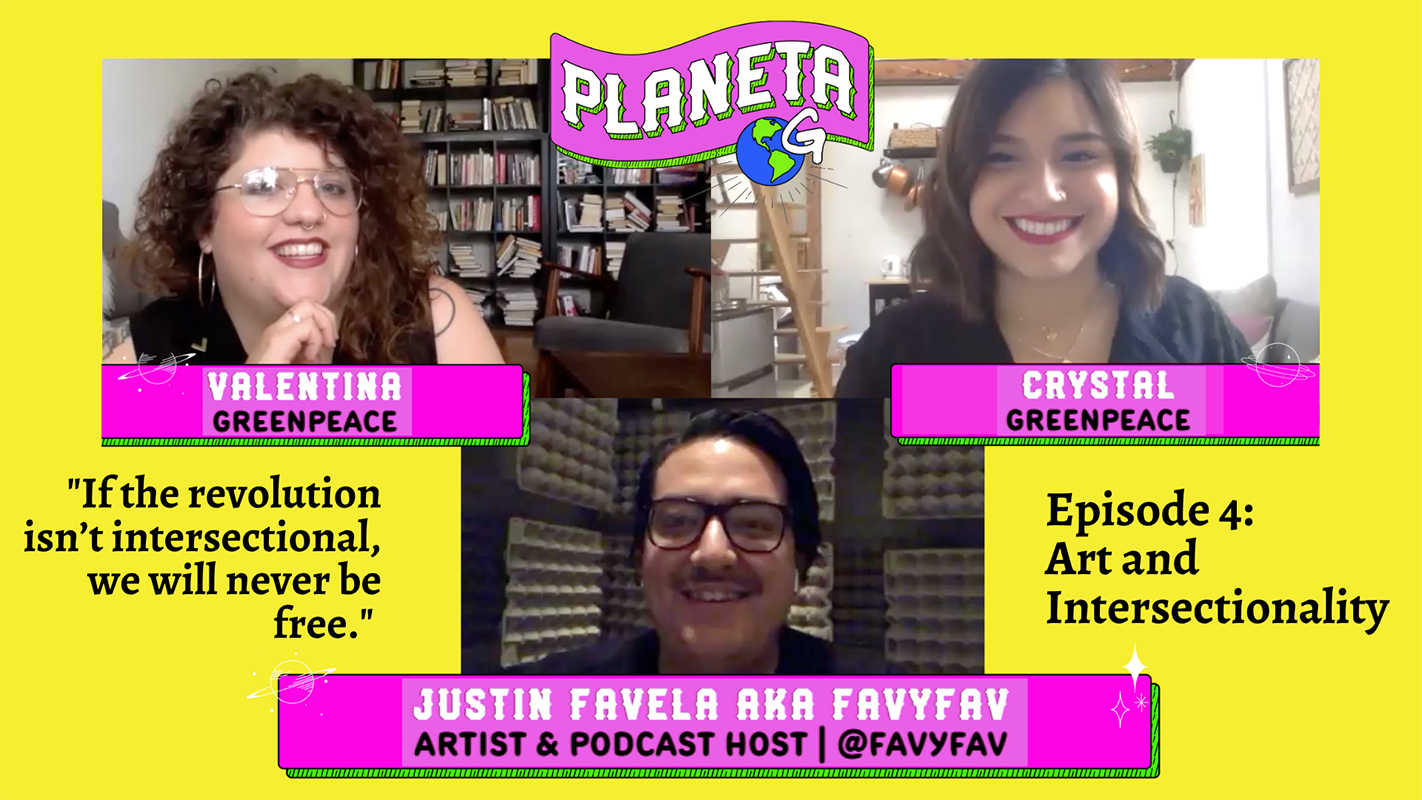 Crystal Mojica and fellow Greenpeace USA communications specialist Valentina Stack are the co-hosts of a recently launched bi-weekly web series from the environmental organization that aims to engage Latinx audiences by demystifying environmental topics and boosting Latinx voices within the environmental movement. “It’s no coincidence that Latinxs, particularly Latinxs of color, are disproportionately impacted by the climate crisis. We’re often not given the same access to adequate healthcare, education, and housing as our white counterparts,” says Mojica. “As a Brown, queer environmentalist, I hope Planeta G will provide the Latinx community a space to feel seen and heard.”

Jamie Margolin, a queer Colombian-American youth climate activist and author of Youth to Power: Your Voice and How to Use It, was featured in an early episode entitled “I am the gay cousin” and focused on the importance of amplifying LGBTQ and minority voices leading today’s climate movement. Meanwhile, Colombian actress and activist Carolina Guerra joined for an episode last month titled “10 Reasons Latinxs Should Vote This Election,” which noted that “Latinxs hold the key to this election of a lifetime.” Last week, the series celebrated World Vegetarian Day by showing “How to Make Vegan Empanadas that Will Fool Your Latinx Mom,” as cooked up by Destiny DeJesus from Veggie Mijas, a nationwide BIPOC collective passionate about food justice and accessibility, plus a report about how the meat and dairy industries are fueling the climate crisis from Greenpeace Mexico Food and Agriculture Campaigner Nancy Viridiana Lázaro Lembrino. Episodes, varying in length from 10 to 20 minutes, are accessible to English- and Spanish-speaking audiences and can be streamed from @GreenpeaceUSA on Instagram and YouTube. Visit www.greenpeace.org. 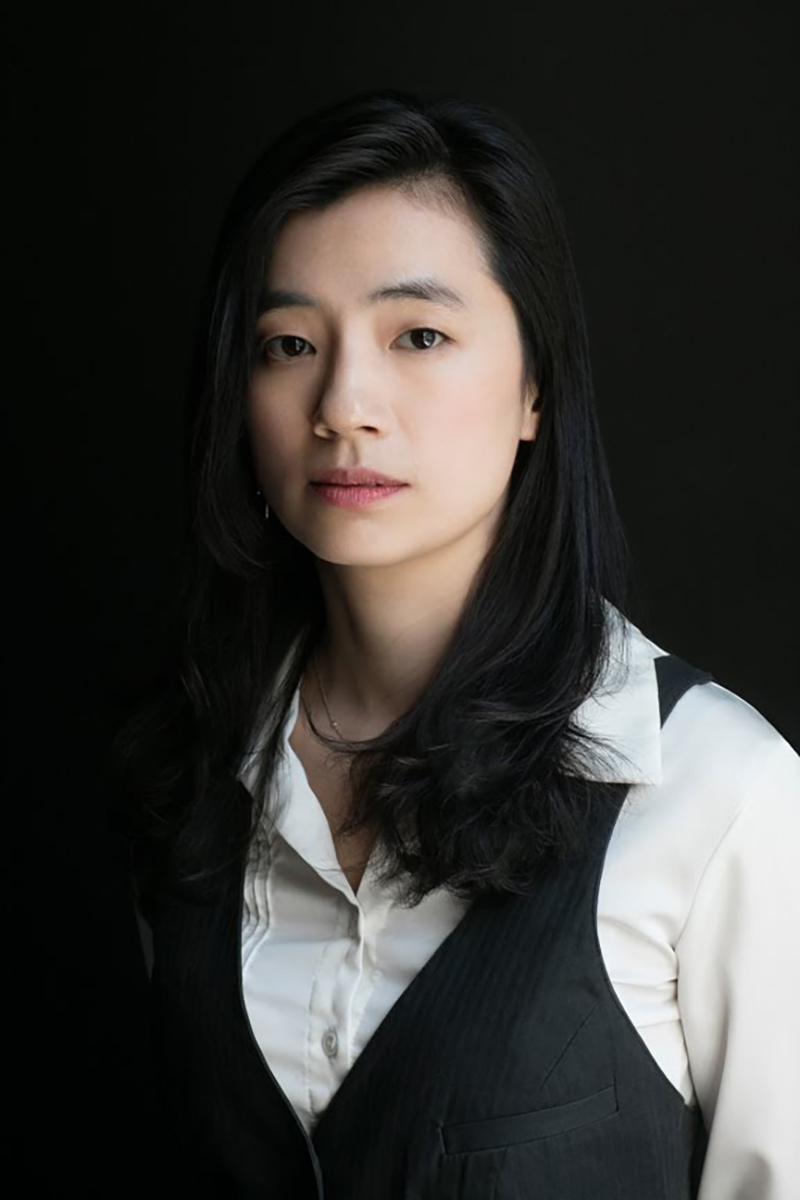 Escape down the rabbit hole of an automated telephone menu into a world of immersive audio dramas with Woolly Mammoth Theatre Company’s first offering in its new digital season, a collaboration with the Telephonic Literary Union. A parody of a customer service hotline, Human Resources plays out entirely on one’s cell phone as a choose-your-own-adventure type of experience through a company’s phone tree, allowing patrons to call back as many times as they like to explore all of the available recordings. As one recording wryly puts it: “There are so many lonely people, we are sorry to hear you are one of them. This can’t be helping.”

“To file a claim or plan your escape, dial 1-800-804-1573,” reads the press release — but first, one must purchase tickets, priced at $7 and redeemable over any four-day period, Thursday through Sunday, starting Oct. 8 and ending Sunday, Oct. 25. Visit www.woollymammoth.net. 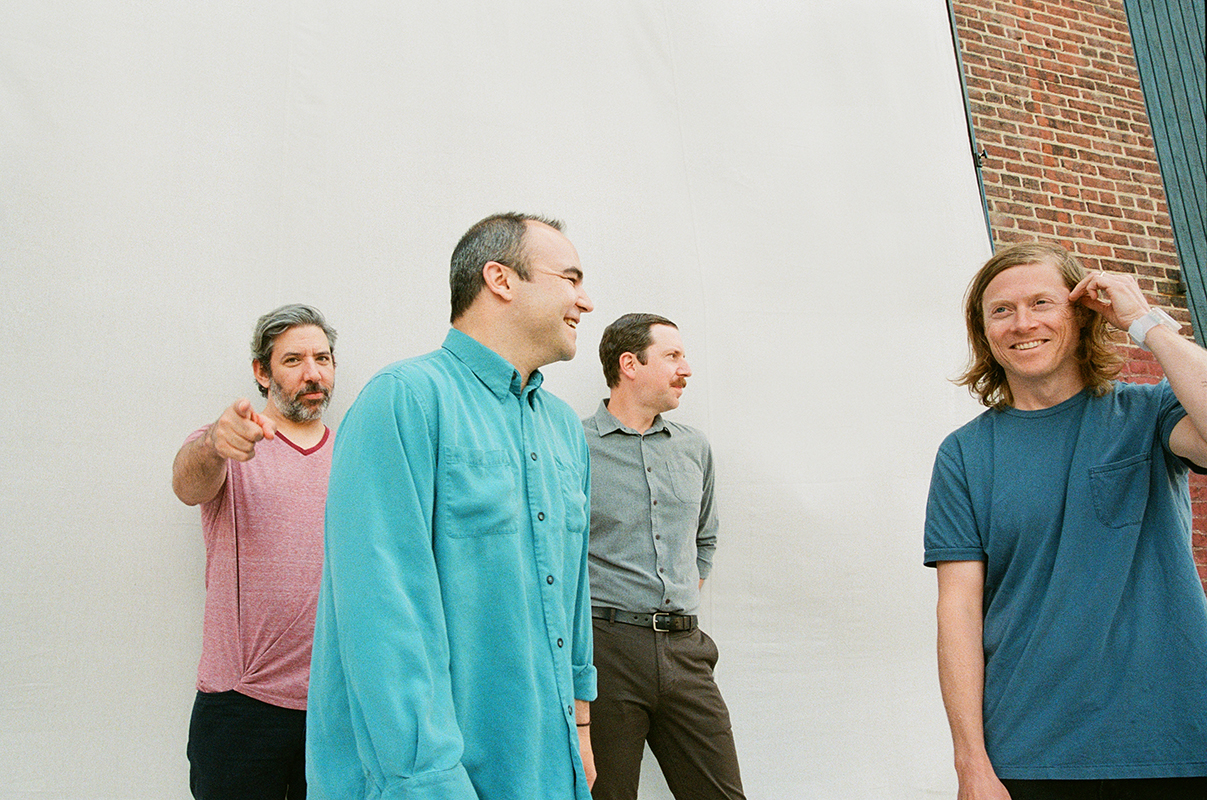 The Baltimore electro-indie act Future Islands rose to national fame with a performance on David Letterman in 2014, when lead singer Samuel T. Herring began beating his chest, punching the air and dropping to his knees, belting out the lyrics to “Seasons.” Herring’s bombastic performance resonated on TV just as it does live — with Consequence of Sound referring to them as “one of the best live bands around.” Herring’s gruff, idiosyncratic voice is what gives Future Islands its sense of immediacy and rawness, as he shouts and bellows one minute and quavers over some tearful realization the next.

This Friday, Oct. 9, at 10 p.m. the band — also featuring keyboardist Gerrit Welmers, guitarist William Cashion, and drummer Michael Lowry — will perform a livestream concert from its Baltimore base as a special party for its new album As Long As You Are, released that day. Led by previously released singles “For Sure” and “Thrill,” the new set is described in a press release from its label 4AD as another dose of new-wave synth-pop “full of bright melodies and heavenly choruses…as euphoric and uninhibitedly joyful as anything the band has done in their 14-year career.” Tickets are $15 plus service fees. Visit www.futureislands.com. 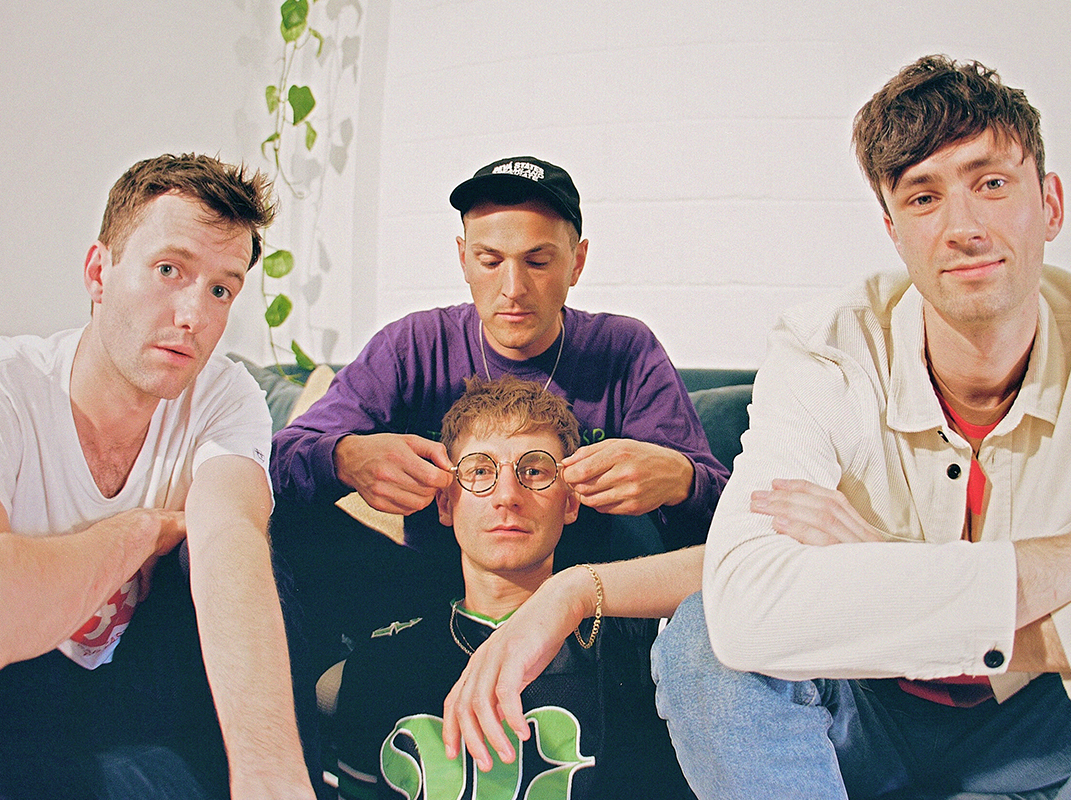 Over the summer this 10-year-old psychedelic pop band from the U.K. scored major success with the release of its third set Dreamland. Comprised of four white guys who grew up as friends in Oxford, Glass Animals notably delayed the new album’s release by one month after the groundswell of Black Lives Matter-related protests in the U.S. because, as a lengthy post to the band’s Instagram put it, the “fight for civil rights is so much bigger and more important than any single piece of music.”

Led by the singles “Tokyo Drifting” and “Your Love (Déjà Vu)” — both bona fide chart hits in the U.S. — Dreamland would go on to debut near the top of both the U.K. chart — with only Taylor Swift’s Folklore standing in the way of No. 1 — and the Billboard 200 in the U.S., where a No. 7 debut made it the highest-charting set from a British Alternative Band since the last three albums from The 1975.

Next week, Glass Animals will offer a one-time-only virtual live show that also doubles as the first time the band has been able to properly celebrate the release of Dreamland. “Live in The Internet” will feature a full band performance, special guests, and “creative fan interaction.” “The Internet is good for interacting in a different way, [and] you can do things on the Internet that you can’t do in real life,” says the band’s lead vocalist and guitarist Dave Bayley. “We’re going to try to do something with that in mind, instead of just performing live to a totally empty room.”

Thursday, Oct. 15, at 8 p.m. Tickets are $17, or $32 for a VIP package including a concert poster. Visit www.opensource.glassanimals.com. 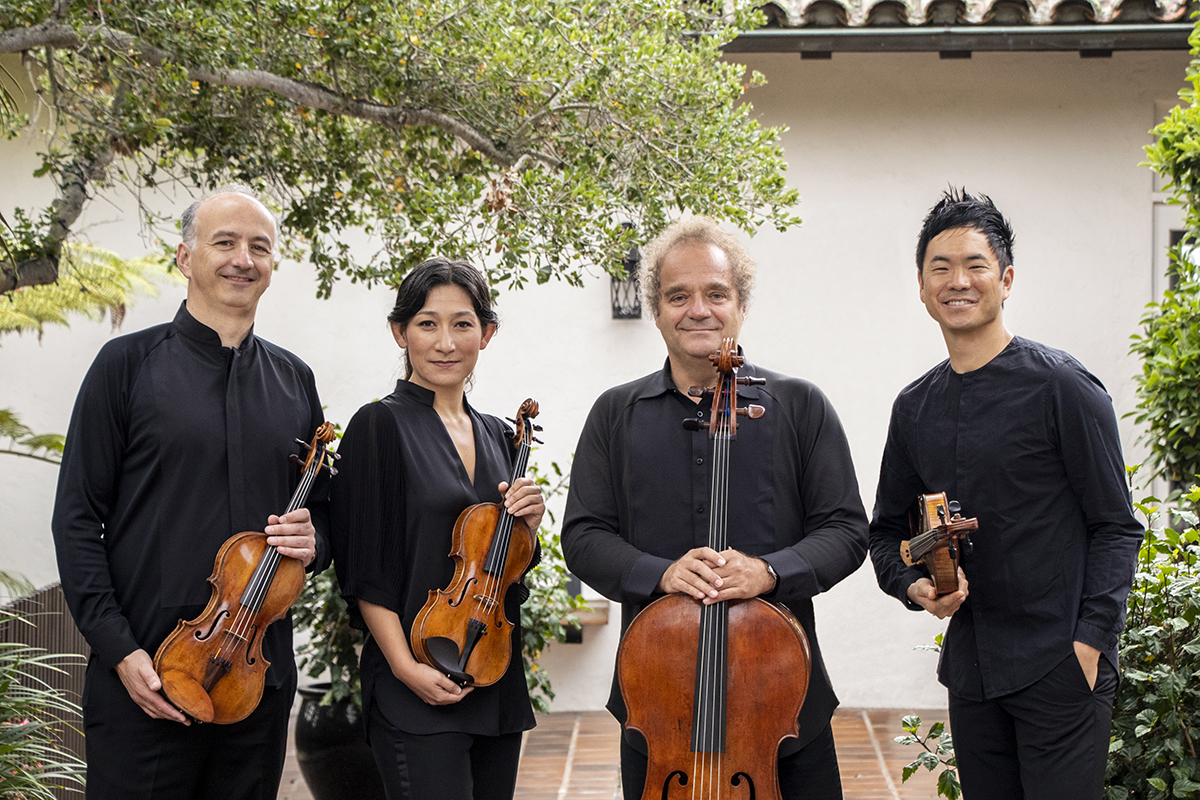 Billed as “Baltimore’s premier presenter of chamber music ensembles and solo recitalists,” the Shriver Hall Concert Series has updated its fall programming to feature three virtual concerts, each followed by Q&A sessions with the artists. The series launches this Sunday, Oct. 11, at 5:30 p.m., with an hour-long performance of the Takács Quartet, recorded at the Chautauqua Auditorium in the quartet’s home of Boulder, Colo. Movements from string quartets by Mozart, Debussy, and Bartók, and Coleridge-Taylor’s Five Fantasiestücke will be performed by the ensemble, in a concert marking the debut of new member violist Richard O’Neill.

Next month — Sunday, Nov. 8 — the Shriver Hall series continues with a special collaboration between renowned pianists Garrick Ohlsson and Kirill Gerstein and recorded from the San Francisco Conservatory. The recital will feature piano duos, including Busoni’s rarely heard Fantasia contrappuntistica as well as Rachmaninoff’s Symphonic Dances and Ravel’s La valse. 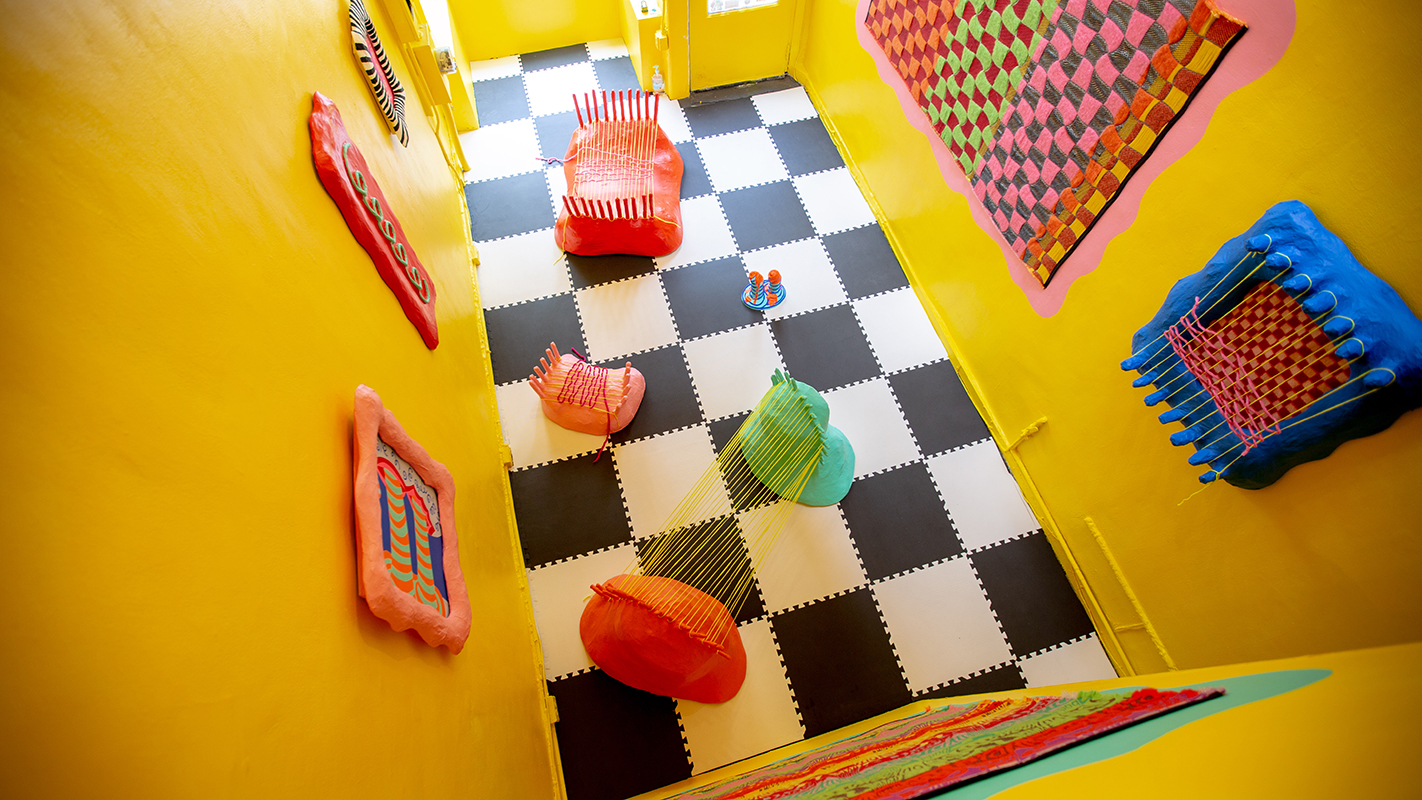 Transformer, Logan Circle’s avant-garde boutique art gallery, offers an artistic spin on the concept of window shopping in the age of COVID-19. Thread-based artworks from two emerging queer artists are prominently displayed through site-specific, mixed-media installations in two storefront windows. Zoe Schlacter and André Terrel Jackson are interdisciplinary artists/craftsmakers who use materials more likely found in a hardware store or a sex shop than a fine art supply store, in ways that “speaks to the resourcefulness of marganalized communities” and ultimately “queer[s] the way art is made and displayed,” according to the exhibition press release.

Visible like a diorama through Transormer’s P Street storefront (1404 P St. NW) is Zoe Schlacter’s Darn, an installation of loom and paper mâché sculptures and fabric paintings made from everyday craft materials for a reimagining of traditional textile mechanisms that “celebrates the queer, creative impulse.” On display through Nov. 14. Meanwhile, two blocks up 14th Street in the Community Window of The Corner at Whitman-Walker (1377 R St. NW) is Crowns, an installation by André Terrel Jackson celebrating Black creativity, femme energy, gender nonconformity, and body positivity. Surrounding a nearly life-sized, nude self-portrait, Jackson has created “a royal court of crowns fit for queens,” a triptych of hand-crochet headpieces inspired by Nina Simone, Venus and Serena Williams, and Alice Walker. On display through Oct. 24. Visit www.transformerdc.org.

Doug Rule covers the arts, theater, music, food, nightlife and culture as contributing editor for Metro Weekly. Follow him on Twitter @ruleonwriting.
← Previous Story 8 Things to Do This Week in DC (and Beyond)