A fire chief in Lewes, Del., has been slammed after posting an anti-gay slur on his social media while attending a drag show at a Rehoboth Beach gay bar.

Bill Henry Buckaloo, fire chief at the Lewes Fire Department, shared a since-deleted Facebook post showing him at Blue Moon, a gay bar and restaurant in Rehoboth, on Sunday, Nov. 15. 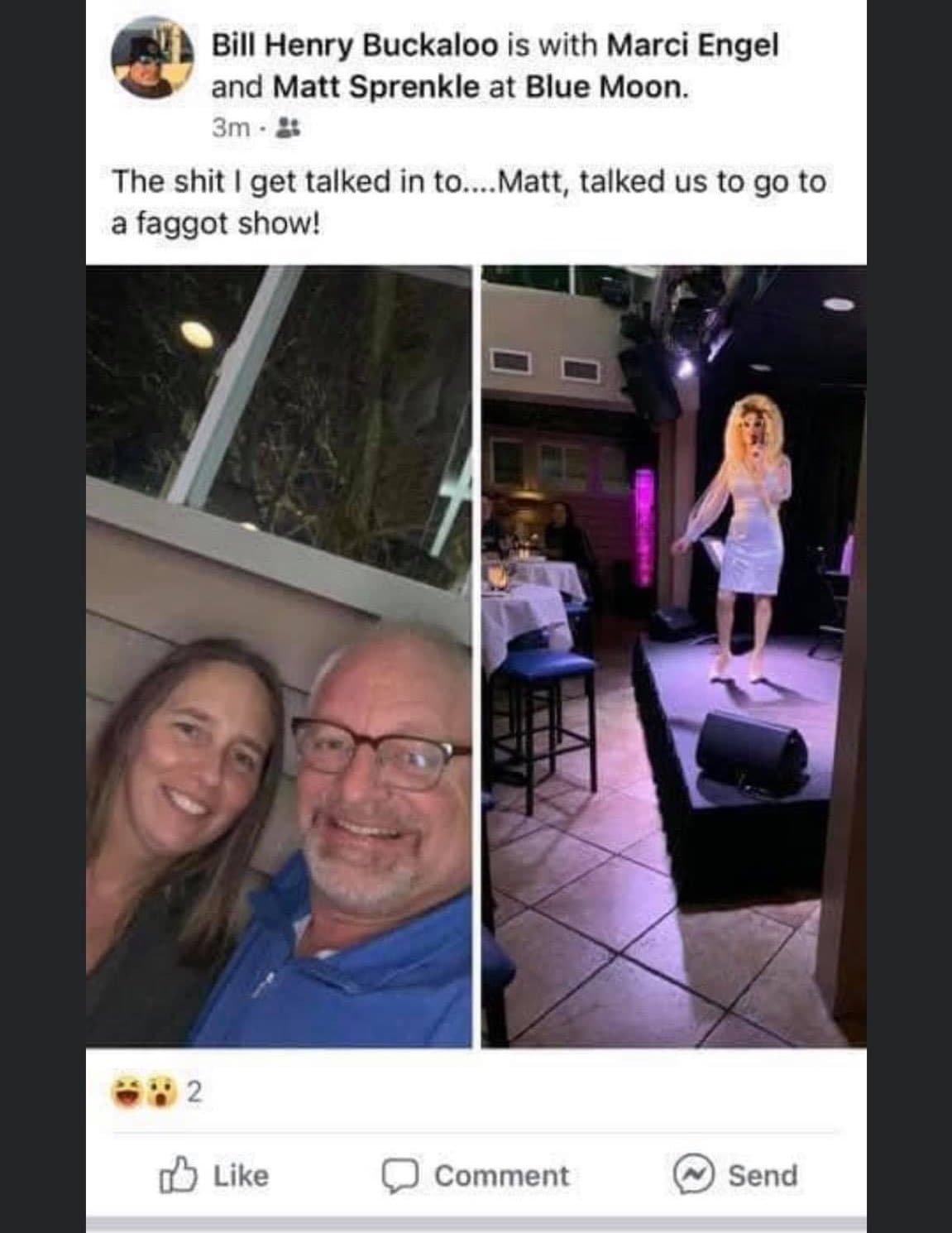 The post was widely shared on social media, despite Buckaloo’s attempts to erase it, and was eventually seen by Magnolia Applebottom, the drag queen hosting the show that Buckaloo attended.

Applebottom responded on her Instagram, calling it a “sad turn of events.”

“The @lewes_fire chief thought it was ok to go to a gay owned and operated establishment… and go to a show hosted and produced by a award winning gay entertainer and use that F word on social media,” she wrote. “Your job is to protect the people in our community not bring us down. Do better!!! Be better!!! And we recognize your inappropriate behavior.”

In an Instagram story, she added: “Mr. Fire Chief of Lewes thinks it’s still appropriate to use that word while in a very open and accepting community. This is absolutely disgusting. Unacceptable. Do better!”

The Lewes Fire Department responded Monday by suspending Buckaloo and removing him as fire chief, the Cape Gazette reports.

A spokesperson for the fire department said that their disciplinary committee would review Buckaloo’s actions, adding, “While he was not representing the department at the time, it obviously reflects back on the department and the town itself. We do not tolerate this.”

Lewes Mayor Ted Becker called Buckaloo’s post an “intolerable message,” and said the city has had “a longterm relationship with the department and it’s generally been positive.”

CAMP Rehoboth, a nonprofit that works to make Rehoboth Beach more LGBTQ-inclusive, posted a statement to Facebook saying they “appreciate the quick response from the Lewes Fire Department and will continue to work with them on this matter and on rebuilding trust in our community.”

The Lewes Fire Department spokesperson told the Cape Gazette that the department has a social media policy, and employees are provided with harassment training.

Buckaloo responded to the controversy by posting an apology to Facebook on Monday, calling his use of “faggot” an “inappropriate comment,” and saying he wanted to “sincerely apologize for my distasteful choice of words.”

“I definitely displayed a lack of good character and judgment,” he wrote. “I offended a lot of people including myself. I have no excuse whatsoever. I am truly sorry for all the harm I have caused.”

A Massachusetts gay couple has shared their surprise after learning the identity of an anonymous person who repeatedly harassed them with anti-gay mail.

Married couple Byron Furze and LeeMichael McLean told ABC affiliate WCVB that they have been receiving the homophobic mail at their Milton, Mass., home for five years, with no hints as to who was sending it.

The harassment took the form of magazine and newspaper subscriptions, with the name of the subscription customized to include homophobic slurs or innuendo.

“It was upsetting and we didn’t know when it was going to stop, or if it would advance to something more,” McLean told WCVB. “And it was an annoyance because I had to follow up on all of them.”