Little Mix has a discography filled with some of the most memorable girl group pop ever released. But what's the best?

Little Mix has concluded their final tour, which means that as of now, they’re officially on hiatus.

The three remaining members (Jesy Nelson left the band a year and a half ago) are all set to embark on solo careers in music, TV, fashion and more, but they’re not starting from scratch. They all have huge discographies filled with smashes, No. 1s, platinum hits, and some of the most memorable girl group pop ever released.

But what’s the best?

Compiling lists like this is always subjective, and fans in the U.K. may have a different opinion than an American listener, and taste varies from person to person.

This ranking is simply one person’s choices, but it does include many of Little Mix’s biggest, best-performing, and most beloved singles. So, while the mourning period continues, it’s time to press play and listen to (some) of the girl group’s best hits.

Here are Little Mix’s 10 best songs, ranked alphabetically (and not from best to worst).

The lead single from their third album Get Weird, “Black Magic” returned Little Mix to the top of the songs chart in the U.K. Their second full-length Salute hadn’t been quite as successful as its predecessor, but the girl group was able to quickly rebound with the insanely catchy tune. It became their third No. 1 in their home country, and their first to hold atop the tally for more than a single week.

While the world might not have known it at the time, Confetti ended up being Little Mix’s last proper album, and they did not disappoint when they released the hit-laden project. The group introduced the effort with the single “Break Up Song,” which was only chosen as the lead single at the very last minute, because the members felt it was truly special…and it was.

After they finished wrapping the promotion surrounding their final traditional studio album Confetti with the title track, Little Mix didn’t exactly take things easy. The band dropped several collaborations, two of which are featured on this list. Of the pair, “Heartbreak Anthem” may be the bigger and better, as it was crafted specifically to be performed in arenas. It’s not just another dance-pop smash, but a proper anthem, as its title suggests. Also, combining the girl group with DJ David Guetta and the electro production group Galantis was truly inspired.

English pop singer Anne-Marie waited four years in between her two albums, but when she finally shared Therapy, fans were thrilled to hear its latest single. “Kiss My (Uh-Oh)” featured Little Mix, and it heavily interpolated Lumidee’s breakout smash “Never Leave You (Uh Oooh, Uh Oooh),” which was initially released in 2003. Some fans recognized the melody, and loved the collab even more for its use, while others didn’t know it, so they enjoyed it simply because it’s great.

“No Time for Tears” with Nathan Dawe

In between doling out singles from Confetti, Little Mix found the time to work with rising English DJ and producer Nathan Dawe. They collaborated on the single “No Time for Tears,” which was immediately singled out as a dance floor-ready giant. It’s noted as the last track they released as a quartet, as Jesy Nelson departed the band shortly thereafter.

Glory Days wasn’t just another album for Little Mix, it was an enormously successful era. It remains the band’s most-certified release, as it has already been named a quadruple platinum project for the girl group, and it lived on the U.K. chart for longer than most full-lengths thanks to its incredibly stable and successful singles. The last of the promo cuts was “Power,” a high-octane call for female supremacy. Stormzy’s presence is an excellent addition, and even though it’s half a decade old, it feels fresh and new to this day.

“Shout Out to My Ex”

“Power” ended the Glory Days era brilliantly, but the album was introduced with the exceptional bit of pop perfection that is “Shout Out to My Ex.” The title’s lead single is yet another example of the girl power Little Mix brought to everything they did, and it is also one of the best tracks of the past decade that can help anyone get over that love that left too soon. It’s impossible not to sing along to this one.

Little Mix’s last No. 1 single in their homeland of the U.K., “Sweet Melody” blends the girl group-style pop the band quickly became known for with reggaeton sounds. The tune served as the third promo cut from Confetti, and it was yet another tune that focused on a cheating ex that the women were happy to do away with.

Yet another Glory Days single, “Touch” is like catnip to gays in clubs. The moment that first word is sung, it’s clear that it is on. The colorful video is simple enough, but the music takes it to another level. To be perfectly honest, “Touch” is a fantastic example of how Little Mix could take a track that might sound a little bit ordinary in the hands (and mouths) of another singer or group and make it exceptional. It makes sense that Little Mix won The X Factor, because that’s exactly what they have.

While Little Mix’s career may have technically launched with the single “Cannonball” (the song they released after winning The X Factor), some consider “Wings” to be their beginning. The track introduced what their sound would be and kicked off what would go on to be a legendary career. Unsurprisingly, “Wings” went right to No. 1 on the U.K. songs chart, and it even performed well in the U.S., becoming one of their only American hits.

Little Mix Is Officially No More

The beloved British girl group said farewell to their fans during the final concert in their Confetti Tour on May 14. 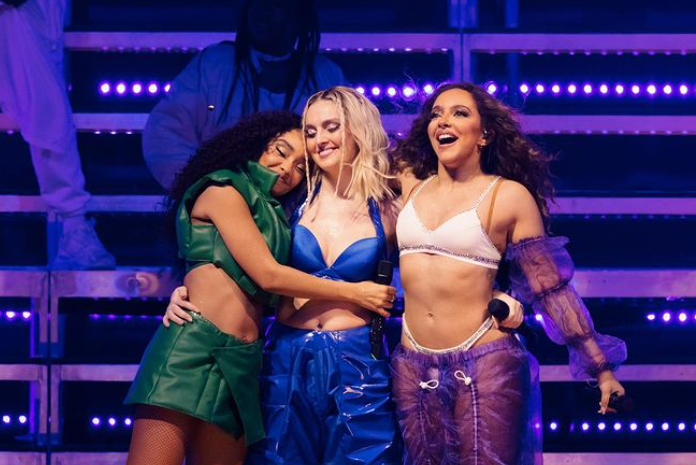 After more than a decade together, Little Mix is no more.

The beloved British girl group said farewell to their fans during the final concert in their The Confetti Tour, which took place on May 14.

The band had performed 28 shows on the trek, which took them around the UK and Ireland, and they wrapped the venture, which took place across more than a month, in London with three back-to-back-to-back performances at the O2 Arena. The venue can seat 20,000, and a musical act like Little Mix was sure to pack it for their final go.

Now that The Confetti Tour has concluded, the girl group — what's left of it, anyway — is officially on hiatus. Sometimes that means they'll be back in a few years with new music, but usually, in instances with vocal bands, it suggests that they simply didn't want to use the phrase "break up."