A federal appeals court has ruled that beauty pageants can’t be forced to accept transgender contestants under the First Amendment.

A three-judge panel of the 9th U.S. Circuit Court of Appeals ruled, 2-1, that the Miss United States of America pageant can discriminate against a transgender contestant due to a rule requiring that contestants must be “natural born female.” The two justices in the majority found that forcing the pageant to accept a transgender contestant was a form of “compelled speech” infringing on pageant organizers’ free speech rights.

The plaintiff, Anita Green, a transgender woman, attempted to compete in 2018 in the Miss United States of America’s Oregon pageant, but was not allowed to compete after the pageant director, Tanice Smith, sent Green a copy of the pageant’s rules, including the “natural born female” requirement, according to Fox News.

According to the appeals court, Smith reportedly offered to help Green find another pageant in which to compete, but Green threatened to take legal action against pageant organizers.

Green, who came out as transgender at age 17, and underwent both hormone therapy and gender confirmation surgery to have her body reflect her identity, subsequently sued, arguing that the policy discriminates against her on the basis of gender identity.

A lower court ruled in favor of the Miss United States of America pageant, claiming pageant organizers had a constitutionally-protected right to freedom of association, and that requiring the pageant to allow a transgender competitor would violate that right.

Although the 9th Circuit ruled in favor of the pageant, it argued that the justification provided by the lower court was wrong, and that forcing the pageant was protected by the First Amendment from having to engage in “compelled speech.”

“Our First Amendment jurisprudence has long understood ‘speech’ to extend ‘beyond written or spoken words as mediums of expression… reaching so far as to include ‘various forms of entertainment and visual expression as purely expressive activities,” Judge Lawrence VanDyke, a Trump appointee, wrote on behalf of the majority, joined by Judge Carlos Bea, arguing that the pageant’s rules reflect organizers’ views of what constitutes the “ideal vision of American womanhood.”

“Beauty pageants fall comfortably within this ambit,” VanDyke — who broke down and cried during his confirmation hearings after being accused by Senate Democrats of demonstrating anti-LGBTQ animus on various occasions — added. “As with theater, cinema, or the Super Bowl halftime show, beauty pageants combine speech with live performances such as music and dancing to express a message.”

“The pageant would not be able to communicate ‘the celebration of biological women’ if it were forced to allow Green to participate,” VanDyke wrote. “The First Amendment affords the Pageant the ability to voice this message and to enforce its ‘natural born female’ rule.”

But Judge Susan Graber, a Clinton appointee, criticized the majority for not first deciding whether the Oregon anti-discrimination law under which Green sued the pageant is relevant to the case.

“If the [OregonPublic Accommodations Act] applies, Plaintiff must prevail. If the OPAA does not apply, Defendant must prevail, but the constitutional argument passes out of the picture,” Graber wrote in her dissent. “The majority risks issuing an unconstitutional advisory opinion and flouts a longstanding tradition of judicial restraint in the federal courts.”

It is unclear at this point whether Green will appeal the ruling to the U.S. Supreme Court or request an “en banc” hearing in which all sitting justice on the 9th Circuit would rehear the case and come to a decision.

Her lawyer, Shenoa Payne, argued in court that the pageant corporation is predominantly a commercial business that enjoys “minimal protection” under the law, and asserted that the exclusion of transgender women “is not message-based, but status-based,” according to Oregon Live.

Alliance Defending Freedom, a right-wing legal organization that regularly takes on cases challenging the expansion or recognition of LGBTQ rights, celebrated the ruling.

“Ignoring the biological reality that men and women are different harms women and their opportunities to compete, excel, and win — from female athletes sidelined in their own sports to women competing in beauty pageants on the national stage,” Christiana Kiefer, senior counsel for Alliance Defending Freedom, said in a statement. 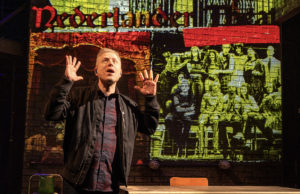 “Forcing the pageant to include a male would change the message of what it means to be a woman — similar to how changing the casting choices in the Hamilton production would alter its message,” Kiefer added. “We’re pleased the 9th Circuit recognized United States of America Pageants’ free-speech right to give women the chance to perform in beauty pageants designed to promote women.”

Miss United States of America is a separate pageant from Miss America or Miss USA, the latter of which featured a transgender titleholder representing Nevada last year.