Expect to see much more than just water sports at the 2008 International Gay and Lesbian Aquatics Championships (IGLA) in Washington, from June 18 to 22. Particularly on Sunday, June 22, says WonKee Moon, D.C. Aquatics Club (DCAC) member and director of this year’s event.

”Sunday is going to be the best day to come and visit,” he says. ”We will have swimming in the morning, then the water polo championships and then we’ll have the Pink Flamingo, which is sort of a campy competition.”

The Pink Flaming is the performance section of the competition where participants show their humorous side by lip-syncing and doing comical skits. Moon describes it as a mix of drag, synchronized water activity and performance art. In years past, the Pink Flamingo has featured Brokeback Mountain inspired skits and Britney Spears tunes.

”It’s kind of like the Olympics where cities have to bid to host the Olympics,” Moon says. ”So you put together a presentation of what aquatics facilities are you going to use, what social events you are going to have, and what makes your city a desirable place to have the championships.”

This year, the tournaments will play out at two venues: the Eppley Recreation Center Natatorium, at the University of Maryland, in College Park; and the Takoma Community Center in Northwest. Approximately 650 swimmers are expected to participate in this year’s championship, coming from all across the globe, including Australia, France, New Zealand, South Africa and the U.K. 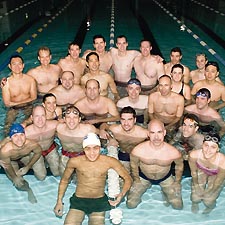 ”This is an event with swimming, water polo, synchronized swimming and diving,” says Moon. ”It’s basically the world championships for gay adult swimmers from countries around the world.”

This year’s social events include a women’s party at the Fab Lounge, nights out at Town Danceboutique throughout the weekend, and a closing banquet and dance party at H20, in Southwest. Trophies and awards will be presented at the closing banquet.

To prepare for this year’s tournament, Moon says some swimmers trained by swimming six days a week, about three to four months preceding the championship.

”The last couple of weeks before the championship, like right now, you rest more, you work on your sprinting, your dives, your turns, just so when the championships comes around you are rested and ready to go.”

For details about the International Gay and Lesbian Aquatics Championships, and attending the event, visit www.igla2008.org; for tickets to the closing banquet and dance, $20-60, visit www.swimdcac.org.