Wolverine offers a boring back-story, light on effects and feeling

What happens when the badass becomes the sweet and sensitive one? You lose the edge. And that’s exactly the problem with X-Men Origins: Wolverine. There’s no edge. Wolverine has been de-clawed.

The X-Men franchise, which seemed to have run its course with the high X-Men body count in X-Men: The Last Stand, has taken a page from Cher’s Farewell Concert(s): If there’s money to be made, just reinvent yourself and do it again. 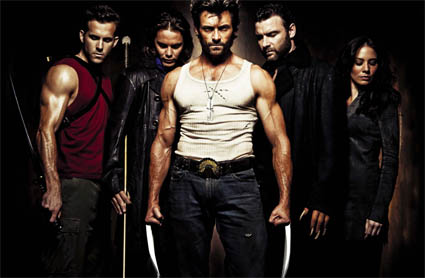 Sadly, in the execution of the ”if we make it, they will come” philosophy, no one bothered to write a decent script, create impressive special effects, or invest in the performances. It’s a triple threat as deadly as Wolverine’s right hand.

X-Men Origins: Wolverine is just as the title suggests — the back-story of how Wolverine (Hugh Jackman), the virtually indestructible mutant, was turned into military-enhanced killing machine. It also suggests we’re in for X-Men Origins: Storm, X-Men Origins: Gambit, and countless others, but that’s too disheartening to think about now.

Wolverine’s story goes all the way back to 1865, with Jackman playing a doomed “ye olde time” father to a young James, who will grow up to become Logan/Wolverine. James, in an attempt to avenge his father’s death, discovers his mutant powers for the first time — boney claws that protrude from his knuckles — and kills his father’s murderer. But it turns out the man he killed was actually his father. Confused? Don’t worry, because it’s a plot point that’s never revisited.

All that really matters is that James/Logan/Wolverine has a brother — Victor Creed/Sabretooth (Liev Schreiber). For the opening credits, the two head off to every major war, trading their muskets for machine guns through time, until Victor’s blood-thirst becomes a liability. That’s when the military gets interested. And that’s when the movie should get interesting with a host of new mutants on the scene.

But the cast of new faces is brief indeed. In fact, outside of Schreiber, the more recognizable the face the less you’re going to see it. For a brief time, Wolverine and Sabretooth are part of an elite military squad, which also includes Bolt (Dominic Monaghan), Deadpool (Ryan Reynolds), Agent Zero (Daniel Henney), and John Wraith (Will.i.am), but Wolverine’s discomfort with military tactics causes him to go AWOL.

Living happily in the Canadian mountains, Logan is a logger and lover, until military leader William Stryker (now played by Danny Huston) returns to try and lure Logan back to his Wolverine side. What follows is the crux of Wolverine’s creation — what does it take for Logan to embrace his mutant side and thirst for blood and revenge? The devices writers David Benioff and Skip Woods use are about as flimsy as they come. Because what first appears to be sloppy plotting or poor editing is actually the pivotal point that supports the whole film. It’s like trying to build a house of cards on the back of a running cat in the middle of a storm. Their attempts to craft a story that fits the next three chapters are downright clumsy.

Director Gavin Hood creates a mutant of his own with Wolverine. When compared to the other three films, this one stands apart as an awkward outsider. Hood fails in creating any emotional connections to the characters, and this is a film about the transformation of Logan/Wolverine’s soul. But rather than demand a performance from Jackman that shows the internal struggle, he directs Jackman to flex his muscles, grimace and run around in an undershirt. When that gets tiring, you know there’s a problem. And just because the film comes first chronologically, he didn’t have to turn back time on the quality of the special effects.

Schreiber is the best thing going for the film. He brings a great deal of menace — and fun — to Sabretooth and actually develops the role more than Jackman does for Wolverine. Both are saddled with incredibly trite and cheesy lines, but Schreiber has the liberty to go all-out baddie and this freedom benefits him. Jackman, on the other hand, is a more convincing Wolverine as a straight-up, wise-cracking badass as seen in the prior films. His softer side never really takes in Wolverine.

From the sets to the special effects, Wolverine feels like a cheap knock-off. The final scene, a pseudo-apocalyptic landscape, is just comic. Not comic as in book, but comic as in laughable. What makes it better than the preceding scenes is that it signals that the film is almost finished. And when it’s over, you can go ahead and claw your way to the door. The 30-second scene after the credits — now customary in Marvel stories — isn’t worth the wait.