The 2009 Metro Weekly Next Generation Awards

Recognition for our GLBT community leaders and activists under 30 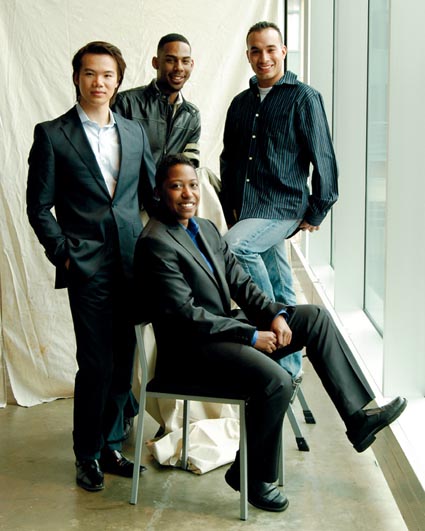 The story of our community is a story of generations.

The generation that braved the era of McCarthy and the Red Scare to picket in broad daylight in front of the White House.

The generation that embraced the Summer of Love in a new and novel way, and that took to the streets of New York to fight back against oppression.

Metro Weekly’s Next Generation Awards recognize the accomplishments of GLBT leaders and activists under the age of 30, as well as encourage their success in the future. From a field of remarkable nominees, a panel of GLBT leaders representing a broad cross section of the community chose four individuals whose achievements and potential made them truly representative of our community’s next generation. (For a full listing of the Next Generation Awards selection panel, see below).

The four honorees — EbonÃ© Bell, Linh Hoang, JosÃ© Ramirez and Brian Watson — not only show promise in what they have achieved so far, they show promise that their best is yet to come.

Nominees for the Metro Weekly Next Generation Awards were solicited through an open call to the Washington metropolitan community. All nominees were reviewed, and winners chosen, by a panel of GLBT community leaders invited to serve by Metro Weekly. For full bios of all panelists, visit www.metroweekly.com.

The Next Generation Awards are presented in partnership with Witeck-Combs Communications and The Madison, a Loews Hotel.

Doug Rule covers the arts, theater, music, food, nightlife and culture as contributing editor for Metro Weekly. Follow him on Twitter @ruleonwriting.
← Previous Story An Officer and a Thespian
Next Story → Body Language