Washingtonians share their District with a virus that refuses to leave.

HIV is still here. It can still be fatal. And it’s spreading at a rapid pace.

”While you can live a long life with medication, it’s better not to have the disease because it still can be fatal,” says Dr. Terence Gerace, a former volunteer for Whitman-Walker Clinic’s Gay Men’s Health and Wellness Center, from 2004 to 2008. ”I think we sort of lost sight of that fact.” 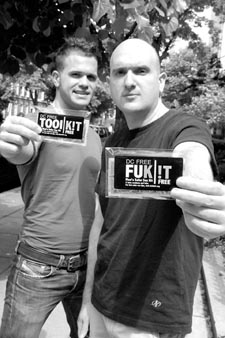 According to Dan O’Neill, chair of the DC Center’s Gay/Bi/Trans HIV Prevention Working Group, the D.C. Department of Health provides 3 million condoms and lubricant packs annually for distribution to places that attract men who have sex with men (MSM) — but they’re not as ”freely accessible” at gay venues as they used to be when HIV first hit.

”All of the clubs and businesses that we’ve spoken to say their biggest barrier is there’s no mechanism in place to distribute them. It’s too difficult for them to be dump-trucked with thousands of condoms and lube, and the Department of Health saying, ‘Go distribute these.”’

That’s why Gerace and O’Neill, with help in funding from the DC Center and Gerace, are currently building custom-made dispensers to be installed at local bars, clubs, restaurants and gyms that have large gay clienteles. Look for them starting in late May.

”The real thrust of this campaign is to provide freely available and accessible safer-sex kits that include both lube and two condoms so that people are empowered,” O’Neill says, adding that the dispensers will appear as permanent fixtures at venues such as Town Danceboutique, as well as portable versions at mobile events, such as The New Gay’s “Homo/Sonic” party.

”This is far different from going off and doing these one-off, condom-distribution campaigns. When people do that, that’s great. But often they’re not co-distributed with lube. Â… More importantly, people can’t count on those condoms being there or knowing where they are at the moment of need.”

These new dispensers are to be mounted near exit doors and in restrooms.

To promote the campaign, O’Neill says his group plans to assemble and distribute 20,000 kits, each containing two latex condoms and lubricant, at events aside from the regular venues, including the upcoming Capital Pride Festival.

There are two different versions of the safe-sex kits: the ”TOOLKIT,” designed to be distributed at restaurants and gyms; and the ”FUKIT,” which will be distributed at clubs and bars. The contents will be the same.

The moniker ”FUKIT” was designed to grab the attention of those who are ”close to the point of end use,” O’Neill says. He adds that that’s crucial, considering a ”steady increase [in risk behaviors] among men who have sex with men,” nationally and locally since 2001, which he attributes to a number of factors.

”One, due to the advent of the Internet, it made anonymous sex much more facilitated. You’ve got a crystal-meth epidemic that’s raging. And there’s also this new barebacking phenomenon: a new generation of young men who didn’t see the devastation that HIV and AIDS caused.”

In addition to the safe-sex kits, Gerace says the group is currently in the process of creating a Web site that will include videos of local male models showing viewers how to put on a condom, an idea inspired by a similar Brazilian campaign.

”A lot of times, condom campaigns will use euphemisms, like ‘raincoats’ and things that are not tremendously sexy, to promote condom use Â… usually because they’re funded by the government or a private group. People are restricted from doing a little more edgy presentations,” says Gerace.

”We’re trying to eroticize condom use. It’s part of a healthy sexuality.”

For more information about the DC Center’s the Gay/Bi/Trans HIV Prevention Working Group, or to make donations to the safer-sex campaign, visit www.thedccenter.org, or call 202-682-2245.