The band The Sounds makes music that’s every bit as derivative as Lady Gaga’s, and the Swedish band’s ambitions seem every bit as bald as The Fame-seeker’s. And yet, even if you don’t quite get all the hoopla over the Gaga, chances are you wouldn’t begrudge The Sounds if the quintet were to catch on. How do you square that?

The essential ingredient is fun. The Gaga is so consumed with money and fashion that her recorded output, full of overplayed robotic electro-pop and clichÃ©d lyrics, sounds like work – a job she has to do to be able to lead a life of the rich and famous, onstage and off. The Sounds, meanwhile, makes unobjectionable, straightforward, radio-aspiring pop-rock – also with clichÃ©d lyrics – that betrays real passion for the music. Making music sounds like exactly the kind of job this quintet is only too happy to have. That the band apparently puts on quite a live show, too, is beside the point. (If it weren’t for a little thing called Capital Pride, you might try to check them out Sunday at Nissan Pavilion as one of No Doubt’s opening acts.) 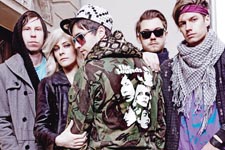 The Sounds’ new album, Crossing the Rubicon, is its first since splitting from major label New Line Records and starting its own. It’s not a radical departure from the Blondie-inspired new-wave band’s first two sets – there’s just very little that’s radical about The Sounds. Bisexual lead singer Maja Ivarsson repeatedly cries, wistfully, ”I’d do it again, if I could” at the end of the first song, ”No One Sleeps When I’m Awake.” Whatever it is, you don’t doubt her sincerity.

She and the four men in the band, together since high school, only a decade ago, express eagerness throughout the music and lyrics to repeat, revisit and re-imagine the past. As Ivarrson sings on Crossing the Rubicon‘s rousing standout, ”The Underground”: ”The past is a place that you can never return to, even though people say, that this is where you belong.” The statement seems to be sly self-acknowledgement that the band is not on the cutting-edge. But with this much spirit and playfulness, the cutting-edge can wait.

The Sounds is the type of group that fans of The Cars and especially Blondie could get into – as well as fans of other new-wave inspired contemporary acts, including Tegan & Sara and Junior Senior. One song provides another inspirational a-ha moment: ”Lost in Love” features a short keyboard solo that echoes a similar bridge in the 1985 hit ”Take On Me” by Norwegian band A-Ha.

The album’s title draws from the time of the Roman Empire, referring to a river in Northern Italy, another term for reaching a point of no return. In essence, the band is saying this is it, love it or leave it. The Sounds remains a bit too middle of the road to compel that kind of devotion or disdain. But with Crossing the Rubicon, the band takes a few steps closer to inspiring love and devotion. Take the song ”Beatbox”: A hit waiting in the wings, it’s a Queen-like dramatic rocker offering pure nostalgia, right down to the cute, colorful lyrics, chiefly about a ”silver-framed” beatbox. Maja raps the verses here, sounding a bit like Gaga. It’s the kind of song that makes repeated listens worthwhile – with such playful lyrics, you’ll want to play it back again and again, smiling as you sing along.

Anderson
It Runs in the FamilyU&L Records
$11.98

If The Sounds recalls Blondie, the Dutch electro-pop duo Anderson sounds most like The Postal Service, the electronica side project between Death Cab for Cutie’s Ben Gibbard and rock producer Jimmy Tamborello. Since that smooth and sweet pop duo from earlier this decade seems to have been a one-off, the smooth and sweet pop duo of Bas van Nienes and Jeroen Van der Werken will have to fill the bill.

Anderson’s understated electronic music is as wistful as it is optimistic on the duo’s second album but first U.S. release. It Runs in The Family is a concept album about the Bensons, an estranged, far-flung family who keep in touch mostly through the occasional postcard. Each song focuses on a different family member. First single ”Trevor * On The Dancefloor” is the set’s best, focused on a city boy who just loves clubbing. ”He’s not exactly a stereotype,” the duo sings. ”I know you’re surprised, because I was surprised too.” They don’t come right out and say it, but signs suggest that Trevor is gay.

The world is certainly a better place because he’s in it, they conclude. ”Is it the way he moves that makes the world go round?” Happy pride, Trevor, wherever you are.