One way to look at bi-national couples, couples of differing nationalities, is as a booming business. Enter “mail order brides” into nearly any search engine and it will return a bounty of hits from companies offering to facilitate introductions and dialogue — for a fee. Some even offer helpful immigration advice, such as the Rose Brides site: “[I]f done correctly and with the right patience and necessary evidence, paperwork, and steps, filing for and having your Russian bride enter the United States is relatively simple.”

Under different circumstances, such a Web site might even amuse Joe and Steve. But with the clock ticking, and the federal government poised to extinguish their nine-year relationship — which it legally refuses to acknowledge to any degree, despite their D.C. domestic partnership and Connecticut marriage — nobody’s laughing. Instead, Joe and Steve are scrambling as the hourglass empties and Joe faces expulsion to his native Indonesia, and back into the closet of this majority-Muslim nation. 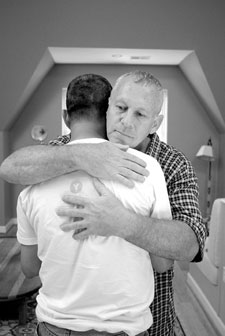 Both Joe and Steve asked that their last names and other identifying information be omitted from this story, fearful of an overzealous immigration officer picking up on their case. After all, in one reading of the law, Joe has been in non-compliance of his visa since getting laid off from his job recently. To add to their troubles, the lay off comes just a few weeks after they signed the mortgage papers to their new Columbia Heights condo.

“If we were heterosexual, then we could just marry, no questions asked,” Joe says with frustration. “Steve could sponsor me as family.”

Some might cynically wonder why the two men, aware that U.S. immigration authorities make no allowances whatsoever for same-sex couples, despite marriage being among the simplest ways for heterosexuals — and their children — to gain U.S. residency, didn’t stop this relationship before it started.

“I didn’t choose to fall in love,” Joe answers. In other words, the mystique that makes marriage so powerful an institution that it can bypass borders, is the same mystique to which Joe and Steve succumbed.

But reckless they were not. Before signing their mortgage, for example, Joe sought assurances from his employer that the current recession would not affect his employment or the “green card” application he filed as an employee of that company. While he got those assurances, and therefore the confidence to go ahead with the purchase of the couple’s condo, those assurances proved empty. Aside from those assurances, Steve says that once Joe finished school, resulting in the end of his student visa, a man with Joe’s academic credentials should not have trouble finding work. And there is, indeed, plenty of demand for Joe’s skills. Those jobs, however, usually come with a caveat that non-U.S. citizens are not welcome to apply.

Adding to their frustration, Joe’s permanent-residency permit, aka green card, was to have been issued “any day.” But as soon as he became unemployed, that application process halted as a result. Had the card arrived prior — if by only a day — Joe would not be facing deportation.

“Once Joe gets his green card, he doesn’t even have to work,” Steve points out. “He could sleep under a bridge. He could get a job at McDonald’s or Starbucks.”

Without that residency status, however, the only job that Joe can get — the only way he can stay in the country legally — must be in his field of structural engineering. With such a job, he could also restart his residency application.

There’s also a point of pride with Joe that underscores not only the possible heartache these men are staring down, but the economic loss to all Americans: Joe’s higher education at U.S. universities was paid for with American scholarships.

“I didn’t pay for my education,” he says. “I had full scholarships. Taxpayers invested in me. I was working, using my knowledge and paying taxes. I want to pay back this country.”

That payback will have to wait, if it comes at all. Steve and Joe are looking at their options. The best-case scenario would see Joe working again in D.C. as a structural engineer. Lesser scenarios might force them to move, but would allow them to stay in the U.S. Then there’s Canada. With Joe’s degrees and Canadian marriage equality, Canada would likely welcome Joe, his skills, and his spouse. Another variable, Steve’s aging parents living in the area, also makes moving to Canada less than a panacea.

“We’re pursuing [Canada] as an option,” says Steve. “We’ve hired an immigration attorney and we just sent them all the papers requested, and we’ve paid for it. We could go on and on about how much money we’ve paid [immigration] attorneys.”

Sadly, Joe and Steve’s case is not unique. Immigration Equality, with offices in D.C. and New York, estimates there are 36,000 bi-national same-sex couples in this country either facing separation or who have already been separated by U.S. immigration law. About half of those couples have children. On Capitol Hill, Rep. Jerrold Nadler (D-N.Y.) has been pushing the Uniting American Families Act for nearly a decade. His bill would allow partners to sponsor their partners of either sex, rather than opposite-sex spouses alone. That effort was recently integrated into broader immigration-reform legislation, the Reuniting Families Act, sponsored by Rep. Mike Honda (D-Calif.). Sen. Patrick Leahy (D-Vt.) is leading the effort in the Senate.

Nadler doesn’t pull punches in characterizing the current laws, the ones that are forcing Steve and Joe to consider separation and immigration among their few options.

“This is simply gratuitous cruelty,” Nadler says. “It serves no interest of the United States to be cruel to these people.”

Such a change in the law could have an immediate and positive impact on Joe and Steve, but there’s no guarantee when it comes to legislative timetables. Immigration timetables are another thing altogether and Joe and Steve reckon they’ve got till October to find a solution to their own immigration inequality.

“The clock is ticking,” Steve says apprehensively. “We’re hoping that somebody who reads about us will hire Joe. He’s able to teach, he’s able to do research, he’s able to design structures. We’re also hoping to educate the general public and the gay community that bi-national couples are out there, in the same boat we’re in.”

For more information about Immigration Equality, including the organization’s work in Congress, visit immigrationequality.org, or call 212-714-2904.