The heat was on and Mayor Adrian Fenty’s G-men were out. Of course, the “G” stands for “gay,” referring to the mayor’s liaison to the GLBT community, Christopher Dyer, and his program manager, Clarence Fluker. And the heat? Well, that was just heat — about 95 Fahrenheit degrees of it. But still they came.

“The city is hot right now — hot in lots of ways,” Fenty teased the crowd, numbering about a thousand at its fluctuating peak Monday night, Aug. 10, as locals filled Stead Park at 17th and P Streets NW. They were all there to show the three members of the Federation of Gay Games’ Site Selection Committee that D.C. has the hometown spirit to host the 2014 Gay Games, and that it would take more than a heat advisory to quash it.

Aside from the mayor, others were on hand to cheer on that spirit, including D.C.’s Different Drummers, the Batala Percussion Band, and the Washington Nationals mascots, the Racing Presidents. Brent Minor, the unofficial prince of pep and president of Team DC, the umbrella organization for the area’s GLBT sports organizations, surely shouted himself hoarse from the small stage at the corner of the field. 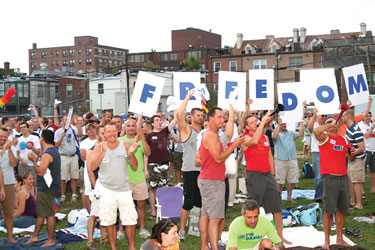 Vince Micone, president of Metropolitan Washington, D.C., Gaymes (MWG) — the entity making the official bid to host the games and now doing business as “Gay Games IX: The Freedom Games” — was a bit more coy, joking to the crowd that, should D.C. win this bid against fellow finalists Boston and Cleveland, he’ll be hosting a party for the Brazilian men’s soccer team, while MWG Vice President Lynne Brown will be holding a picnic in her backyard for the Australian women’s softball team.

Stephen Cohen isn’t joking when it comes to what he plans to offer. The Northern Virginia resident made his way to Stead Field Monday to show his enthusiasm for the bid, having attended the Vancouver games in 1990 and Amsterdam in 1998. As an attorney, he’s eager to volunteer legal services to the effort — or to help with IT issues, translate for French and Spanish speakers, or fundraise.

On that last score, by Metro Weekly deadline Tuesday, Micone says he last heard that a text-message fundraising plan launched at the rally via Mobile Matters, an MWG sponsor, had raised about $5,000. That avenue for donations will be continued into the near future, at least, with donations made by texting the message “Freedom” followed by a whole-dollar amount to “DONATE” (366283).

Midday Tuesday, after the Site Selection Committee wrapped up the visit, Micone was feeling pretty confident.

“It was fun being part of the process, going around and seeing the venues,” he says. “It was more impressive to see some of the places firsthand, and all at one time. When you put if all together in one package, it’s pretty impressive what we can do here.”

Micone and about 10 others from MWG will have a final chance to make that argument before the Federation of Gay Games in Cologne, Germany, in late September. Washington can expect a final decision by Sept. 30.

For more information about the bid, visit www.dcfreedomgames2014.org.