Clayton Miller did not exactly leap at the opportunity to apply for a scholarship for out gay athletes. While students will often jump through all sorts of hoops for a chance to secure some funding for school, Miller had reservations. “I wasn’t sure whether I should apply for it or not,” he says of Team DC’s Student-Athlete Scholarship, “because I wasn’t sure how public it was.”

The 18-year-old was “scared and apprehensive” to accept the $1,500 scholarship from Team DC because he’s still in the process of coming out to friends and family. “But if this does anyone good, or motivates anyone,” he says of his acceptance of the award presented to him during a public reception at the HRC Equality Forum on Friday, Aug. 7, “then that outweighs any negatives that it might have.” 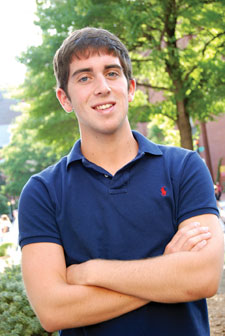 To be sure, Miller’s story is one bound to motivate other GLBT athletes.

The Arlington resident and recent high school graduate played on the varsity tennis and swim teams at Wakefield High School during all four years there, part of the Arlington Public Schools system. As a swimmer, he was crowned Most Valuable Player out of about 40 other teammates two years in a row, and served as team captain during his junior and senior years.

“Because I’m one of the few people on the team who swims outside of Wakefield, and one of the few people who had prior training in new techniques,” he says, “I was able to step up and lead the team, even as a younger swimmer.” That includes leading drills and technique exercises during practice sessions for the swim team’s competitive races.
Miller’s love affair with swimming the butterfly stroke competitively goes back to when he was 7 years old. He dabbled in other sports such as soccer, baseball, taekwondo and basketball, but it was swimming and tennis that sparked a passion and proved the most rewarding.

“I’ve won MVP two years in a row and in my summer league won the Coach’s Award…. In tennis I’ve won a sportsmanship award and Coach’s Award.”

For Miller, being gay never influenced his drive as an athlete — that is, not until he started to come out to his family and friends.

“It was about having to prove myself and show that I’m just as good, if not better, than a lot of the athletes on the team,” he says, “and that my sexual orientation didn’t really have an effect on my ability to swim or play tennis. I think people would doubt that, just because of the society we live in.“

Breaking such stereotypes was also the theme Miller chose for the essay portion of his Team DC scholarship application, a scholarship begun in 2008 when the local, volunteer-based organization that encourages members of the GLBT community to get involved with sports, awarded three scholarships.

The purpose of the scholarships, according to Team DC, is to recognize gay and lesbian student athletes who have “enhanced the perception of the LGBT community” by contributing to their particular sports. Both this year and last, the scholarships were funded by money raised at Team DC’s spring fundraiser, the Fashion Show & Model Search.

This year, however, Miller is the sole recipient.

Gregory Campbell, Team DC’s secretary and a board member of the group’s DC Student-Athlete Scholarship Committee, says it’s mainly due to a lack of qualified applicants this year.

“There are a lot of students who are not going to college,” says Campbell, “because this economy has really hit a lot of people. Secondly, it is a new scholarship. We’re still getting accepted. We’re looking at a very small group of individuals. We’re trying to identify out, gay and lesbian students who play sports. And many students are still very wary about being out.”

In coming years, Team DC is hoping to expand the scholarship into a fellowship program, offering recipients a sum of money for each of the four years they are in college, rather than the one-time sum now awarded.

Regardless of what enhancements the future may hold, Miller is grateful for the $1,500 he’ll be using to help with his tuition, room and board at Virginia Tech this fall, where he plans to study environmental science.

“Clayton has always been an outstanding ambassador for his school,” says Campbell, Miller’s swim coach and a teacher at Wakefield, recused from this year’s selection. “The fact that he’s gay kind of just adds on to it.”

In his essay, Clayton writes that “being able to break stereotypes and prove people wrong has inspired and motivated me to work even harder and create my own identity. While some of my peers start out skeptical, I have continued to be true to myself, knowing I can lead others and accomplish anything.”

Miller offers a few words of wisdom for young GLBT athletes who may one day follow in his footsteps.

“Don’t be afraid of what might happen,” Miller says. “Do your best and always hope for the best. If you set a good image for yourself, other people are going to see that, and think of you that way.”