It could have happened in Washington.

But on Tuesday, Sept. 29, the Federation of Gay Games (FGG) announced from Cologne, Germany, that Washington and Boston lost their bids to host the 2014 Gay Games. Instead, the eight-day event, featuring 30 sports and estimated to generate more than $50 million, is heading to Cleveland. 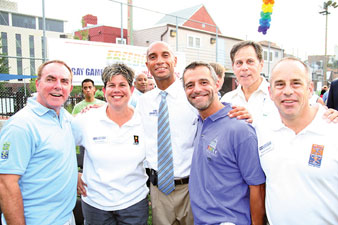 ”I promise you that on behalf of our leadership, when you come to Cleveland, Ohio, U.S.A., we will, we will rock you,” Valarie McCall, chief of government affairs of the Office of the Mayor in Cleveland said during a live webcast Tuesday announcing the winning city.

In a press release issued shortly after the announcement in Cologne, host city of next summer’s 2010 games, the FGG noted that Cleveland was selected for 2014 because of the city’s ”top-flight venues, fiscal accountability and widespread community support.”

”Cleveland demonstrated to the Federation of Gay Games that they understood the mission of the Gay Games and our principles of ‘Participation, Inclusion, and Personal Best,”’ FGG co-presidents Kurt Dahl and Emy Ritt stated in the release. ”We were highly impressed by the facilities and infrastructure, the widespread community sport, their financial plan and the city’s experience in hosting large-scale sports and cultural events.”

It was a hard pill to swallow for the locals who have spent the past six years promoting Washington as a Gay Games contender, making it all the way to the final three.

”We can’t help but be disappointed,” Micone told Metro Weekly about 40 minutes after hearing that Cleveland had won. ”It’s been a hard evening here. Obviously, people invested — literally — years and hundreds and thousands of hours and dollars into our bid and we heard very positive things about our bid. We certainly wish Cleveland well, and we’re very thankful to all of the people who have worked on this bid and have supported Metropolitan Washington Gaymes. We have heartfelt appreciation for their support.”

In D.C., Cecilia “C.C.” Ford, a lesbian athlete who founded the League of Women Bowlers and who has a seat on the board of Team DC, went running to her laptop to catch Tuesday’s lunchtime webcast.

”It was heartbreaking,” she said. ”I really don’t understand at all why we lost. It is just totally devastating to me. I don’t know what Cleveland has to override us.”

Ford, who bowled in the 2006 Gay Games in Chicago, added she’s happy the games are at least going to be in the United States come 2014 and will attend the Cleveland games. ”I don’t think a location has anything to do with anybody’s participation. It shouldn’t — not if you’re a true athlete. I wanted D.C., that’s my home, and we worked hard, but there will be other times.”

While she’s trying to be positive, Ford admits that she is shocked by the announcement.

”We just had this,” she said. ”There was no way I could see the nation’s capital not winning. We have the perfect venues and everything in this area, and we really worked our little tails off. The bid committee did an excellent job preparing this bid proposal.”

D.C.’s loss puts into question the fate of Metropolitan Washington Gaymes, as the nonprofit organization was set up specifically for Washington’s 2014 bid.

”We just found out that six years of work is not resulting in where we want to go,” Micone said. ”So I need to get with the board and we will determine whether we want to remain organized to consider bidding again. It’s something certainly that we will look at.”

Lynne Brown, vice president of Metropolitan Washington Gaymes, also in Cologne for the announcement, said the loss is disappointing, especially considering the effort the entire city had made — an effort that included Mayor Adrian Fenty’s liaison to the GLBT community, Christopher Dyer, as well as Deputy Mayor for Planning and Economic Development Valerie Santos, both of whom traveled to Cologne as part of the D.C. contingent.

”It’s just hard being here,” Brown, also the publisher of the Washington Blade, said following the announcement. ”It’s years of effort on the part of hundreds of people in Washington.”

Brown was uncertain as to what may have worked against Washington.

”We have absolutely no feedback or information on how the vote went and what might have influenced their decision. The only thing we heard is that all three cities were incredibly good at what they presented. Everything was good from all three. We’ve had no criticism or feedback whatsoever.

”It’s complicated, and it’s over, and it’s not happening for D.C.”