The Vampire's Assistant tries to be funny, dark, lighthearted and macabre -- all at once.

As the vampire-version of Buffy the Vampire Slayer‘s Willow liked to say, ”Bored now.” Maybe that’s not completely true for every minute of Cirque du Freak: The Vampire’s Assistant, but it certainly applies more often than not.

Continuing the trend of digging up anything vampire-related and dragging old texts into the light of day, Darren Shen’s “Cirque du Freak” series, first published in the UK in 2000, has been updated for the post-Twilight world. The Vampire’s Assistant, not to be confused with the television show The Vampire Diaries, also based on books aimed at teens a decade ago, tries to be funny, dark, lighthearted, and macabre — all at once. As with any project that attempts to be all things to all people, it has its moments of success and its moments of failure. 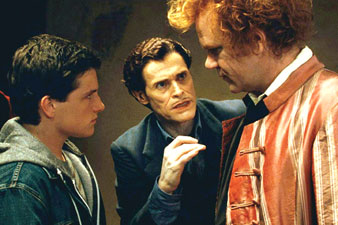 Darren (Chris Massoglia) is your typical good kid, while his best friend Steve (Josh Hutcherson) is the bad influence. But you wouldn’t know these distinctions when the duo sneaks out to attend the traveling freak show, and one steals a spider while the other begs to be turned into a vampire. In their tiny little town, once quaint but now surrounded by strip malls, the supernatural almost seems natural.

It’s no wonder Cirque du Freak piques the boys’ interest – the freaks are the most interesting part of the film. Featured, with sometimes nauseating clarity, are the ribless man (eat your heart out Cher), the man with two stomachs, the bearded lady (Salma Hayek) and the regenerating limbs woman (Jane Krakowski). The Freaks’ performances are brief but mesmerizing, and their winter campground is absolutely magical. Director Paul Weitz really focuses on this setting and nails it.

Weitz, whose previous credits include co-directing films like American Pie and About a Boy with his brother Chris, has attempted some interesting things with Vampire’s Assistant. At times the visuals are so cartoonish that they aren’t meant to be realistic — that stolen spider running around a school being one example. Other scenes, like the final fight to the finish, is a blur of action that is carefully choreographed and filled with excitement. But ever-changing perspective shots, ranging from tracking the spider’s point of view to flipping the camera to shoot upside down, cause constant disorientation.

Weitz’s biggest failing is one that could have been avoided by paying more attention to one of his brother’s films, The Golden Compass, created to be the first part in Philip Pullman’s “His Dark Materials” trilogy. The pacing, set-up, and climax were all designed to be one part of a larger whole. The same is true with The Vampire’s Assistant, but so much time is spent laying the groundwork for a future project that the film also suffers for it. The final 10 minutes are nothing more than teasers and hints at what’s to come in part two — that is, if “Cirque du Freak” can avoid the fate of “His Dark Materials” and not have the plug pulled on the remaining films.

As leads, Massoglia and Hutcherson are adequate enough. Neither seems destined for the fame found by the Twilight leads, but they mainly hold their own on screen. The budding straight-boy bromance between the pair has its tender moments. And Massoglia has better chemistry with Hutcherson than with his real onscreen love interest, played by Jessica Carlson, an Ellen Page knock-off.

Appearances by some of the bigger names in the film — Hayek, Krakowski and Willem Dafoe — are so quick that they should be labeled cameos rather than actual roles. The exception is John C. Reilly who, playing Darren’s mentor and sire, seems almost built for the part. Reilly embraces the soulless part of his job while seeming to put a heart beating into his character’s cold, dead body.

One more fun fact about the brothers Weitz is that while The Vampire’s Assistant was Paul’s project for the year, Chris is helming the soon-to-be released New Moon, the second film in the “Twilight” saga. While the quality of that blood-sucking fest remains to be seen, The Vampire’s Assistant sets a low bar. So you can stay at home for now and settle for a good Halloween party — it’s not time to run off and join the circus just yet.