In Keegan's Mice and Men, the tension is high, the tenor is loud, and any hope of nuance dissolves into black and white

The folks at The Keegan Theater have brought Of Mice and Men, that bane of high school sophomores everywhere, to the stage of their new home at the Church Street Theater.
While not without some very well-crafted scenes and solid performances, the play’s full movement is too often hindered by a tone that is monotonously aggressive. The tension is high, the tenor is loud, and any hope of nuance dissolves into a very black-and-white rendering. 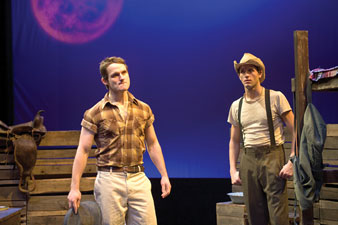 Of Mice and Men
(Photo by Jim Coates)

True, Of Mice and Men is hardly a lighthearted musical comedy romp through America’s agricultural history. Like the John Steinbeck novella on which it is based, the drama tells the story of George (Mark A. Rhea) and Lenny (Danny Gavigan), a pair of migrant farm workers in the late 1930s. The two men travel together from job to job; George taking the lead and acting as guardian for the extraordinarily strong but mentally impaired Lenny.

George knows that he could move faster without his outsized companion. He could easily earn a better living and enjoy the fruits of his labor more if he weren’t constantly responsible for Lenny. But an unspoken sense of responsibility and loyalty ties the two together.

These ties hold even when Lenny’s childlike understanding of the world and careless brute strength combine to make trouble for the men and sends them back out on the unforgiving road. It’s a grim life based on equally grim history. But the brutality of the real world is one thing. The dynamic of a play is yet another. 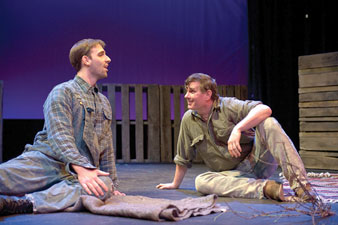 Of Mice and Men
(Photo by Jim Coates)

The strain present in Of Mice and Men is ratcheted so high from the outset that there is literally no headroom left. We crave relief not simply for the sake of comfort but for the establishment of some rhythm in the production. There is a largely unanswered desire to witness some kind of ebb in the emotional landscape, to be offered the sensation of an unexpected texture, to be able to embrace characters who are more fully realized, more wholly constructed. We get a glimpse of that in the play’s final moments, a moment of emotional clarity and beautiful acting courtesy of Rhea and Gavigan. It’s a stunning scene and makes one long to have had that kind of experience throughout the show.

Gavigan is a fine actor with a steady hand and a clear sense of character development. Playing a character with any sort of mental disability is a difficult assignment. Go too far and you enter the realm of sideshow mockery. Fail to push it far enough and an actor can look careless and unserious. Gavigan has found that bright balance and put it to good use.

OF MICE AND MEN

An excellent selection for George, Rhea stands in contrast to Gavigan’s lumbering giant. But his performance seems overly managed and pushed in too narrow a direction. His volume is consistently loud, his postures immobile and angry, his eyes constantly glaring. It hollows Rhea out as an actor. In those rare moments when Rhea is afforded opportunity to shift or transform – leading one to believe that the collection of flat characterizations brought to the stage are an issue borne from Kerry Waters Lucas’s direction – there is a refreshing glimmer of humanity afforded to George. We see another dimension emerging, another side coming into the light. As an audience it gives us the chance to take a long, very welcomed, breath.

In the book and the play, the thing that most works against Lenny is his inability to see the world more broadly. He thinks only about the rabbits he and George will one day own. In the end, it is this kind of hindered vision and limited palate that frustrates Keegan’s production.