As a child, Brian Picone would run around in the park winding his arm like a propeller.

”Brian was a force of nature,” Picone’s father Mike Picone said during a memorial service for his 22-year-old gay son, who died of cardiac arrest on Monday, Oct. 26.

”He would run up to us with a big grin on his face, vibrating with energy…. The first word that he and [his twin brother] Scott learned was ‘go,”’ Picone said to soft laughter. 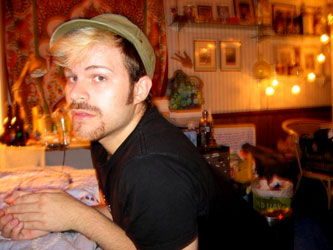 That was the mood of the event because for the more than 300 people in attendance — including teachers, friends, family and acquaintances at the Oct. 30 memorial at the Unitarian Universalist Congregation of Fairfax — the gathering was not a funeral. It was a celebration of Picone’s life and how the young man who grew up in Falls Church changed the world around him.

Robert Rigby, a math teacher at Falls Church High School, where Picone was a student, spoke to the crowd about how his life had changed after meeting the young man. Picone’s drive to start the first Gay-Straight Alliance at the school — the second in Fairfax County — had inspired Rigby to teach there.

”Because Brian, with his courage, with his bravery, had made Falls Church a safer place for me to be an openly gay teacher, he made a huge difference in my life,” Rigby said, breaking into tears.

Leah Perry, a professor in gender studies at George Mason University, was with Picone when he went into cardiac arrest. She had invited him to guest lecture on Judith Butler’s writings during her course and the two were taking a break.

”The thing that’s most frustrating about it is that [for] people who did not know him, it’s hard to articulate just how special he was,” Perry said. ”As a teacher you don’t want to admit you have favorites, but he was someone who you really wait your whole career to get when you’re a professor. [He was] the one who is earnest, committed and listens to you and hears you — not a sponge — but somebody who…engages with you, and challenges you.”

In May, Picone graduated with honors from George Mason University with a bachelor’s degree in integrative studies, concentrating on gender, society and human rights.

While Picone’s family were not yet ready to talk about the circumstances surrounding the young man’s death, friends say Picone was a performer, popular at GMU for his involvement with the school’s annual drag show, a dancer and a cheerleader. He showed no indication that he was aware of or suffering from any preexisting medical condition.

His fraternal twin brother Scott, who is straight, dedicated song lyrics and an instrumental song on acoustic guitar to Brian while delivering his eulogy.

”Brian always knew what to say to me whenever I was feeling like shit,” Scott said. ”When I was having a bad body-image day, I would say to him, ‘I feel ugly as shit,’ and he’d be like, ‘Dude you’re hot, and if I wasn’t your brother…. well, you know,”’ Scott said, prompting laughter from his audience. ”He made me feel good about being me, and I treasured that so much.”

Described by many as a ”social-justice advocate,” Picone’s work went beyond Northern Virginia’s gay community. He was involved with The Center, D.C.’s GLBT community center, and La Clínica Del Pueblo, a Mount Pleasant clinic serving the Latino community. Picone himself was not Latino, but he marched with La Clínica during the National Equality March on Oct. 11.

The Equality March was the last time Billy Briggs saw Picone, whom he met five years ago while leading a GLBT peer education program at the Northern Virginia AIDS Ministry.

”He was never afraid to be his own person,” Briggs said. ”I remember him showing up in these leopard-pajama pants and he had glitter on his face and he was so happy and proud of who he was. I remember he would walk through the door and people just gravitated to him.”

Alejandro Asin, a friend of Picone’s and a senior at GMU, picked up on that free-spirited style and donned a purple cape and crown for the memorial service. Several others dressed similarly.

Ric Chollar of GMU’s Diversity Programs and Services for Lesbian, Gay, Bisexual, Transgender and Questioning Student Concerns attended the memorial and quoted from a speech Picone delivered at the school’s first “Lavender Graduation for LGBTQ students” earlier this year.

”In a culture where the validity of our existence is constantly in question, none of us can avoid being political,” read Chollar. “We as queer people cannot run away from differences. Above all we stand on the recognition that our difference has alienated us and after years of this alienation we come here together and seek collective liberation.

”This earth-splitting sensation of working together in resistance is what I will take away from my experience at Mason. I leave Mason with a knowledge that the spirit continues everywhere. This is just as much a beginning, as it is an end.”

Brian Picone’s family has asked that memorial donations in their son’s honor be made to La Clínica Del Pueblo (lcdp.org), or to Tenants and Workers (tenantsandworkers.org).

← Previous Story Law of the Land
Next Story → One Man's Mark