Gifts to consider this year from George Michael and Rufus Wainwright to Nirvana, Broadway and jazzy New Orleans

”You better watch out, you better not cry. You better not pout, I’m telling you why: Santa Claus is swinging in town.” Yep, it’s that time of year again. And if you haven’t already swung into giving action, here are a few ideas for music lovers on your list.

To make your spirit bright, you should start with the playful new holiday album from Kermit Ruffins, Have A Crazy Cool Christmas. Leave it to a Louis Armstrong-styled trumpet-playing singer to make any day a holiday — and any played-out holiday standard worth hearing anew, from the mostly instrumental jamming on ”Santa Claus is Coming to Town” to a boisterous, sauntering ”Jingle Bells” to an exquisitely simmering ”Little Drummer Boy.” Ruffins has an exuberance that’s as appealing as Crescent City itself. No wonder he’s a lead consultant for HBO on a forthcoming series about the slow-but-steady post-Katrina revival of his Treme neighborhood. The hour-long album includes a couple originals, including ”A Saints Christmas.” ”All I want for Christmas,” Ruffins sings on this bouncy tune, ”is the Saints in the Super Bowl.” 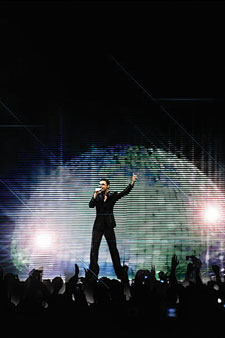 Obviously, the übermusical gift this year would be The Beatles box sets, featuring the remastered catalog from the greatest rock band, in both stereo and mono. But at over $200 each set, that’s a gift for only your überbest friend. So the next-best thing would be the most recent British sensation to expire: George Michael. Michael ”retired” last year, but not before exhausting himself with a three-year tour. The DVD Live in London is a perfect cap to a remarkable three-decades-long career. It’s also a kind of keepsake for anyone who saw Michael live last year, since most everything is the same here, from the set list to the enormous LED screen/stage contraption. With a voice as smooth and soulful as ever, Michael performs all of his biggest hits, including several from his Wham! days. The package includes a fascinating 40-minute behind-the-scenes documentary that’s nearly as invasive as if were shot by TMZ.

For the showtunes lover, consider The Sound of Music: 50th Anniversary Edition of the original Broadway cast recording, which includes a lengthy essay in its liner notes and several bonus tracks. Still, Mary Martin is no match for Julie Andrews. Or Ethel Merman. How is it again that Martin and The Sound of Music completely shut out Merman and Gypsy at the Tony Awards? You certainly won’t understand the situation any better after checking out the superior Gypsy – 50th Anniversary Edition. This would be a prized present even if your recipient owns another version of the influential musical, one of Broadway’s very best. As great as any actress who came after her (including Angela Lansbury, Bernadette Peters and Patti LuPone), quite simply, you don’t know Rose until you hear Merman sing the role. It’s hard to imagine anyone personifying the larger-than-life character more convincingly. Merman’s exaggerated and throaty singing style is pitch-perfect here. On ”Rose’s Turn” she’ll startle you with her harrowing, unhinged ferocity.

For the hard rock lover, there is a DVD that an NPR critic called ”one of the greatest live rock records ever made.” That’s debatable, of course, but certainly Nirvana Live at Reading would please – and it’s an improvement on the widely circulated bootleg recording. Recorded at England’s Reading Festival in 1992, or just one year after the band’s commercial breakthrough, the recording launches with a stunt about how mentally unstable frontman Kurt Cobain is – a joke that isn’t nearly as funny in hindsight, since Cobain committed suicide less than two years later.

For the pop lover who craves more melodious drama, or harmonious fireworks, Rufus Wainwright gives George Michael a good run for the money. Milwaukee At Last!!! is a real treasure. The DVD is as much of a documentary as a concert film, with a focus on the whole sparkling production, including interviews with Wainwright and members of his seven-piece chamber-rock band backstage and his many interactions with the audience. ”Between My Legs” is just one unbelievably wild must-see, climaxing with Wainwright singing and playing guitar while straddling his handsome German boyfriend’s shoulders. Yes, really. All throughout is Wainwright’s disarming stage presence and infectiously good humor. It seems awfully random that this industrial Midwestern town’s gorgeous Pabst Theatre was chosen for Wainwright’s first live recording. But Wainwright sings his heart out here, with the crowd egging him on, and sounds better than I’ve ever heard him live in our area. Maybe there’s something in the PBR.