Holding on to Discrimination

Anti-gay activists at CPAC attempt to hold the line against openly gay military service, even as Dick Cheney and others voice support for repealing DADT

This past Saturday, David Rivkin, Jr., and Lee Casey – two longtime senior officials in the Reagan and George H.W. Bush administrations – wrote in The Washington Post that the testimony of Secretary of Defense Robert Gates and Adm. Mike Mullen, the Chairman of the Joint Chiefs of Staff, about the ”Don’t Ask, Don’t Tell” policy meant ”Congress can no longer mandate discrimination in the armed forces on the basis of sexual orientation.”

The next day, former Vice President Dick Cheney, noting he ”think[s] society has moved on,” said on ABC’s This Week, ”My guess is the policy will be changed.” He went on to say, ”When the Chiefs come forward, and say ‘We think we can do it,’ then it strikes me that it’s time to reconsider the policy, and I think Adm. Mullen said that.” 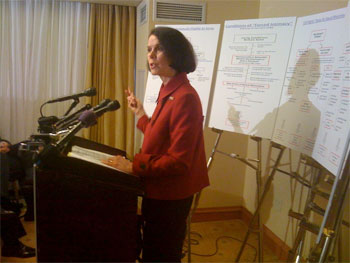 Elaine Donnelly speaks at a press conference to call for continuation of the military’s ban on openly gay servicemembers.
(Photo by Chris Geidner)

The strong words from three significant conservative thinkers from the Reagan and both Bush administrations this past weekend were not enough to stop Elaine Donnelly at the Center for Military Readiness from strongly supporting the current military policy at the first day of the annual Conservative Political Action Conference. CPAC, an annual gathering of conservatives, is taking place through Saturday at Woodley Park’s Marriott Wardman Park Hotel.

Within an hour of the former vice president’s surprise appearance at the conference on Thursday, at a side event in a small room off the main promenade of the hotel, Donnelly – joined by representatives from several other organizations – held a news conference where she said that President Barack Obama’s pledge to end the policy ”looked like letting down the troops” to her.

Tom Minnery from Focus on the Family called the plan a ”social engineering debacle,” while Tony Perkins from the Family Research Council told those gathered, ”It’s not an issue of two men or two women in camouflage holding hands.”

David Keene, from the American Conservative Union, said, ”Folks who don’t know very much about the way the military operates, or what is good or bad for it, are telling us how the military ought to be run.”

It was not clear whether Keene was referring to Adm. Mullen, a Naval Academy graduate who, at points prior to serving at the Chairman of the Joint Chiefs, served as the commander of three different ships and, later, the U.S. Second Fleet.

A not insignificant focus of the event centered around the impact of a change in policy on military chaplains, in part because of the attention drawn to the issue in a 5-page letter sent by the Alliance Defense Fund (ADF) to the president and Secretary Gates on Wednesday.

As Jordan Lorence, the senior vice president and senior counsel at the ADF, said at the news conference, ”This change in policy will negatively affect military readiness by creating a conflict of conscience for military chaplains. One of the first times in American history, there will be an open conflict between the virtues taught by the chaplains and the moral message delivered by the military.”

One specific example of such a conflict given by Donnelly was an assumption that chaplains would be responsible for ”diversity training” in the military, which she said involved ”having to teach the LGBT agenda to subordinates.” An example given in the ADF letter was ”whether chaplains could preach on their religious doctrines about homosexual behavior when those tenets contradict the military’s affirmation of homosexual behavior.”

Of these conflicts, the letter concluded, ”Forcing chaplains to deny their faith on these matters in order to serve in the Armed Forces is a great threat to the religious freedom and the right of conscience protected by the First Amendment.”

One of the more interesting comments came from Adm. James Lyons (Ret.): ”In the Navy, in the late 1900s, homosexuality was rampant in the United States Navy. It was so bad that mothers would not let their sons enlist in the Navy until the Navy cleaned its act up, and fortunately they did.”

Although they did, one of the resulting Navy operations – a sting operation that took place at a Navy base in Newport, Rhode Island, in 1919 – has been called ”the most extensive systematic persecution of gays in American history” by Lawrence R. Murphy in his book, Perverts by Official Order: The Campaign Against Homosexuals by the United States Navy.

As Murphy described in painstaking detail, ”The government employed sailors to entrap military men and civilians, employing deceit and feigning sexual endearment to collect evidence.” When the existence of the campaign was made public, ”the government manipulated the military ‘justice’ system to spare its leaders and embarrass its critics.”

Lyons, though, looked back on this time in the Navy’s history as ”fortunate” on Wednesday and said, ”On board ships, the Navy found there are three things unacceptable to good order and discipline, and its impact on military readiness: You cannot have a thief aboard, you cannot have a drug user or pusher, and we found out you could not have a homosexual.”

That finding, of course, has since been found to be invalid by another admiral, the Chairman of the Joint Chiefs, along with Vice President Dick Cheney – whose views were not discussed at the news conference – and several other prominent conservatives.

While those gathered in a small room off the main CPAC conference area pushed their support for the ”Don’t Ask, Don’t Tell” policy, Liz Cheney had spoken in the main conference hall to great applause during lunch on Thursday, introducing her father to a standing ovation as a surprise guest at the end of her speech.

After the speech, Liz Cheney told Talking Points Memo that her view on the policy echoed that of her father and not the ”Don’t Ask, Don’t Tell” policy’s supporters, saying, ”It’s time for it to end. The joint chiefs, certainly the chairman of the joint chiefs, has been clear about that and I think that the country really is at a place now where it’s time for it to end.”