Looking for Leadership on DADT

From an appearance by former chairman of the Democratic National Committee Howard Dean to six civilians who chained themselves to the White House fence, pressure mounted on Sunday in response to what is perceived as slow movement by the Obama administration on repeal of the ”Don’t Ask, Don’t Tell” law.

Dean told the crowd of more than 100 assembled in Lafayette Park on May 2 that the committee chairman running the DADT discussion in the Senate ”has the votes” to pass a repeal in his committee this year. 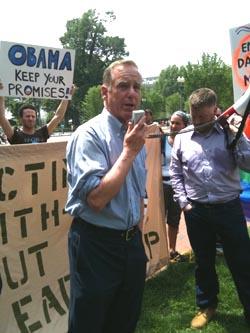 The rally, organized by Get Equal and other activist groups, had promoted the participation of Lt. Dan Choi and James Pietrangelo II, the two veterans who have twice been arrested for handcuffing themselves to the fence in front of the White House on Pennsylvania Avenue. On Saturday, the Servicemembers Legal Defense Network (SLDN) announced that its executive director, Aubrey Sarvis, would be speaking as well.

As the event unfolded on Sunday, however, word spread that Dean would be speaking. Before he addressed the crowd, Dean told Metro Weekly he had not planned to attend the event but was in the area for a Democracy for America fundraiser and supported the cause.

”It’s a cause I think is really important. I think equality under the law can’t be abridged under any circumstances,” said the former Vermont governor. ”Gay and lesbian Americans have given their lives for this country, and they should be able to say who they are proudly, and I think it will make the armed forces stronger, not weaker.”

Referring to Choi, Dean told the crowd, ”We can’t afford to lose any talented people.”

Dean added that Senate Armed Services Committee Chairman Carl Levin (D-Mich.) ”has the votes to tack onto the Defense Authorization bill, which must pass, the end of ‘Don’t Ask, Don’t Tell.’ That is the right thing to do for America, and I want to thank Sen. Levin for his courage and his willing to stand up and get the right thing done.”

Sarvis spoke of the recently released letter by Defense Secretary Robert Gates and Chairman of the Joint Chiefs of Staff Adm. Mike Mullen urging no legislative action on DADT repeal at this time – as well as the administration’s response to it. Referring to the backdrop of the White House, Sarvis said, ”There was no profile in courage Friday night behind me. It was politics as usual.”

As Choi was speaking to the crowd in Lafayette Park across Pennsylvania Avenue from the White House, six activists — Ann Tischer, Nora Camp, Alan Bounville, Natasha Dillon, Eiona DiBona & Mark Reed – wearing long-sleeved shirts to conceal their handcuffs, attached themselves to the same fence where Choi and Pietrangelo had been with four others two weeks ago.

After a few minutes of standing silently at the fence, the six – civilians, Choi later told Metro Weekly – stood on the raised cement, shouting slogans demanding equality. The crowd chanted in response, ”Yes, you can!”

Pietrangelo, noting that he was not joining the protest action ”for now at least,” said, ”I wish that President Obama had the courage of those protesters on the fence. There’s more of that coming, and we will keep doing that until we get full equality. Period.”

Choi and Pietrangelo, by D.C. Superior Court order, must stay away from the fence – and the block surrounding the White House — until their cases are resolved or face a contempt of court citation.

Roughly 30 minutes after handcuffing themselves to the fence, the six protesters’ cuffs were removed by U.S. Park Police and they were arrested and placed in a van for processing. On the afternoon of May 3, the six — who were held overnight — were released after agreeing to “post and forfeit,” which is not an admission of guilt but required them to pay a $100 fee.